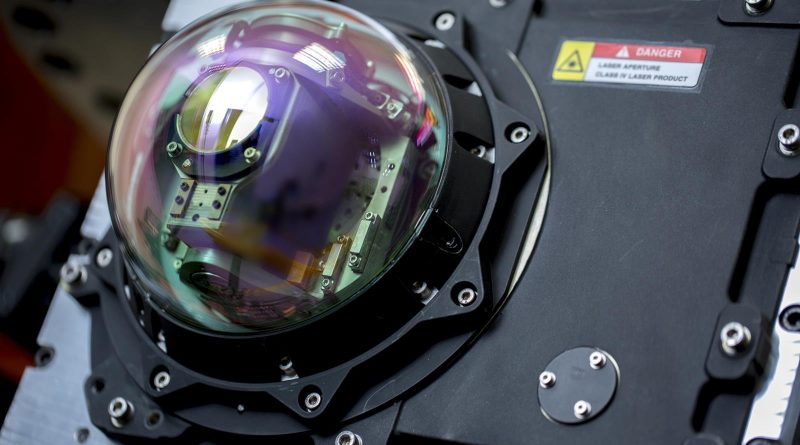 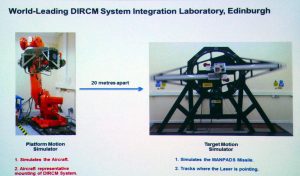 “Leonardo has been at the forefront of the development and manufacturing of DIRCM systems for the last 20 years. We began working with UK MoD on DIRCM in the late 1980’s and were selected in 1995 as the supplier of DIRCM pointer/trackers for the AN/AAQ-24 (V) Nemesis system, developing a successful partnership with Northrop Grumman for the design, manufacture and production of a series of DIRCM point trackers”, said Audrey Black, VP Advanced Targeting. “Since then, over 2400 combat-proven DIRCM pointer/trackers of various types have been built in Edinburgh and deployed on over 50 aircraft types. We continued to partner with Northrop Grumman on the next generation of DIRCM for the US Army-led Tri Service Common Infra-Red Countermeasure (CIRCM) programme”.

Based on this pedigree, know-how experience, customers and worldwide Infra-Red Countermeasures (IRCM) requirements, “we saw a market opportunity for a ‘readily exportable’ DIRCM system utilising our own world-leading laser manufacture and DIRCM point-tracker capabilities”, said Black.

Leonardo’s company-funded development and qualification program for Myisis DIRCM was focused on five key operational requirements: the protection of the full range of rotary, turbo-prop fixed wing and jet transport platforms against advanced MANPADS with a single design solution, a two-head configuration for spherical protection, a fully exportable product and the smallest, lightest and least power hungry multi-head DIRCM system, Leonardo claims, in addition to a spiral development path for emergent threats. 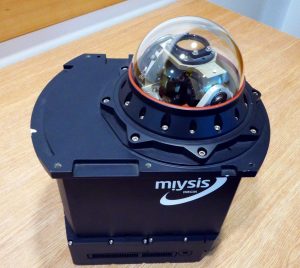 Based on these requirements, Miysis DIRCM has been developed to engage any IR MANPAD threat immediately after launch, regardless of the range from which it was fired. This required exceptional response speed, with very few moving parts, to defeat the most demanding very short-range attacks. To meet this challenge, Leonardo have integrated a pointer/tracker that draws on experience gained in the development of the ECLIPSE technology into the design. This has been flown against more than 100 missiles on international ranges with a 100% success rate and has been trialed as part of the UK’s CDAS (Common Defensive Aids System) Technology Demonstrator architecture. The new pointer-tracker technology follows on from ECLIPSE, an internally funded programme that was initiated in early 2007 to develop a new lightweight, low-cost pointer/tracker centred on a low-inertia, two-axis servo mechanism with a strap-down inertial sensor and advanced sightline control algorithms. This configuration, with all moving parts sealed behind a 14cm dome, allows for effective tracking through the nadir and provides superior sightline performance.

Leonardo is offering the Miysis DIRCM as a system which comprises a point tracker solution and a specifically developed Type 160 IRCM laser module in a baseline integrated turret solution characterized by reduced size (183mm wide, 270 mm long and 341 mm high), weight (16 kg) and power consumption (typical 190W with maximum 535W capable) which presents external airframe reduced drag. The Type 160 IRCM is described as a multi-watt, multi-band fiber-pumped laser, fully compliant with the requirements for DIRCM systems used to protect the largest strategic aircraft and support helicopters. The Type 160 IRCM laser provides high reliability for protection from attack by the full spectrum of Infra-Red (IR) guided MANPADS, according to Leonardo. “The laser in Miysis is based on our experience providing high-energy lasers for a significant portion of the world’s airborne laser designator market, with over 4000 laser unit delivered, including for the F-35 Joint Strike Fighter EOTS (Electro-Optical Targeting System), Lockheed Martin Sniper and Northrop Grumman Litening targeting pods, the Apache M-TADS (Modernized Target Acquisition Designation Sight), and our Type 163 laser targeting system for ground forces”, said Black.

There are other options, but Leonardo believe that this solution – using direct laser coupling to the pointer/tracker instead of fibre-optic links – is the best one solution at the moment, also with regard to reliability. As Miysis has been developed as a modular system, it can accept technology insertions to meet future threats. The Miysis also features an open modular architecture that allows for integration with a variety of missile approach warners, and enables operation as a standalone system or as part of a defensive aids suite. Furthermore, flexible installation options provide for a federated fit in the air vehicle itself or a pod-mounted configuration; the latter enables ease of installation (being carried on an external stores pylon), requires minimal aircraft modification (requiring only 28 V DC power), and enables capability rotation as required across a fleet.

Leonardo has developed a baseline configuration including two integrated laser pointer/trackers managed by an electronics unit, which is interfaced with the cockpit interface unit as well as the missile or threat warning systems. The electronic unit handles the whole threats engagement including the simultaneous engagement of multiple targets and the target hand-over between the two turrets. The whole suite weight is 37.6 kilograms, excluding the missile or threat warning systems. As part of an integrated DAS suite, the electronic unit interfaces (without the need for cockpit unit) with the suite controller, which in the case of the representative UK solution is the Leonardo DAS controller, already sold in different iteration to UK and international customers.

Given the critical nature of air platform protection, extensive test and evaluation is required of any DIRCM system. The Miysis DIRCM has been subjected to extensive development test and evaluation over the last nine years including both extensive laboratories and a specifically designed SIL (System Integration Laboratory) activities by Leonardo center of excellence in radar, laser and IRCM solutions in Edinburgh, as well as helicopter flight trials, dry and wet-shot live-fire testing, production standard system design verification and qualification testing carried out internally by the company. Developed internally by Edinburgh’s test team, the SIL system consists of a dedicated and health-protected facility centred on platform motion simulator based on a standard commercial ABB-provided automotive robot capable to simulate with complete fidelity the aircraft motion with a representative configuration of the DIRCM system suite installation with two Miysis turrets and two MWS sensor head units, represented during the press visit by Hensoldt MILDS Block 2 missile warning system, and a target motion simulator positioned 20 meters apart, which simulates the missile continuing rotation during the flight and incorporates the IR-guidance seeker. The rotating movement of the later target motion simulator and the IR-guidance seeker receiver allowed the Leonardo engineering and test team to test and qualify the system in laboratory and to develop the system tracking software and laser-jamming waveforms (jam code) to cope with present and future threats, in parallel to the insertion of new detecting and jamming technologies.

The UK MoD’s DSTL (Defence Science and Technology Laboratory) sponsored the Leonardo and Thales participation into the trial, with both companies investing in the integration of the system. The UK-MoD live-fire missile testing campaign was conducted over a two weeks’ period on Visdel FMV test range and saw multiple types of MANPADS system fired against an IR source mounted on top of a test building which accommodated the aircraft protection system suite. For the specific trials, the latter was accommodated inside a Terma Universal Pod including three Elix-IR sensor units and a Miysis integrated laser pointer/tracker with all the controller and ancillary’s systems. 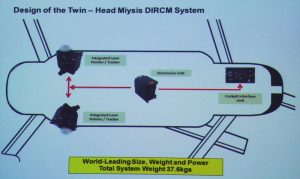 The Thales Elix-IR is a passive multi-function Threat Warning System that uses single-colour Infra-Red sensing technology to deliver simultaneous and unimpeded Missile Approach Warning, Hostile Fire Indication and Situational Awareness from a single sensor system to increase overall platform survivability. Elix-IR is an ITAR free UK sovereign capability, developed in collaboration with the UK MOD that assures a rapid and timely response to countering evolving threats and supporting new theatres of operation. Designed from the outset to provide the capabilities required to support a DIRCM and output data in support of off-board countermeasures, such as Smart Stores, it enables greater exploitation and utilization of platform capabilities that support broader operational employment and increased mission success rates.

No indication has been provided on the number and type of MANPADS which were launched but the UK MoD approved two slow-motion live-fire videos viewed during the press briefing showed the missiles following a jammed trajectory away from the IR source, and in at least one firing the missile went ‘miles away from the DIRCM’, according to Leonardo. The Miysis used a DSTL developed jamming waveform to confuse the missile’s guidance system, steering the missile away from the target, company representative elaborated. As well as proving the system’s basic capability, ‘the Leonardo and Thales team demonstrated how they have optimized the threat-warning/threat-defeat chain to thwart incoming missile as soon as possible”, the company said. Moreover, during the two-weeks multiple missile firing, which were all defeated by the Leonardo/Thales aircraft protection system, according to UK MoD releasable initial assessment of the Miysis DIRCM system effectiveness, the later performed ‘as expected’ by UK DSTL with the system having very quickly tracked (dry shots) and jammed (wet shots) every threat declared by Thales Elix-IR TWS. The Myisis DIRCM time to jamming was exceptionally quick, and the system was effective at both short and long ranges, Moreover, the Miysis demonstrated a capability to defeat two MANPADS missiles fired from the same point with a single laser point tracker, said the company. 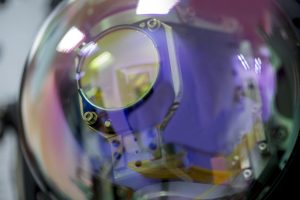 In addition to the UK MOD, a plethora of rotary- and fixed-wing platform could be potentially equipped with Miysis. The effectiveness of the system and Leonardo’s extensive domain knowledge with over 20 years of IRCM experience was surely behind the Canadian Department of Defence’s decision to select the Myisis DIRCM as part of a major upgrade to the Royal Canadian Air Force’s fleet of Lockheed Martin CP-140 Aurora aircraft. The DIRCM-based DAS in a baseline two turrets configuration which also includes Hensoldt AN/AAR-60  Block 2 MILDS system (with five warning sensors), forms part of the CP-140 Block IV Aurora incremental modernization programme (AIMP). Carried out by General Dynamics Mission Systems Canada, the latter also include Link 16 data link and Wideband SATCOM (WGS) and their capabilities integration including Myisis into CP-140 existing data management system and ground training facilities in order to ensure the operational relevance of the CP-140 Aurora until its eventual retirement in the 2030 timeframe, according to General Dynamics Mission Systems Canada award press release.  Deliveries of Miysis DIRCM hardware commenced in 2017, according to a Leonardo representative. In July 2018, during the Farnborough air show, Leonardo announced an additional customer which wasn’t named but was identified as Middle East-based. No further information has been released about this contract awarded in 2018 except that deliveries of hardware has already commenced.

Moreover, during the visit, Brendan Nolan, VP Sales for Radar and Advanced Targeting, unveiled that Myisis has been selected by Hensoldt for its Airborne Missile Protection System (AMPS). Miysis will be offered as part of the AMPS architecture for new customers, and also as a retrofit solution for existing users. Integration activities are well underway, Nolan said.

In a testimony to the 20 years IRCM experience and the long partnership with Northrop Grumman, Leonardo has been selected by the latter US group for its CIRCM (Common Infrared Countermeasures) solution to provide its ECLIPSE-inspired pointer/tracker in addition to Daylight Solutions, today part of Leonardo DRS (as DRS Daylight Solutions), providing the Quantum Cascade Laser (QCL)-based Solaris Module. Northrop Grumman was selected and awarded the US Army CIRCM program in August 2015. After a rigorous testing process to ensure system readiness for the demands of combat operations, in September this year, Northrop Grumman announced the CIRCM system has achieved Milestone C. This critical milestone, awarded by the US DOD Milestone Decision Authority, marks the end of the development and testing phase and enables the beginning of production and deployment. To achieve the Milestone C, Northrop Grumman said it has worked closely with the US Army to thoroughly test CIRCM. The system has undergone thousands of hours of laboratory, flight and free flight missile testing to verify its performance in a range of realistic combat scenarios.