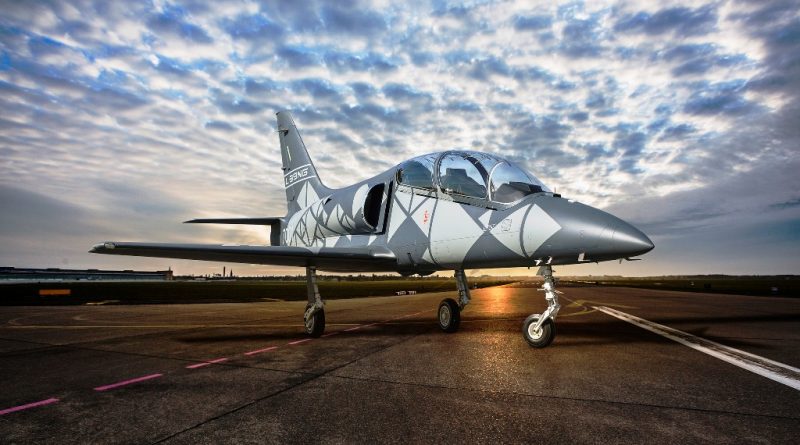 On Friday 12th October 2018, at 11:50, the first L-39NG pre-series aircraft rolled out from the hangar at AERO Vodochody AEROSPACE, the leading Czech aerospace company. This significant milestone has been achieved in line with the L-39NG project schedule and Aero is now going to prepare the aircraft for its maiden flight planned before the end of this year.

The rollout event was attended, among others, by military officials from a number of nations, L-39NG customers, together with political and diplomatic delegations including the highest Czech political representative, the Prime Minister Andrej Babiš. “Aeronautics has always been strong tradition in the Czech Republic. The L-39NG project is demonstrating that industrial capabilities are still present in the Czech Republic. It is important that the Government supports this project, which will contribute to Czech export by high technological value. It strengthens competitiveness of Czech industry,” said Andrej Babiš, Czech Prime Minister. 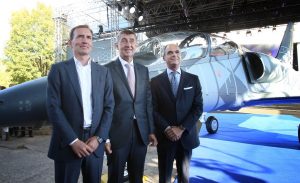 Aero Vodochody is a company with historically the biggest production of light jets in Europe and one of the biggest in the World (total production of 6,700 jets). However, it has been more than 20 years since a brand new jet aircraft rolled out from the hangar. “When we bought Aero in 2006, the company was in a very bad shape, the development of our own aircraft was not realistic. We have set up a strategy where Aero has become a major subcontractor for Tier 1 aerospace companies. Nevertheless, at the same time we have kept the key people from the development team in order to maintain our know-how. Today, it is evident, that we have made a right decision,” said Marek Dospiva, partner of Penta Investments.

Since 2016, Aero has a strategic plan to reinforce its position as a leading producer of jet trainer and light attack aircraft. The next generation of the legendary L-39, the L-39NG, represents the key asset to achieve this target. “The L-39NG is defining the future of Czech aviation by taking the best from its tradition, bringing modern technology, and providing the best training and light attack solution available on the market. The L-39NG is already attracting a lot of international attention and customers and will definitely strengthen the customer community we already have,” said Giuseppe Giordo, President and CEO of Aero Vodochody.

The project of the new jet trainer is supported by the strategic partner, Czech military company Omnipol, “Today´s rollout is a major milestone for the L-39NG. Omnipol very proudly joined the L-39NG Project in the June of 2015 as the strategic partner and equal co-investor alongside our colleagues from Aero Vodochody.” said Jiří Podpěra, President of Omnipol.

The L-39NG is a jet trainer and light attack cost effective platform.  The L-39NG is a single-engine two-seater with staggered seating and an advanced cockpit design that includes full glass cockpit, a sophisticated on board virtual training system and a Helmet Mounted Display. The L-39NG is a key component of an innovative training concept developed by Aero that includes state-of-the-art ground-based training devices, new learning methods and environment and extensive use of Virtual Reality and Artificial Intelligence technologies. The L-39NG has been designed as a maintenance-friendly aircraft in anticipation of many decades of service.

The development of the L-39NG has accelerated in the last two years in order to be able to deliver the first aircraft to the market in 2020. In 2017, the initial pre-serial production and the industrialization phase started including agreements with all key suppliers and partners of the project – both international and Czech companies (about 40 Czech suppliers). The certification of the new avionics and engine installation was already done on the end of 2017, while the certification of the L-39NG will be fully achieved before the end of 2019.

Aero Vodochody estimates the potential demand in the next 10–15 years for trainer aircraft will be up to 3,000 pieces. Current training fleets around the world are rapidly ending their lifetime and do not respond to the future needs of pilots training for the 4th and 5th generation fighters. In conservative scenario, Aero expects to deliver 150 aircraft in the next 10 years.

Before the L-39NG rollout, representatives of 18 states where air forces have experience in operating legendary L-39 jet trainers met on the 3rd  L-39 Users’ Group Conference. Most of the attendees of the conference took this occasion to see the next generation of the aircraft based on the successful training platform on the rollout ceremony.

The L-39NG aircraft is a modern and effective trainer designed as a unified, comprehensive training system for modern air forces. The L-39NG is based on the aerodynamic concept of the current L-39, but utilizes the latest technologies and equipment. Power is provided by the modern FJ44-4M engine supplied with the TAP Blue engine support service to ensure unprecedented airworthiness and predictable maintenance costs. The aircraft’s avionics are prepared to train future pilots of 4th and 5th generation aircraft and can be tailored to the customer’s requirements. The L-39NG is equipped with five hard-points for weapons. The aircraft also features a broad range of simulation technologies, including the integration into high-tech tactical simulation centres with the goal to increase training efficiency. Strategic partner of the L-39NG project is Czech company Omnipol. For more information, visit www.l-39ng.aero