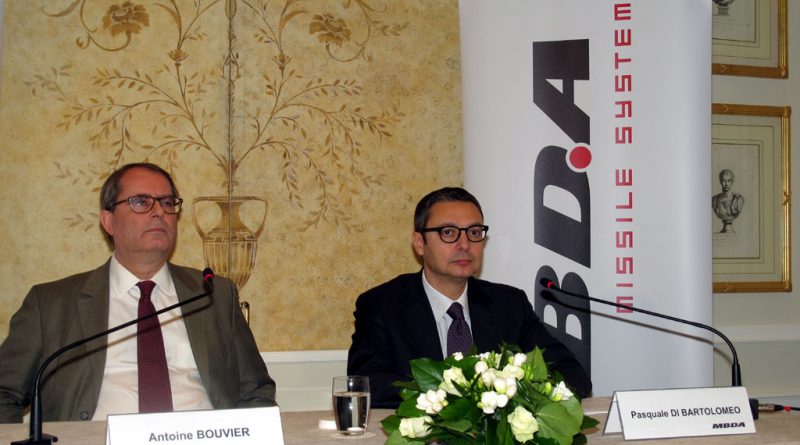 Antoine Bouvier considerations over the company good health were obviously in line with what said the previous day in Paris (to read EDR report on Paris press conference please clic here) Di Bartolomeo went in depth in the programmes regarding Italy.

The most recent success of MBDA’s Italy was the signature of the contract for the Marte ER (Extended Range) that will equip Qatar NH-90 naval helicopters. “The successes of this product, which is already part of the Qatar coastal batteries contract, confirms the company investment choices,” MBDA Italy MD said, adding that he wishes the fast-jet version of the missile will succeed in the Eurofighter campaigns requiring an anti-ship capability.

The Italian Navy is finalising operational requirements for the modernised version of the Teseo surface-to-surface antiship missile. Budget requests for the development phase have been forwarded, the programme aiming at ensuring the antiship capabilities of Italian Navy vessels as well as maintaining the competences in this field of MBDA Italy. Both sides are willing to proceed, the programme will exploit synergies with the Marte ER, and MBDA hopes to start it in late 2018, early 2019.

The political situation in Italy brought to a delay the signature of the CAMM-ER contract: when everything was ready the disbandment of the Parliament did not allowed making the last step. Funds have been frozen, so when the new Government will be in charge the process should be concluded in relatively short time. The new missile will replace the Aspide/Spada in Air Force and Army service, while the Navy might also opt for it to arm some naval units also aimed at the export market. Some export requirements already exist for the CAMM-ER, such as the HM (High Mobility) SHORAD for Spain and the Narew SHORAD for Poland. The contract to be signed includes a feasibility study for a multi-layer capability to be provided by the CAMM-ER in the SHORAD segment and by the SAMP-T in the extended range segment. MBDA Italy will definitely participate to the activities that will start in this decade aiming at upgrading the Meteor missile in view of the MLU that will be needed in the 2020s.

Underlining the need to reduce the time-to-market of new programmes Di Bartolomeo highlighted the changing in the technical structure of the company, the technical management having been split in two: the engineering management takes care of the programmes while the Chief Technical Officer department looks at innovation, technologies, future systems and links with SMEs. Antoine Bouvier underlined how much the roadmap on antiship technologies is developed in cooperation with Leonardo, highlighting the closeness with the Italian main defence group, which is also a stakeholder in MBDA, its participation in the European missile company having been clearly confirmed by the new CEO Alessandro Profumo.