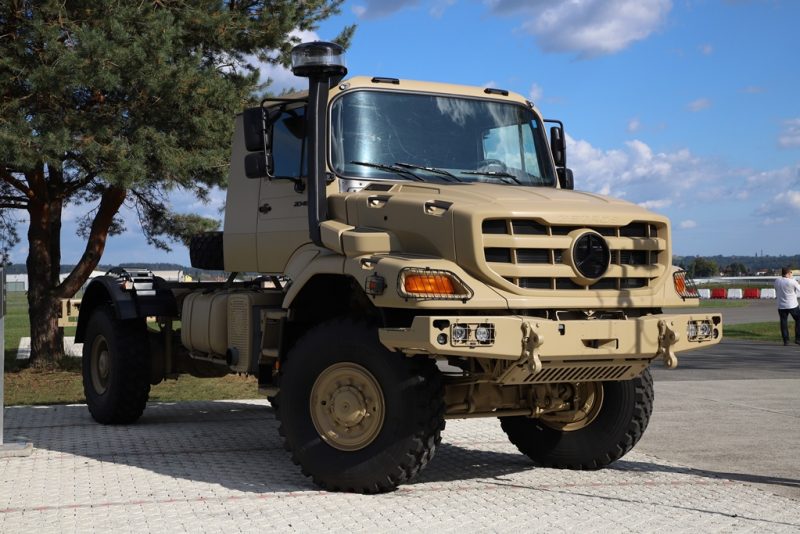 It is in the Erzberg mine, a large open-pit mine located in Eisenerz, Styria, in the central-western part of Austria, 60 km north-west of Graz, that Mercedes-Benz Special Trucks unveiled on September 29th the latest version of its New Generation Zetros high mobility trucks, the Zetros 4×4. The 6×6 model was unveiled in 2019, the two-axles version adding a new member to the family. The presentation included however many more vehicles, as Mercedes-Benz gathered at the Erzberg mine event also a number of companies producing vehicles based on its heavy duty chassis, therefore it was a busy day of driving through the obstacles created in a secluded area of the mine.

Mercedes-Benz Special Trucks  representatives explained the decision to maintain a bonneted trucks line as this has a number of advantages compared to the cab over engine design; first of all it allows reducing height by 0.6-0.7 meters. The fact that the seat is over 1 meter behind the front axle makes the ride smoother, which allows maintaining a higher speed when travelling cross-country. Finally the access to the engine is much easier, and as the cabin does not have to be tilted forward there are no problems should remotely controlled weapon stations and antennas be installed over the cabin roof.

The ladder chassis and the drivetrain leverage the experience acquired by the company with its Actros and Arocs trucks, commonality also ensuring ease of logistic support through the nearly 5,000 Mercedes workshops spread worldwide. That said, many elements have been strengthened for heavy duty use, i.e. suspensions that are fitted with stronger leaf springs and shock absorbers and which travel is extended by 40 mm.

At the Graz display, the previous day, a pre-production Zetros 4×4 was visible, fitted with the Allison transmission, which power take off was to be linked to a pump, the vehicle being aimed at airport firefighter service, its cabin been fitted with a bench at the rear hosting four people. A 2-speed transfer case with a 1.4 ratio allows maximum mobility on deep lopes and in cross-country terrain. A winch is usually installed on the right side of the vehicle, behind the 290 litres standard fuel tank (390 and 500 litres available as option), allowing operations both forward and backwards, central tire inflation system being available as option, as well as a cyclone air filter for customers acting in sandy and dusty areas.

A semi-trailer version, with a 4.7 meters wheelbase, and a tipper version with the same wheelbase of the standard one but with a shorter rear overhang, 1.2 meters, are also available.

Full production of the Zetros 4×4 should start in mid 2022. At Erzberg it was possible to test another pre-production truck. The ride was pretty smooth even at high speed over bumpy terrain, but what was considerable was the capacity of the truck to descend a 60% earth slope using only the engine brake, the driver taking his feet off the pedals, while honestly admitting that we were definitely not fully loaded. Climbing those ramps was not an issue, as well as travelling on the 30% side slope.