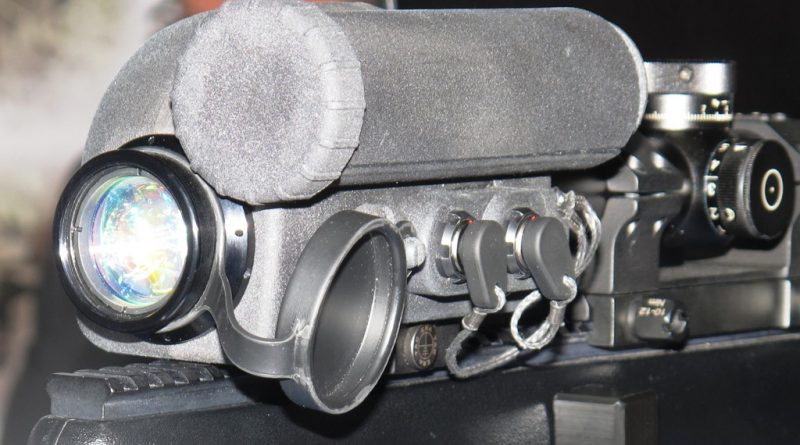 Two years ago a very promising system was on display at the AIM Infrarot-Module booth in Prague; it was a clip-on thermal sight for snipers and designated marksmen operating in the 0.9 – 2.5 μm wavelength range, what is known as extended SWIR (Short Wave InfraRed), the SWIR band being usually considered that between 0.9 and 1.7 μm. At that time the system was hosted in the Huntir Mk2 housing, a much bigger box compared to what was visible as a 3-D printed model. The technology demonstrator of Prague evolved into a prototype, seen at Eurosatory last June, and presented again in Prague this year, where EDR had the chance to discuss the system status with company representatives. The configuration of the HuntIRSW Medium Range Clip-On Targeting Sight, as it is defined, is not yet fully frozen, as the launch customer, who required the development of that sight, asked for some minor modifications following testing. The HuntIRSW was developed at the request of the Kommando Spezialkräfte (KSK), the German Special Forces Command, its wavelength band allowing to see both the thermal and reflective images, to provide much better performances in fog and haze conditions, to avoid mirage when shooting with a hot-barrel rifle, to see behind windows, and to provide a much better image that in most cases allows positive identification of a subject. Compared to the prototype exhibited, the KSK required a slightly bigger optic in order to improve the range; this will marginally increase the weight, up to 1.1 kg with batteries compared to the current 1 kg, and dimensions, current ones being 145 x 110 x 95 mm. A clip-on x1 system, the HuntIRSW battery provides a minimum operating time of 4 hours. No details on the new field of view, currently 8° x 6°, and range, estimated at 1 km, were provided. This optimisation has pushed to the right the qualification date, which is now expected for the second half of 2019. At the Future Forces Forum the HuntIRSW was exhibited coupled to the Schmidt & Bender 1-8×24 PM II Short Dot Dual CC sight, used on the German Army G-28 DMR, the AIM product being aimed both at the KSK and at the Green Army.