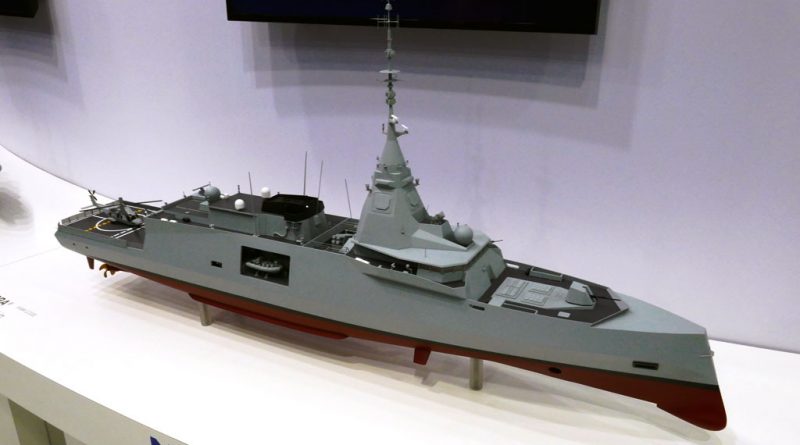 Unveiled for the first time at Euronaval 2016, the 4,000t Frégate de Taille Intermédiaire (FTI) or Belharra mid-size frigate was developed by Naval Group (previously DCNS), to satisfy both the French Navy requirement to deploy 15 heavily-equipped frigates based on the two Horizon-type ship, eight FREEMs and five FTIs by 2030, and the needs of naval forces which cannot afford a FREMM-like platform, while maintaining most of the combat capabilities. During the pre-Euronaval 2018 interview with Naval Group CEO’s Herve Guillou, he highlighted the central role of the FTI’s Belh@rra export based-design for the shipbuilding group in the next 10-15 years. Both this light but heavily-armed and ‘digital’ frigate and the Go wind corvette families belong to the most request segments of combatant vessels in the years to come.

The French Direction Générale de l’Armement (DGA) notified to today Naval Group, the reported EUR3.8 billion-contract for the five FTIs on April 2017, the first to be delivered in late 2023 and be certified as fully operational in 2025, after operational testing and evaluation. According to the LPM 2019-2025, all five FTIs will be contracted and two will be delivered within the LPM timeframe, while the remaining by 2029.

Capable to be employed in all warfare domains including anti-air, anti-surface and anti-submarine warfare and support special forces operations in addition to deploy one helicopter and for the first time an unmanned air vehicle at the same time, the FTI has been developed to be capable of conducting a wide range of missions, from high-level warfighting to maritime interdiction operations and crisis prevention. Being provided an overview of FTI capabilities during Euronaval 2018 by the industries and other entities involved in the program, EDR understood the FTI design is in an advanced stage of development process with a major (critical) design review planned by mid next year ahead of starting manufacturing phase. 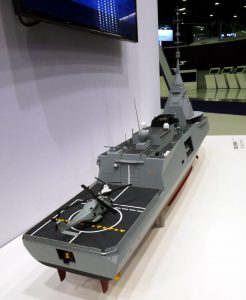 The French Navy’s digital FTI design is based on a 4,250-tonnes full-load displacement, 122-meters long and 17-meters large platform with an ‘inverted bow’ design intended to improve seakeeping in high sea states and a rudder-roll stabilisation system in addition to fixed stabilizing fins. However, Naval Group has designed the FTI to be modular and scalable with the possibility to introduce a hull middle section up to 9 meters to satisfy potential export customers’ requirements for additional spaces for example to accommodate a mission bay. Thanks to the same platform design flexibility, the FTI propulsion is based on a 32-MW CODAD-arranged package with four MTU 16V 8000 M91L 8 MW-each diesel engines allowing to reach an over 27 knots maximum speed but the ‘export’ design could accommodate a more powerful 10 MW diesels-based propulsion package capable to achieve 29 knots. Thanks to the FTI’s digital design and extended automation, the French Navy’s frigate will be manned by 125 elements including the helicopter detachment, but the platform design can accommodate up to 149 elements.

Since its unveiling the FTI topside was refined with modification and antennas and sensors repositioning to reduced radar-cross section and potentially electromagnetic interferences, improvements to ship operations, the latter for example with the incorporation of full bridge swings, but the main innovation which has been at the heart of the program since its conception is the ‘digital nature’ of the new combat and platform systems.

The FTI incorporate a digital backbone based on two data centres where all the shared computing power is concentrated, which are located inside the Panoramic Sensors and Intelligence Mast (PSIM) module, which Naval Group has incorporated for the first time on the Gowind corvette design, and on the ship itself for redundancy and higher survivability. This digital backbone with an highly-capable cyber-defence capability allows for obtaining usage and diagnostic information, enhancing maintenance and logistic support in favour of reduced life cycle costs. The FTI also incorporates a new ‘digital warfare centre’ located behind the platform conduction and navigation bridge and capable to manage around-platform surveillance and inner-layer protection. As anticipated, the FTI will be equipped with a combat system centred on Naval Group-developed advanced digital infrastructure design and the PSIM (panoramic surveillance intelligence module), both used for the first time on a French Navy’s platform. The single pre-outfitted multi-deck steel PSIM structure incorporates the ship’s command information centre (CIC) with Naval Group SETIS command management system (CMS) and a package of sensors equipment, antennas and turrets. 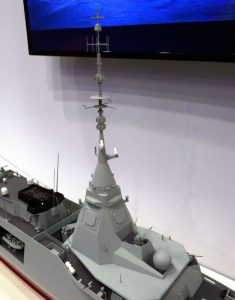 The FTI also features a flight deck and hangar to accommodate an NHIndustries NFH90 and for the first time one 700-kg multipayload VTUAV, the VSR700 being developed under a program carried out by French Navy, DGA, Airbus Helicopters and Naval Group. For surface operations, the FTI will accommodate two 9.5-meters assault RIHBs including ECUME special forces boat.