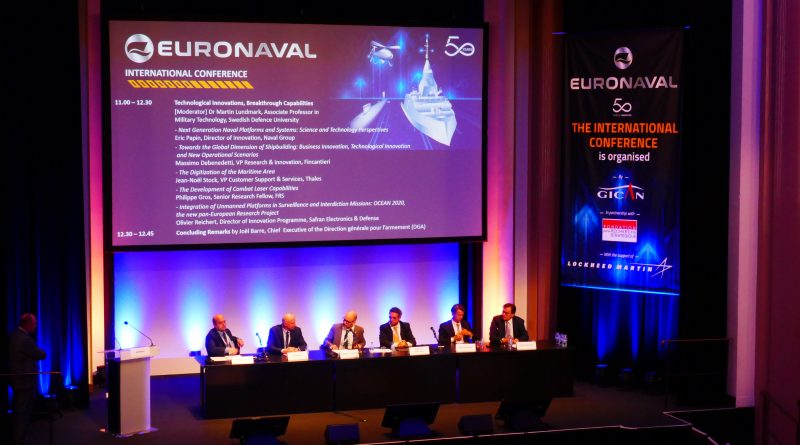 Bringing together high-level speakers from industry, ministries, navies and think tank, to address current and prospective important topics of naval defence, the international conference preceding the Euronaval exhibition opening and organized by GICAN in association with the Foundation for Strategic Research (FRS), has been focusing in particular on the maritime ambitions of Great-Power, technological innovations, breakthrough capabilities and the digitization of the maritime domain. In addition to national development, the latter is also seen the Old Continent developments with the European Union focusing on maritime security and defence themes, as well as join procurement programs and potentially industrial alliance on the horizon.

Introduced by the director of FRS, Dr Xavier Pasco, and opened by Hervé Guillou, CEO of Naval Group and GICAN President, the first part of the conference provided an insight to the maritime ambitions and the (re)affirming of power by NATO naval forces, in particular the German and the UK navies, and an historical and present excursus on the ambitions of the worldwide main navies, without forgetting an overview analysis of the Chinese navy and military shipbuilding power, the latter devoted to both national and export expansion.

Through an introduction provided by Vice Admiral (ret) Patrick Hébrad, associate research fellow, FRS, as moderator, the audience has been taken through the current and future challenges the NATO naval forces are facing and how Russia and China are respectively regaining momentum and expanding toward a more than regional power, near and away from the Alliance borders.

Vice Admiral Rainer Brinkmann, Deputy Chief of the German Navy, Commander German Fleet and Supporting Forces, has outlined the future of the service, which has in the past focused more on peace-enforcing and humanitarian operations, neglecting high-end operating environments. Today, thanks to the increasing national military budget, the German Navy is refocusing its capabilities towards a more balanced approach toward the protection of the homeland and against high-end threats. Among other assets and enhanced capabilities, the new frigates under procurement with programme MKS 180 will be capable to deal with high-threats environments. Regarding the future force development and partnerships with nearby nations and allied, Germany Navy is looking to strength its role in the Baltic Sea and forming a dedicated MCC. The recent agreement on submarines with Norway is an example of partnership which goes beyond the joint procurement, focusing on training, operations and logistic support. 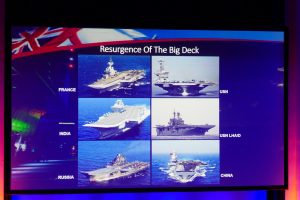 With the entry into service of the Queen Elizabeth-class two aircraft carrier and the F-35B, the UK is regaining a power projection capability which was lost years ago with the retirement of conventional aircraft carriers. The maritime task group (MTG) centered on these platforms and their air group can provide the UK with both a deep strike as well as amphibious enabling capabilities thanks not only to the F-35Bs but also to a choice of helicopter types ranging from ASW/ASuW to AEW&C and amphibious support with Merlin family and littoral warfare warfighting capabilities with new Wildcat rotary-wing platform. Commodore Steve Allen, Assistant Chief of Staff has highlighted that current initial operational flying trails with the F-35B are going well, having conducted vertical landing, sky-jump and shipborne rolling vertical landing. The UK aircraft carrier procurement program has been structured to give a 100% availability with one platform and 40% with two platforms, gaining an initial operational capability with air group in 2020. 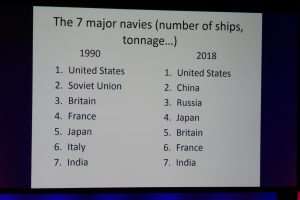 Around the world, the observers can see the resurgence of the ‘Big Deck’ with UK, India and China returning or accessing to aircraft carrier operations in addition to US and France.

An interesting analysis by Alexander Sheldon Duplaix, senior research fellow, provided and in-deep analysis of the worldwide maritime ambitions where 18 years from the almost end of the Cold War, the seven major navies for number of ships and tonnage are today the US at the highest place followed by China, Russia, Japan, Britain, France and India. In this timeframe, China has gain not only access to this top parade but also has been continuing modernizing its fleet with new ships and systems. The club of nuclear naval power has expanded and now including in addition to US, Russia, UK, France also India, in addition to Pakistan and Israel nuclear-capable cruise weapon carrying conventional submarine and North Korea conventional underwater platform capable of short-range ballistic missile operations. An expanding number of navies are looking to gain a regional power presence with different scopes forcing other contenders to counter this race. The anti-access/area denial (A2/AD) weapons namely the Russian hypersonic Zircon missile and China’s Anti-Ship Ballistic Missile, are denying the cruise and ballistic missile defence by western navies. 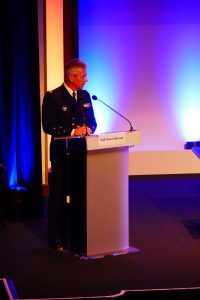 In this worldwide naval domain, as explained by Marc Julienne, associate research fellow, Asia department, FRS, the Chinese shipbuilding industry has expanded and introduced modern combatant and support ships not only to satisfy national requirements but also export market entering into competition with western and local shipbuilders. The Chinese navy has been provided with platform capable of long-range high-seas strike and defence capabilities, nullifying the technology gap with western navies.

The bridging between the geostrategic and the technological innovation session was provided by the deputy chief of the French Navy, vice admiral Denis Béraud, who provided an overview of the present and future threats in the worldwide waters, focusing on the service’s frontline capabilities in particular on surface maritime surveillance. The latter activity sees the French Navy’s plans toward the procurement and equipping the patrolling fleet with small UAVs and then in the 2025 timeframe the larger combatant vessels with more capable unmanned air platforms.

The second part of the conference, moderated by Dr. Martin Lundmark, associated professor in military technology at the Swedish Defence University was focused on ‘technological innovations and breakthrough capabilities’ and gave on overview of the main industrial and technological developments and challenges in the shipbuilding and weapon and sensors sectors. Speaking about the ‘invulnerable ship’ and the need to maintain the operational advantages facing of all kind of threats, Eric Papin, director of innovation of Naval Group has evidenced the designing of a smart, digital connected cybersecured ship based on an optimized integration of sensors and effectors.

He also pointed out the need to improving energy autonomy with energy mutualization and sources hybridation together with increased availability thanks to predictive maintenance assistance and remote-assistance services. 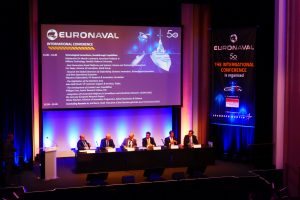 Fincantieri’s VP research & innovation Massimo Debenedetti has evidenced the vanishing of the distinction between physical and cyber spaces, with the requirement for vulnerability test on IT & OT networks in the design phase as well as cyber risk assessment, on-board intrusion detection system and security operation centre ashore. Looking to the possibility for ships to become autonomous, he pointed out a number of constraints which are difficult to overcome.  Jean-Noël Stock, VP customer support & services for Thales has provided an oversight on predictive maintenance, deep learning and neuronal recognition while Dr Philippe Gros, senior research fellow, FRS, dealed with the development of laser weapons for naval combat. The EDA’s Ocean 2020 technical demonstration program of enhanced situation awareness in naval environment with the use of unmanned systems was presented by Olivier Reichert, director of innovation programme, safran electronics & defense, who highlighted the involvement in two operational demonstration of maritime surveillance capabilities of 20 types of unmanned systems and their integration in the maritime domain arena. 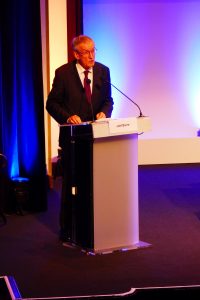 Outlaying the last French Government and Ministry of Defence’s actions to support the national naval industry, where innovation and technology development are leading the working progress together with the safeguarding of small-to-medium companies, the head of MoD’s procurement agency (DGA) Joël Barre has outlined how important is the export market, which is being sustained with ad-hoc actions, such as R&D and technologies as well as investment. A multifaced approach primarily focused to maintain the necessary industrial skills and technological edge in the naval domain, otherwise exposed to the completed loosening if not cultivated. The head of French procurement body highlighted how in addition to national naval development, the European countries and naval defence needs to work together and in this direction he anticipated that during the Euronaval exhibition, the French MoD will join the logistic support ship (LSS) program managed by OCCAR joint procurement agency on behalf of Italian MoD to satisfy its FLOTLOG (Flote Logistique) program requirement to build and operate up to four new LSS (3 +1 options), which procurement contract is expected to be signed in 2019. In addition to common French and Italian shipbuilding and life cycle cost benefit, the program is expected to be one of the basis of the joint French and Italian Government and industrial alliance in the naval domain, leading hopefully to a stronger European defence and industry.