The Bauman Moscow Technical State University recently developed a new modular rocket-propelled grenade launcher that allows various elements to be put together to form a weapon that can be fired in salvos. The new system leverages the work done on the 61 mm calibre RPG-34, which is currently undergoing testing by Governmental authorities.

The ammunition is contained in a disposable tube, which is 750 mm long, 160 mm wide and 120 mm high, its weight being 4 kg, while the grenade initial velocity is 140 m/s. The warhead is of the multipurpose type: the front of the warhead contains the HE explosive, followed by the fragmentation element, the delay system, and by the shaped charge with copper liner. The delay element ensures that the shaped charge is initiated first, the HE detonation coming slightly after in order to maximise the shock-wave effect especially against infrastructures. A single warhead can defeat a 300 mm thick brick wall opening a 0.2 m2 breach, however combining the effect of three rounds fired in volley the thickness increases to 800 mm, a 700 mm concrete wall being defeated by the volley, a single round ensuring its effects against a 200 mm wall. The volley effect is obtained thanks to the less than 0.5 meters grouping at 150 meters, the maximum range in direct, maximum sighting range being over 400 meters. As for armour vehicles, the shaped charge warhead is capable to defeat 300 mm of rolled homogeneous armour. The fragmentation element ensures good lethal effects against troops in the open, neutralization radius being of over 13 meters against personnel wearing Class 2 body armour. Other types of warheads are being considered for the future.

A peculiar attachment system has been developed by the Bauman Moscow Technical State University to put together the ammunition, which ensures both mechanical and electric connection.

An iron sight weighing 0.5 kg can be added to the launch tube, however the optimal configuration includes a fire control device fitted with a laser rangefinder providing the distance, hence the elevation, and an inertial platform providing the lead angle against moving targets. The FCS can be fitted with day/night sights, the user aiming with both eyes open, as the right one looks at the target while the left one sees the correction. The FCS weighs 1.2 kg, thus a three-tube configuration with the sight weighs 13.2 kg, well in the limits of a manportable system. 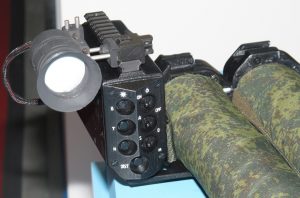 The system is intended for squad-platoon level use and is to be used against light armoured vehicles, personnel and infrastructures. It will soon start trials and the concept has already been presented not only to Russian officials but also to numerous other countries.