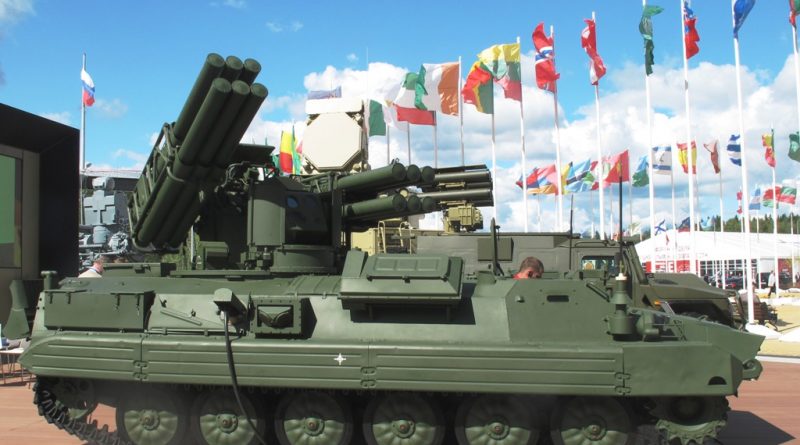 On Day 2 of Army 2018 the Nudelman Precision Engineering Design Bureau, part of the High Precision Weapons holding, unveiled the first serial production example of its Sosna air defence system, which is currently entering service with the Russian Army, the name being however apparently being that used for export. The system is built around the 9M340 Sosna-R (SA-24 Pine for NATO) a supersonic two-stage beam riding missile; at 42 kg in its canister, the Sosna is 2.4 meter long, slightly over 1 meter when in flight, and can reach a velocity of over 900 m/s. The Sosna module hosts 12 missiles in two clusters of 3×2 missiles, and does not use a radar, thus it is completely passive and immune from anti-radar missiles, cueing being provided by a radar equipped command post located far from the launcher vehicle. 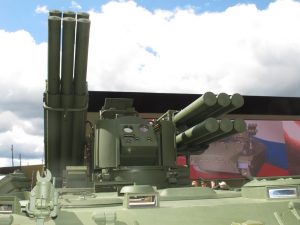 Target acquisition and tracking is done by the electro-optic gyro-stabilised platform, which includes a TV channel, a thermal imaging channel a laser rangefinder and a laser beam emitter ensuring missiles guidance, linked to the command and control system. Engagement can be fully automated, however the system can also be used in the man-in-the-loop mode. According to the company the weight of the combat module is reduced to half that of previous similar systems, allowing it to be installed on vehicles with a payload capacity of 3.5 tonnes. While the Russian Army will receive the system installed on the MTLB amphibious tracked vehicle, the service is considering also other chassis, the integration with the BTR-82A being planned soon, another candidate being the BMD-4. 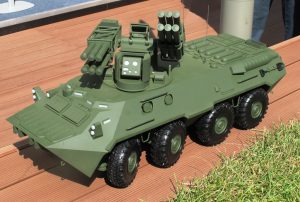 The system, which will replace SA-10 based systems such as the 9K35 Strela-10 (SA-13 Gopher for NATO) doubling the range, a key advantage when looking at the increased range of helicopter-borne missiles. The Sosna will ensure a defence envelope of 10 km in range and 5 km in altitude, engaging targets with speed up to 500 m/s (nearly Mach 1.5). The system has an elevation range of -5°/+82°, and can be reloaded in less than 10 minutes.