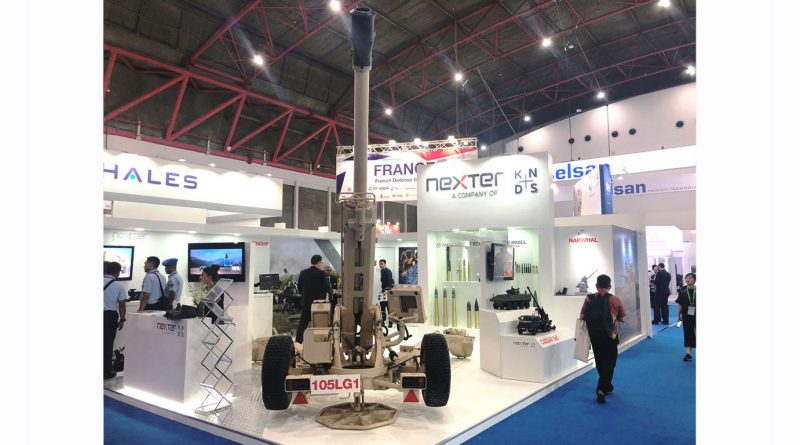 Light artillery proved to be a successful item in the Far East, the need for quickly shifting firepower exploiting helicopters having led this area to become an interesting market for 105 mm howitzers. It does not come as a surprise if the most prominent system in the Nexter stand is the 105LG1 cannon, which is in service in numerous foreign countries. Fitted with a 30-calibre barrel, the 1.5-1.6 tonnes system, weight depends on configuration, features a high accuracy, it is often nicknamed “sniper”, and can be easily transported under sling by a medium helicopter. The gun is made ready for fire in around 30 seconds by a crew of five, firing rate being of 12 rounds per minute, maximum range being of over 17 km. Currently the Indonesian Army fields over 230 105 mm guns, however these are all M101 or derivatives, with 22- or 34-caliber barrels, with respective weight of over 2.2 tonnes or 4.3 tonnes. The Indonesian Army, which has already in service Nexter artillery products in the form of the Caesar 155/52 gun, might thus well be in the need of updating its light artillery, at least in part, adopting a lightweight long range system.

The last success of the 105LG1 was announced last April at DSA in Kuala Lumpur, when the Malaysian Ministry of Defence announced the acquisition of 18 such guns. The first six guns should be delivered in November 2019, the last systems reaching the Indonesian Army in February 2020. The contract also included an undisclosed amount of ERG3 ammunition as well as Bacara ballistic computers. The LG1 is also in service with Belgium, Canada, Colombia and Thailand.