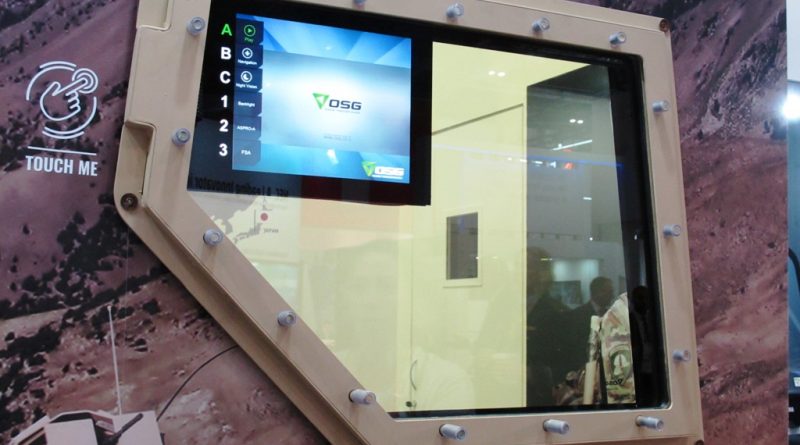 “As a vehicle commander I would have loved not to have a computer on my lap, in order to be able to dismount quickly when needed,” EDR On-Line is told at the Oran Safety Glass (OSG) booth at DSEI. The Israeli company is one of the main armoured glass producers, and at the London exhibition introduced the ScreeneX, an integrated LCD window display that can be integrated anywhere within the glass. Similar solutions were already available from OSG, however this time not only the systems features a colour screen, but this is also a touch screen, thus it avoids the need of a keyboard. The ScreeneX can be connected to a Battle Management System, showing the tactical situation on which the commander can operate touching the screen in front of him. It can also be linked to a thermal camera or an image intensifier, helping the driver at night, or with a rear camera. These are only a few examples. To maintain the glass protection level the rear of the screen is overlapped with a steel plate.

Looking forward OSG is already thinking at see through solutions on which embedding multimedia and multi-layered images. Currently the main problem that needs to be overcome is the adaptation to the different background light conditions in order to ensure maximum readability. “The technology exists,” OSG representatives say, “but we will need a few years to adapt it to the battlefield situation.”

Researching such new solutions didn’t distracted OSG from its main business, which is producing armoured glass. Currently the Israeli company, with a sister company in the United States and a representative office in Germany, is working on many solutions. Exploiting the ELP (Elastin-Like Polypeptide) does allow to provide better ballistic properties at a cost of about 15% more than standard solutions. This allows however to reduce the weight by 20-30% in average, a STANAG 2 glass being 49 mm thick compared to the 64 mm of a conventional armoured glass. Considering an MRAP-like vehicle carrying a crew of two and six dismounts, the weight saving is the equivalent of that of an extra person. As for ceramic-based transparent, the proposed solution being named Ceralite, their price is still somewhat high, according to OSG, the company considering that it might become affordable, at least for Tier 1 armies, in the coming years when it will become possible to produce tiles of bigger dimensions.

Investments are considered vital in order to maintain the company position on the market, considering the possible increase in the armoured glass business in the military due to the introduction of windscreens in 6×6 armoured personnel carriers for better situational awareness. OSG is currently the major player in the United States, where its market share in the military vehicles is around 42%, and has a considerable footprint both in Germany and in the United Kingdom, in the latter mostly thanks to the Ocelot programme.