Fresh from his party’s landslide national assembly victory on Sunday 18 June, a buoyant President Emmanuel Macron flew into Le Bourget for the inauguration on Monday 19 June, despite amazingly high temperatures, on a French Air Force Airbus A400M Atlas and toured the exhibits of French companies including Arianespace, Dassault Aviation, Daher, Safran and Zodiac. The new head of state was accompanied by GIFAS new president Eric Trappier and Emeric d’Arcimoles, the commissioner-general of the show. Despite the unprecedented security, Emmanuel Macron look relaxed and took the time to speak with show attendees as he toured, among others, the Futures Pavilion, the USA exhibit and the Kawasaki P-1 Japanese maritime patrol aircraft, one of the several debutants at this year’s venue. In a visit that took up much of the day until he left before 4 pm in a French Air Force Super Puma, Macron also had lunch with a group of French SMEs, where he discussed his coming plans for growth, fostering innovation and job creation. 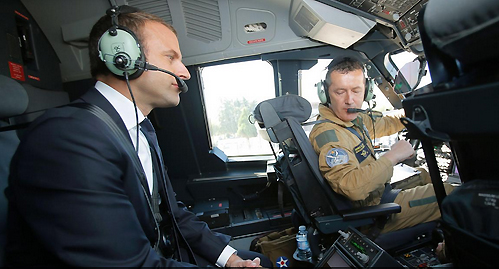 This 52nd Paris  Le Bourget Air Show was a remarkable success with a record number of exhibitors and 150 billion dollars’ worth of orders announced, despite the slight drop in the number of visitors. A total of 3,450 journalists from all over the world attended the show. Some 140 aircraft were on display, including the Airbus A321neo, Airbus A350-1000, Boeing 787-10, Boeing 737 Max9, Kawasaki P-1 maritime patrol aircraft, Mitsubishi MRJ90, Lockheed Martin F-35 fighter plane, TAI Hürkus trainer, Diamond Dart 450 at Le Bourget for the first time. Dassault Aviation’s Rafale and Falcon 8X, the Airbus A380 and A400M, the Airbus Tiger and NH90 Caiman helicopters were popular with the public.

Present during the show were 290 official delegations from 98 countries and 7 international organizations, including 160 official defence delegations from 86 countries and 4 organisations (NATO, the UN, OCCAR, the EU), including 16 foreign ministers, 40 chiefs of staff, 20 deputy-ministers, 110 civilian and institutional bodies with 15 ministers and 40 directorate from General Aviation Authorities or their equivalents. And 20 other varied delegations.