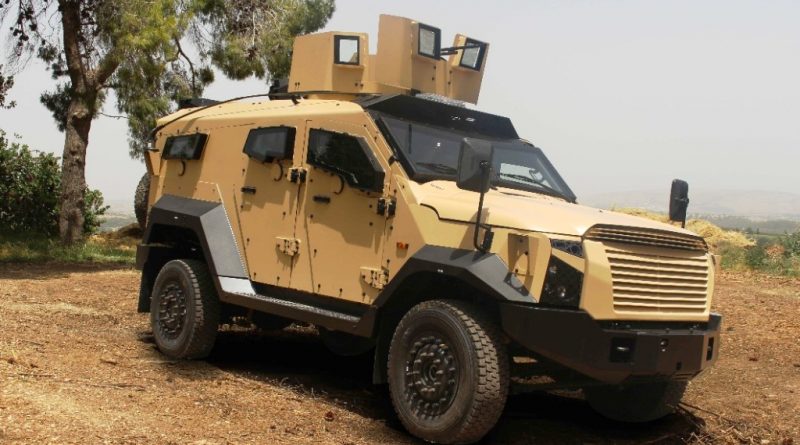 Israeli Plasan, a benchmark in the armour business and a vehicles producer, could not miss Expodefensa, Colombia being among its customers, Army and Police deploying overall 13 SandCat vehicles. Although the number is small, the door is open and now Plasan is promoting the latest version of its SandCat, the Stormer. The vehicles already in service are of the TPV (Tactical Protector Vehicle) model on which the Stormer has a number of new advanced features improving performances. First of all the wheelbase is much longer, 3,429 mm versus 2,946 mm of the TPV; this means that the drive shaft works at a better angle, reducing maintenance and improving reliability. 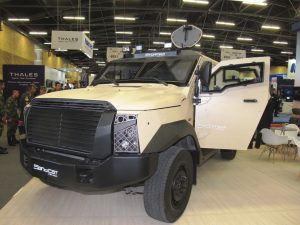 Rear suspensions used to be with coil springs and arm, the new vehicle having leaf-spring suspensions, also more rugged thus more reliable, while traction and comfort remain the same in cross-country according to company technicians. To immediately recognise the Stormer it is sufficient to look at the windscreen: this is now split in two, reducing crack problems and lowering the cost of replacement in case of damages. The chassis remains that of the Ford F-550 fitted with a V-8 300 hp engine that provides a 34 hp/t, GVW being 8,845 kg. Curb weight varies depending on protection, 6 t at the lowest and 6.7 at the heaviest, payload thus shifting from 1.85 t to 1.15 t. The 7.7 m3 cabin protection is Level 2+ according to STANAG 4569, standard floor protection being 2a/1b; a kit however allows to increase it at 2a/2b.

The Stormer leverages all recent breakthrough in armour technology, providing a protection similar to the previous vehicles while reducing the armour weight. The Stormer can host up to 11 people, all in individual seats, a considerable progress over the TPV that could carry 8 people, those in the back on benches; not only this increases comfort, but more important the adoption of energy absorbing seats allows to considerably improve safety. Maximum speed is purposely limited to 125 km/h, the Plasan vehicle being able to climb 60% ramps and to drive on 39% side slope. The Stormer can be transported inside a C-130 aircraft, the Colombian Aviation being equipped with such model. 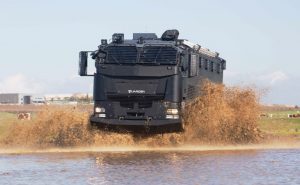 With its SandCat Stormer Plasan looks at light multi-mission units that should be formed in the Colombian military, the vehicle being a modular platform that exploits the considerable military knowledge of the company. Beside the Stormer Plasan is also promoting its Guarder law enforcement vehicle, which can carry up to 24 police officers.