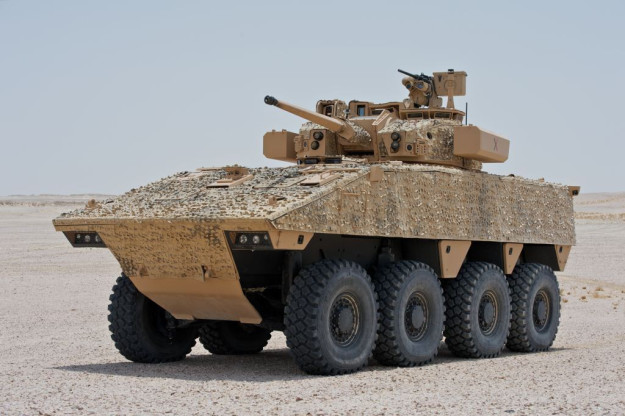 During French President Macron visit to Qatar a letter of intent was signed for the potential procurement of the VBCI (Véhicule Blindé d’Infanterie) wheeled armoured fighting vehicle by the Emirate Army. Such decision has been awaited for some time, the signature of the LoI leaving the Nexter 8×8 vehicle, which has seen action in Afghanistan and Mali with the French Army, the only candidate for the contract, that should be finalised in 2018, Qatar then becoming the first export customer of the VBCI. Some 300-400 vehicles are to be acquired according to rumours circulated in the past, however new information seem to raise the number at slightly less than 500. No details about possible workshare as well as on offsets were provided.

It is unclear which version Qatar will adopt, however considering the hot climate where the vehicle will operate it is safe to guess that the Qatari vehicles will be of the latest version, also dubbed VBCI 2. This is powered by a 600 hp diesel engine versus the 550 hp of the original version, and has a 19 t curb weight and a 13 t payload, for a GVW of 32 t, 4 t more than the vehicle in service with the French Army. No indication were given on the type of turret and armament for the combat version, as well as on the number and types of versions that will eventually be ordered; the vehicle was demonstrated in Qatar fitted with the new T40 turret. In France the work for these vehicles will be carried out at the Roanne plant, north-west of Lyon, that factory having celebrated its 100 year of existence a few days before the announcement.