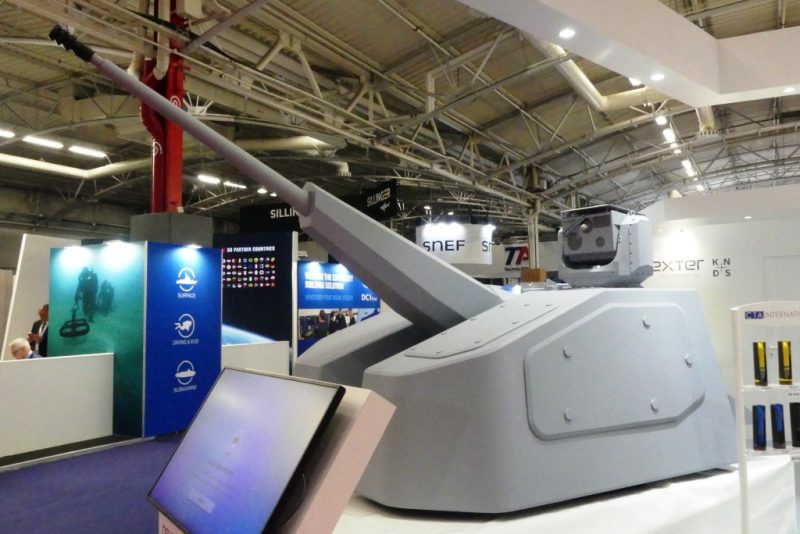 The 40 CTAS (40 mm Cased Telescoped Armament System) developed by CTA International, the JV between BAE Systems and Nexter, is under series production and is now in service in the French Army, and soon in the Belgian Army, installed in the T40 two-man turret fitted onto the Jaguar 6×6 reconnaissance armoured vehicle. The same 40 CT cannon has been delivered to the UK MoD for the British Army Ajax tracked vehicle.

In the early 2010s Nexter and Thales, with CTAI, exhibited an air defence turret including the same cannon, for both ground and naval applications, which was known as RAPIDFire. It was developed by an industrial team formed by the three aforementioned companies, responsible respectively for the turret, the sensors, fire control system and integration, and for the cannon and ammunition.

At Euronaval 2022 one of the first three pre-series RAPIDFire turrets in the naval version will be exhibited; the system is now fully developed and ready to enter full scale production. Its core remains the 40 CT cannon. As a recap, this employs a peculiar ammunition design, in which the projectile is embedded in the tubular case, hence the “cased telescoped” name of the weapon. This round allows the adoption of a side-loading system that permits to shift from one type of ammunition to another while having a link-less single feed system. The loading/expulsion cycle is based on a rotating chamber, the round being fed at 90° from the barrel; the chamber rotates aligning the munition with the barrel, the round is fired, the chamber rotates again and the next round ensures the expulsion of the spent case, shortening the firing cycle, reducing jamming risks, and avoiding the need of linked ammunition.

This mechanism is common to the cannon currently in use on land vehicles as well as on that installed on the RAPIDFire turret. The Naval version has been designed considering the maritime environment plus specific naval safety requirements. In order to address air targets, a specific anti aerial airburst round (A3B) is under development.

In the land version the 40 CTAS installed on the Jaguar can fire any type of available ammunition, which include: Two high explosive rounds, the General Purpose Round Point Detonation Tracer (GPR-PD-T) and the General Purpose Round Air Burst Tracer (GPR-AB-T), a kinetic energy antitank Armour Piercing Fin Stabilised Discarding Sabot (APFSDS) round, and a Training Practice Tracer (TP-T) round available also in the reduced range (TPRR-T) version. According to available data the GPR-PD-T can defeat a 210 mm thick concrete wall at 1,000 meters, the GPR-AB-T can spread splinters on a 125 m2 surface on the ground, while the APFSDS round can penetrate 140 mm of rolled-homogeneous armour at 1.5 km. Finally the A3B (Anti-Aerial Air Burst) as it is known in France, while internationally it is named KEAB (Kinetic Energy Air Burst is currently under development.

Coming to RAPIDFire, the gun will mainly use the latter round that is optimised for air defence; it will have the same programmable fuse used on the GPR-AB-T round, and will release a payload of 660 grams of tungsten pellets that will form a cloud of sub-projectiles in front of the target. The shape of those pellets was specifically designed to cause maximum damage to air targets considered for RAPIDFire, such as helicopters, missiles, etc, as well as against drones, which are becoming one of the most dangerous assets especially when operating in swarms. According to available information the new round will be able to engage those targets up to 4,000 meters. EDR On-Line understood that eight rounds are considered sufficient to defeat a target, the best option being firing a 4-round burst at 4,000 meters, waiting to fire a second one a few seconds later after damage assessment, when the target has closed distance to possibly 2,500 meters. For increasing accuracy an 80 round/minute rate of fire is considered the best, rather than the maximum one which is 200 rounds/minute.

Being a full bore calibre round, with a muzzle velocity lower than the APFSDS, the A3B/KEAB has a wear factor similar to that of GPR munitions or even lower. It is however 5% heavier,  therefore to maintain a comparable impulse during firing the weight of the cannon has been increased, the moving mass stepping up from around 340 to 360 kg. This increase was obtained adopting a heavy duty barrel and adding a corresponding ballast at the back of the gun to maintain the balance on the trunnions. The increased thickness of the barrel does not pose any problem in production, as the dimensions of the original steel block from which the land version of the gun is manufactured is well sufficient also for producing the heavy duty one. A new muzzle brake is installed, with three baffles, compared to the two of the Jaguar cannon, the latter being however qualified for firing also the A3B/KEAB.

As said, being exposed to the effects of saline water all components of the naval cannon have been submitted to peculiar surface treatments in order to ensure adequate protection.

Coming to the RapidFire turret, it has flat and slightly inclined sides, and is installed over a mount that allows avoiding any intrusion in the ship deck. The overall elevation arc is 85°, maximum elevation depending on the depression required by the customer. The air defence variant has a weight of 3.5 tonnes with ammunition, compared to the 4.5 to 6 tonnes of the T40 installed on the Jaguar. The standard U-shape ammunition magazine located under the weapon contains 140 rounds, over the double of the 64 ready to fire ammunition available in the Jaguar T40; however in the latter it is possible to reload under armour, which is not the case in the naval/air defence variant. The RAPIDFire industrial team also offers a 70-round magazine as an option. The RAPIDFire can address surface-to-surface as well surface to air targets. A higher number of gyros are installed to ensure accurate data to the stabilisation system. To test the latter, Nexter acquired a hexapod that was used to simulate the ship behaviour in rough seas. According to industry sources servo motors used on the air defence version have a comparable power with those of the much heavier land turret, and provide considerably higher angular speed and acceleration. Finally, to cope with naval fire prevention regulations all cabling had to be modified, the norms being pretty different from those imposed for land applications. The RAPIDFire weight allows it to be installed on ships beyond 30 meters long.

Coming to the fire control system, here is where Thales comes into play thanks to its experience in surface-to-air FCS. The dedicated gyro-stabilized optronic sight, installed on the left side of the gun, offers a high accuracy of firing. It is wholly new, and includes infrared and daylight channels and a laser range finder. The latter is of the pulse type with high rate, a key factor in air defence use according to industry, as it allows around 10 measurements per second with very high accuracy well over 10 km distance. The cooled thermal camera operates in the medium wave IR spectrum and is fully digital, no more details being available. Through the optronic sight the operator, which RAPIDFire console is usually located in the ship combat operations centre, can identify the target prior the engagement, track it, adjust if needed the shooting automatically proposed by the system, select the right burst and ammunition, and assess the result of the engagement. As said, most of the ammunition load will be made of A3B/KEAB rounds optimised against air threats, however other ammunition including GPRs can also be loaded, especially when the RAPIDFire is used as a close-in defence system against small and fast surface vessels. The optronic system case is designed with growth potential in mind, one of the possible additions being that of a laser emitter for guiding laser beam-riding ammunition. To further increase its all weather capacity the RAPIDFire turret was designed to accept a tracking radar, allowing it to operate in fully autonomous mode. This should be installed at the centre on top of the turret.

The RAPIDFire can obviously be integrated into the ship combat system, exploiting existing on-board radars as well as COC consoles, to which the relevant software would be added. A dedicated console can also be installed, which is the solution chosen by the French Marine Nationale, EDR On-Line understood, in order to be able to operate it also autonomously, for example in passive surveillance mode using optronics. Models of the turret with a radar were seen on the scale model of the future French aircraft carrier. The French Navy considers that in missions such as those in coastal waters or when the ship is at anchor, an autonomous passive mode is to be preferred to the fully integrated one using an active sensor, as in some scenarios it is preferable not switching on the radar for security or safety measures.

The turret exhibited at Euronaval is fully operational, and following the exhibition the first pre-production Naval RAPIDFire will be installed on the Jacques Chevallier, the first French Navy BRF (Bâtiment Ravitailleur de Forces) replenishment vessel and will start acceptance trials at sea. The same turret will be installed on the remaining three BRFs to be delivered within 2029, but the industrial team aims providing the RAPIDFire also for future ocean patrol vessels (PO, for Patrouilleur Océanique), as well as for mine warfare vessels. As for the export market, multi-role patrol corvettes to be build within a European programme are also being considered. EDR On-Line understood that the same turret exhibited at Euronaval will be proposed for ground-based air defence applications as Ground RAPIDFire, with only minor modification, one of them being clearly the adoption of different algorithms for stabilisation. 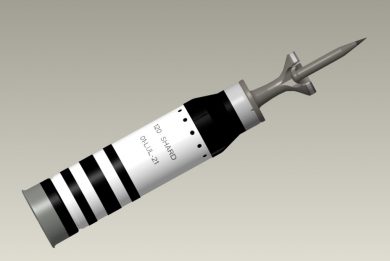