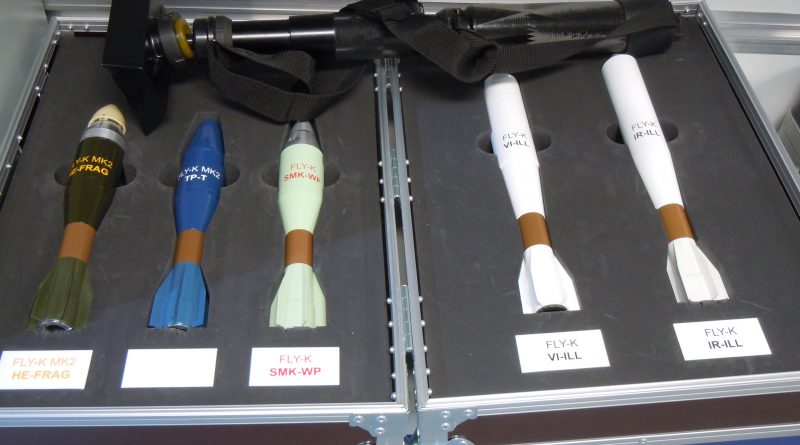 At Eurosatory, RUAG Ammotec showcased the second generation of the FLY-K MK2 Stealth Weapon System. Developed to meet the latest French Army requirements, the new system includes an improved Individual Grenade Launcher (IGL) which features a new digital range indicator mounted on top, and a new lighter base plate. The 4.83 kg IGL is specially designed for close combat range providing extended firepower. The combination of its ease of use, a wide range of grenades and less lethal product available such as a grapnel and staircase at 30 metres in height, make it an effective and flexible system.

The FLY-K MK2 ILG can be carried safely loaded with a grenade, has no possibility of double ignition, and can be safely fired from sandy or rocky areas. Unlimited firing is possible as there is no overheating of the launcher.

The wide range of FLY-K grenades includes the HE-FRAG MK2 with a range of 900 metres, SMK-WP smoke grenade, the VI-ILL that provides visual illumination that has a 25 second burning time, the IR-ILL that provides infrared illumination, and the TP-T for target practice with a smoke tracer to mark impact and firing precision.

With armed forces increasingly deployed in out-areas and night operations where troops are exposed to numerous threats, keeping a low spectrum firing signature is vital. The FLY-MK2 has been designed and developed by Cathyor Engineering SA in Switzerland to give the troops an advantage of being able to engage the enemy without betraying its location. During night operations, the IR-ILL grenades are not detectable when firing, and display on its trajectory provides an important tactical advantage.