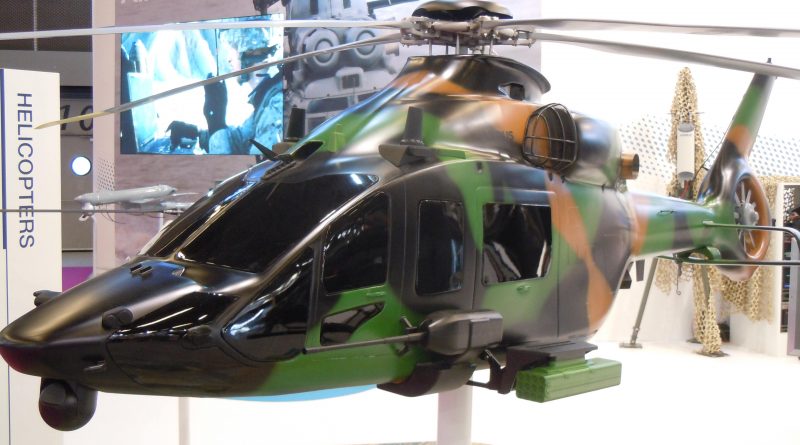 Dominating he Airbus Helicopter stand at Eurosatory was a model of the H160M multi-role helicopter that has been selected for the French Light Joint-Sevice Helicopter (HIL) programme.

The 6-ton H160M will replace the Armée de Terre’s fleets of AS555 Fennecs and SA342 Gazelles in the armed scout role, equipped with undernose EO/IR sensor turret and armed with a 20mm cannon and Thales FZ275 laser-guided rockets mounted on stub wings, and 7.62mm door guns. They will also be equipped for fast roping.

The Armée l’Air’s Fennecs and SA330 Pumas will be replaced by the H160M in the ISR, close support, CSAR and anti-helicopter/UAV roles, some of which will be armed with cannon and door guns.  All will be inflight refuellable from C-130J and A400M tanker aircraft.

In Aéronavale service the H160M will replace the AS365 Dauphins, AS565 Panthers and the recently retired SA314 Alouette IIIs.

For the naval SAR and sea surveillance roles the H160M will equipped with a maritime radar, armed with ANL next-generation light anti-surface missiles, and sonar and homing torpedoes for the Anti-Submarine Warfare (ASW) and Anti-Surface Warfare (ASuW) roles. They will also work with UAVs such as the Airbus VSR700 in manned-unmanned (MUM) operations. They will all have folding rotor blades and tail fin, and deck-landing harpoon.

Although there is an initial requirement for 169 H160M helicopters in the three variants of the HIL programme, no contract has yet been signed for their production.