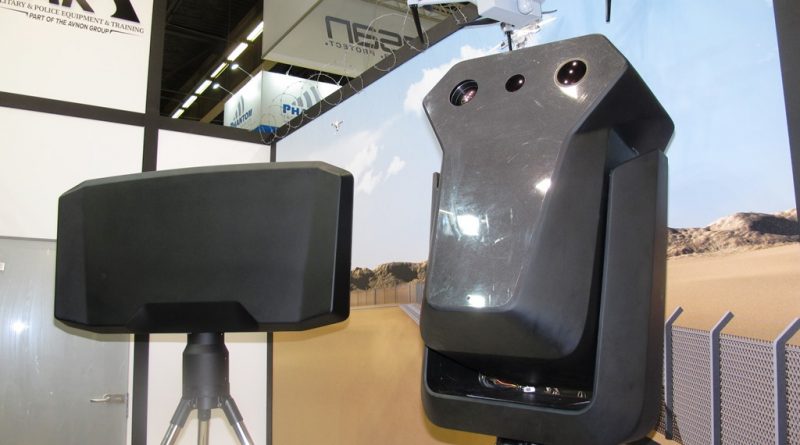 SkyLock, an Israelian company part of the Avnon Group, unveiled its SkyLock 3 system that offers one hardware element comprising three separate systems. The system is thus made of only two components, a radar and the three-in-one element. The outer layer of protection is provided by the radar, which can detect aircraft up to 20 km, medium size drones at 10 km, and small drones between 300 meters and 3.5 km. Depending on the geographic area to which the system is aimed, the band might differ based on weather considerations: should the radar be used in Asia, where heavy rain tends to attenuate the signal, it would be provided in C-S band, while in other continents it would operate in X-band. With a refresh frequency of 30 Hz, it can deal with 200 targets simultaneously; it covers 360° in azimuth and 60° in elevation, accuracy being respectively 0.3° and 1°, which means 50 meters at 3 km.

Once the radar has detected a potential threat it passes the data to the new Advanced Anti-Drone Strategic System, as the company defines it. This includes an optronic module, capable to recognise and identify a drone up to 2.5 km and two active systems aimed at dealing with the threat in softkill or hardkill modes. The former comes as an RF jammer, which output power allows operating up to 15 km, five times the standard jammers range. It can operate in the radio-control frequencies as well as in the video-link ones, giving the operator the choice on the type of action to be taken, i.e. make the drone land immediately or disturbing the images link to allow it to go back to the drone operator’s location in order to acquire its grids. As for hardkill, the system is fitted with a laser burner capable to cut into pieces a small UAV up to 800 meters distance. The SkyLock 3 is proposed for protecting infrastructures of various types, from airports to military bases downrange, a typical airport defence system consisting of one radar and six anti-drone units.

Skylock has already sold numerous C-UAS units to undisclosed customers in 2017-18, however these were all made of separate modules. One customer acquired nine containerised units for border control, while the Presidential Guard of the second customer acquired three systems for compound defence and three for defending the national Parliament, one mobile system installed on a C-130 transportable van also being acquired. The all-in-one solution unveiled at Eurosatory is already in production, customers in Israel and Europe having already ordered two-digit quantities, two more having been recently acquired in Latin America to be used in prisons.