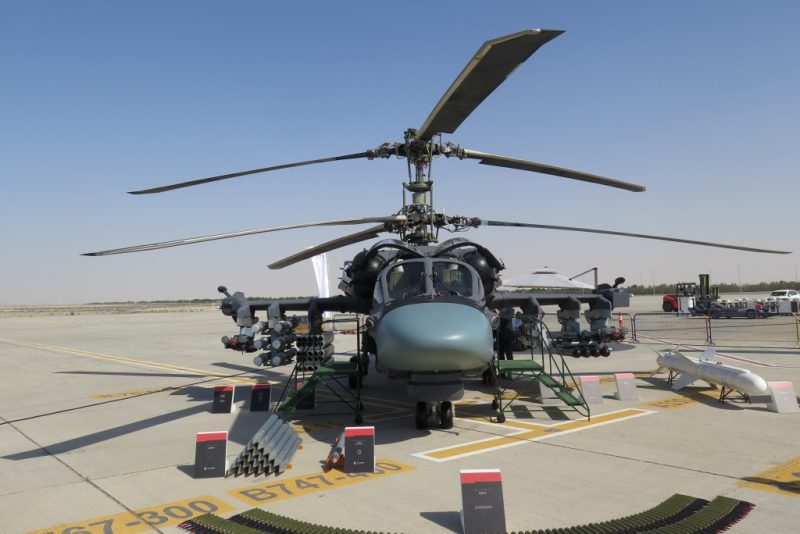 Among the numerous aircraft exhibited, at the static display as well as in flight, by the Russian industry at the Dubai Airshow, a première at this event is the presence of the Ka-52 “Alligator” reconnaissance and attack helicopter, in its export version. Together with the Mi-28NE “Night Hunter”, at its first appearance at an international show, the Alligator performs daily at the flight display performing elements of complex aerobatics used in real air combat maneuvers.

The two-seat derivative of the Ka-50, it maintains 85% commonality with the single-seat attack helicopter. Sixteen meters long, with two 14.5 meters diameter counter-rotating rotors, and a height of 4.9 meters, it has a maximum take-off weight of 10,800 kg. Powered by two VK-2500 turboshaft each providing 2,400 hp, it has an operational ceiling of 5,500 meters while the hovering ceiling in ground effect is 4,000 meters. Maximum rate of climb at sea level is 16 m/s, while vertical rate of climb is 12 m/s. It can reach a maximum speed of 300 km/h, cruising speed being 260 km/h which gives a practical range on internal fuel tanks of 460 km. The two-crew members are located at the front, side by side, and are seated on K-37-800M energy absorbing and ejection seats.

Coming to weapons, the 2A42 30 mm cannon is located on the right side of the fuselage, stub wings being able to carry a considerable amount of weaponry, including 9K121 Vikhr-1 or 9M120 Ataka anti-tank missiles, Igla-S air-to-air missiles, and S-8 (80 mm) or S-13 (130 mm) rocket pods. The GOES-451 sighting system, with laser designator, and the FH01E radar are located at the front. The Alligator is fitted with signature control devices as well as electronic and active counter-measures.

A multi-mission aircraft, the Ka-52 was designed to destroy enemy armoured vehicles, but can obviously be employed for a much wider range of operations, such as close air support for troops on the ground, air combat patrol, convoy escort, and so on. The presence of the Ka-52 Alligator in Dubai, as well as that of the other heavily armed Russian helicopter, shows how much Moscow and the Russian industry look at the Middle East as a potential market for their most advanced rotary wing aircraft. 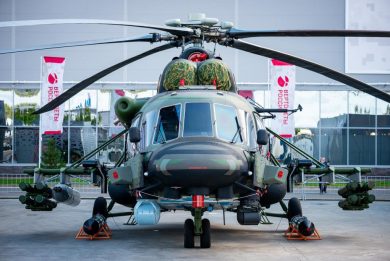 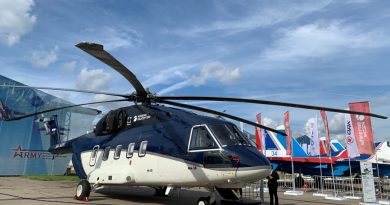