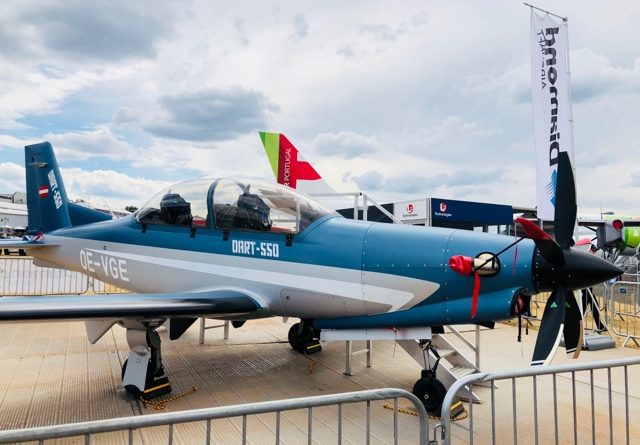 The Diamond Aircraft Group was attending Farnborough for the first time since its was acquired by China’s Wanfeng Aviation at the beginning of the year and just two months after its maiden flight, Diamond Aircraft’s new variant of its Diamond Aircraft Reconnaissance Trainer (DART) series tandem-seat turboprop aerobatic trainer, the DART-550 made its public debut at the air show.

The GE-powered DART-550 is and option to the Ivchenko-Progress/Motor Sich AI-450S turboprop-powered DART-450 that was first introduced to the public at the 2016 Farnborough Air Show.

Also on display was the DA62 MPP special mission aircraft the first of which has been delivered to DEA Specialised Airborne Operations based at Gamston Airport, a UK provider of airborne sensing solutions including ISR, Aerial Survey and Flight Calibration with a fleet of Diamond DA42 MPP aircraft.

While Diamond Aircraft offers a complete line-up of type-specific flight training simulators, the Belgium company Euramec exhibited its Diamond DA42NG flight training device (FTD) at Farnborough which it has sold to a Belgian flight school and in partnership with the Chinese company Wright Brothers, to the Civil Aviation Flight University of China.