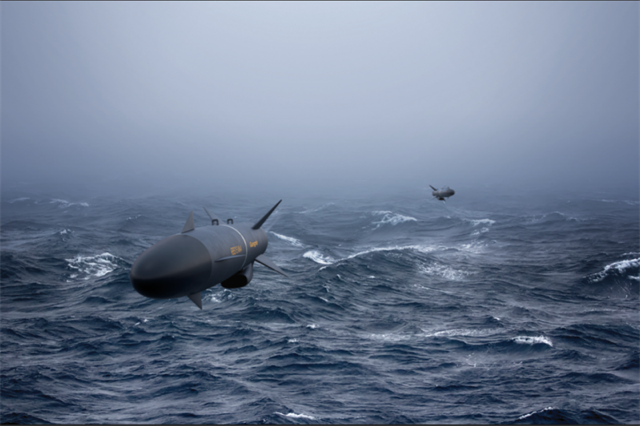 Saab Dynamics unveiled the next-generation evolution of its RBS15 family of anti-ship missile systems at Farnborough the RBS15 Mk4 Gungnir. The new system continues the tradition of robust and autonomous all-weather capability of the RBS15 missile family but utilising a design that unlocks a new level of future growth potential. “RBS15 Gungnir is offered in both air-launched and surface-launched configurations that offer greatly improved capabilities, compared to other missile systems on the market. With an improved range to more than 300 km and highly advanced target seeker, it gives the capability to engage any target, in all conditions,” says Görgen Johansson, Senior Vice President and head of Saab business area Dynamics.

The RBS15 missile family is jointly produced by Saab and Diehl Defence GmbH & Co. KG and serves with various navies, coastal batteries and air forces from Sweden, Finland, Germany, Poland, Croatia, Thailand and an undisclosed country. The name Gungnir refers to the Norse god Odin’s spear which never missed its target. RBS15 Gungnir is the system level name while in the air-launched configuration the missile is called the RBS15 Mk4 Air.

The option to engage targets from the air, as well as from land and sea gives the ability to perform coordinated attacks, with multiple missiles, against a wide range of naval and land-based targets thereby increasing mission flexibility and success. The next generation version of the RBS15 development and production programme was first contracted in March 2017 with the Swedish Defence Material Administration (FMV) with deliveries to take place during the period 2017-2026 for both the Royal Swedish Navy’s Visby-class corvettes and Royal Swedish Air Force JAS Gripen E multi-role fighters.