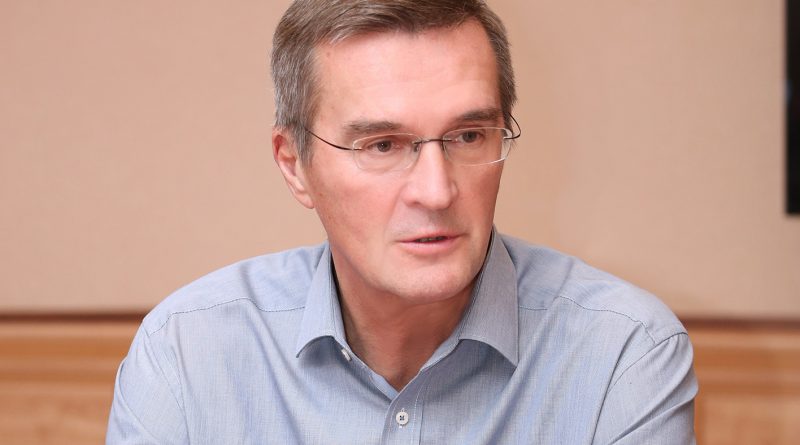 The revenues of Russia`s Tactical Missiles Corporation (Russian acronym: KTRV) for 2017 will reach RUB 210 to 215 billion (USD 3.68 to 3.77 billion), Director General of KTRV Boris Obnosov said in an interview with the TASS news agency.

“The company`s consolidated 2016 revenues were nearly RUB173 billion [USD3.03 billion], while in 2017 they reached RUB210-215 billion [USD3.68-3.77 billion]. In other words, 2017 revenues exceeded those of the previous year by nearly 30%. We are planning to get 2017 net profit of RUB20 billion [USD350 billion],” Obnosov said answering a question about the results of the Corporation`s manufacturing activities. “We have showed strong performance, I think. Regarding the fact that we have nearly 51,000 employees, the Corporation`s annual output per person has almost reached RUB4 million (USD70,175). This result is among the best in Russia. The Stockholm International Peace Research Institute has ranked KTRV 35th in the current rating of the biggest world`s defense enterprises, and we have more place to grow,” Obnosov added.

The KTRV`s head office based in Korolyov near Moscow is among the biggest manufacturing facilities of the Corporation. “We have a unique head office: it is both managing and manufacturing place. It has shown good performance also: the office`s 2017 revenues have reached RUB30-35 billion [USD520-610 billion]. In general, all the enterprises of the Corporation have accomplished their serial and export orders. I would distinguish the Military-Industrial Corporation (MIC) NPO Mashinostroyenia, the Vympel Design Bureau and the Raduga Design Bureau,” Obnosov said.

The Corporation`s 2017 export revenues have reached nearly USD1 billion. “The export component is necessary for every enterprise as it allows getting of a higher profitability. We have been granted with rights to conduct after-sales support and to deliver spare parts. Moreover, the BrahMos Aerospace Russian-Indian joint venture [JV] is working. Therefore, we have export [sales] of nearly USD1 billion, or, to be more precise, USD960-963 million. We are expecting that these numbers will increase this year, and a significant growth of export revenues in long-term prospective will take place also. KTRV has robust portfolios of naval underwater weapons, coastal defense systems and ship-based weapons. As a result, our market positions will be shored up as we will promote not only air-launched weapons but also other types of missiles,” Obnosov said answering a question about the Corporation`s activities on the global arms market.

Several weapons developed by KTRV remain unmatched, in particular, the Kh-101 air-launched cruise missile (ALCM). “I would point out that the Kh-101 is among the best items of hardware developed by Russian designers. It is a very sophisticated system, and it is still unmatched by Western analogues in terms of range and accuracy. However, a missile cannot work outside a system that incorporates a carrier, the preparation of a flight mission, a pilot, a navigator, engineers on the ground, etc.,” Obnosov emphasized describing the newest designs of the Corporation that have been put into serial production in recent years.

According to the head of KTRV, the experience of the use of Russian air-launched weapons during the counter-terrorism operation in Syria has allowed enhancing of their performance. “Our representatives were in Syria; they also were [at the places] in Russia where the missiles were prepared for launch. For a long period of time, the specialists were finishing the items of hardware, working on error finding and prevention. I think that both hard work during last two years and the exerted efforts have been measured up to the full extent,” the head of KTRV said answering a question about the use of air-launched weapons (ALW) in the Syrian theater of operations. He added that a wide range of ALWs, including missiles and guided bombs, had been used during the operation in Syria. 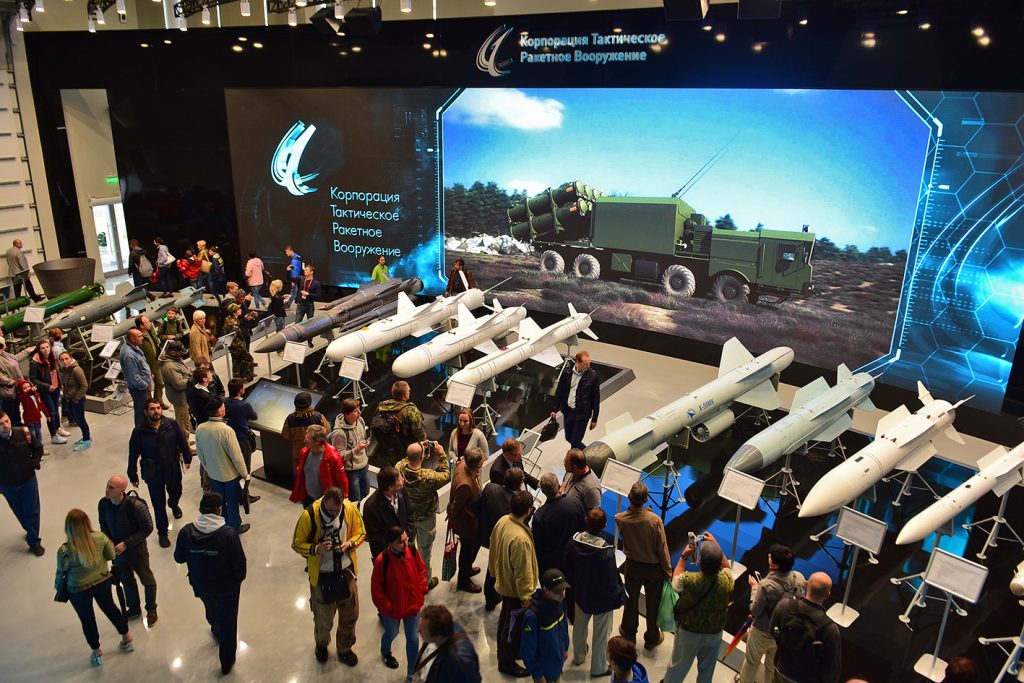 The Corporation is developing armaments for the newest 5th-generation Su-57 fighter jet. “The work is being carried out in an active manner. All the pieces of the armament suite for this aircraft, both those stored in its internal weapon bay and those attached to external hardpoints, are being developed by the enterprises of the Corporation. We have switched to practical flights, and we will see results at an early date, I think. The data exchange protocols have been interfaced with almost all types of the weapons. The main works, particularly, launches, are not far off. This is the case of the items by Raduga, Vympel and the head office in Korolyov,” Obnosov said answering a question about the implementation of the program of the development of the ALWs for the 5th-generation fighter jet.

Describing the current state of the manufacturing facilities, the head of the Corporation emphasized that KTRV pays specific attention to the development of faltering enterprises. “We have several issues, in particular, those related to the Krasniy Gidrpopress plant in Taganrog and the Dagdizel plant in Kaspiysk. However, significant measures to improve the situation have been conducted at both enterprises. A new workshop has been built at Dagdizel in 18 months. The plant uses new machine tools and buildings, and it has received orders. A number of research-and-development works are to be accomplished, and new orders for serial manufacturing are to be received. [These measures] will result in the prosperity of the enterprise. We have also replaced the executives of Krasniy Gidropress, and the situation with orders at the plant is good enough. There is a pivotal issue, how to organize the working process and to set the employees for work,” Obnosov added.

The head of KTRV praised the BRAHMOS-A air-launched cruise missile (ALCM) developed by the BrahMos Aerospace JV established by the MIC NPO Mashinostroyenia based in Reutov near Moscow and India`s Defence Research and Development Organisation (DRDO). “The Indian side has organized the test launch with flying colors. It is needless to say that our engineers and designers participated in it. The test range, target objects and telemetry that allowed controlling of the launch in real-time mode were functioning well. The congratulations sent by the Indian side were pleasant. A large amount of work has been done as the missile, originally intended for ships and ground-based systems, has been integrated into a fighter jet, the performance of which is distinctly different from that of a bomber. The BRAHMOS-A item has shown good performance. The use of a single type of missile in air-, ground- and sea-based systems drastically reduces the costs related to after-sales support and maintenance. We have a similar item, namely the Kh-35Eh anti-ship missile; however, it is of a different type. Now a supersonic heavy missile has been geared to air, ground and sea applications. The BRAHMOS-A missile has high export potential and large internal orders. I do not rule out that the Russian military will pay attention to this missile as it can be integrated into the Su-34 and Su-35 aircraft,” Obnosov said. “I think that the Russian-Indian BrahMos Aerospace JV is unmatched in terms of effectiveness,” he added.

The head of KTRV emphasized that the Corporation has no fear of non-license copying of its production. “Works to modernize hardware must be carried out continuously. If you stop doing it, you get in hot water in a heartbeat. The development of new items that can spark the interest of potential customers is required,” he said answering a question about the strategy of the company`s scientific-and-technological activities against the background of increased international competition.

Obnosov mentioned the readiness of KTRV to transfer technologies to potential customers upon the existence of such an interest. “The establishing of joint ventures on the pattern of the BrahMos Aerospace company is likely, this is a good way to enhance cooperation with our partners. I do not rule out that such kind of cooperation may be put into practice in the Near East. Previously, this region had been dominated by the United States for 20 years, but now we are revitalizing our presence on this market. [We] should be sensible of the interest of our potential customers,” the head of KTRV said.

Speaking on imported items substitution, Obnosov said that this issue should be solved reasonably. “There is no much point in the replacement of separate small microchips as not only Western European, but also South-East Asian countries offer their solutions on the market. When it comes to critical components, we have got rid of the dependency from, particularly, Ukraine. New items made by the Corporation feature indigenous seekers and powerpacks with enhanced performance. We previously cooperated with the Kiev-based Arsenal plant that was manufacturing seekers for short-range air-to-air missiles. At present, our Azov optical-mechanical plant [AOMZ] is conducting works in the area of thermal imaging seekers. We have closed the gap and come forward in several areas. Our new items, for instance, air-to-air missiles and guided bombs are fitted with Russian-made seekers. Therefore, we have mastered the indigenous manufacturing of critical components,” Obnosov emphasized.

Regarding the areas of further development of missile weaponry, the head of KTRV emphasized that the main task is to increase the range, accuracy, speed and jamming resistance of items. “The tendency to enhance these specifications and to develop innovative things will always take place,” Obnosov concluded.