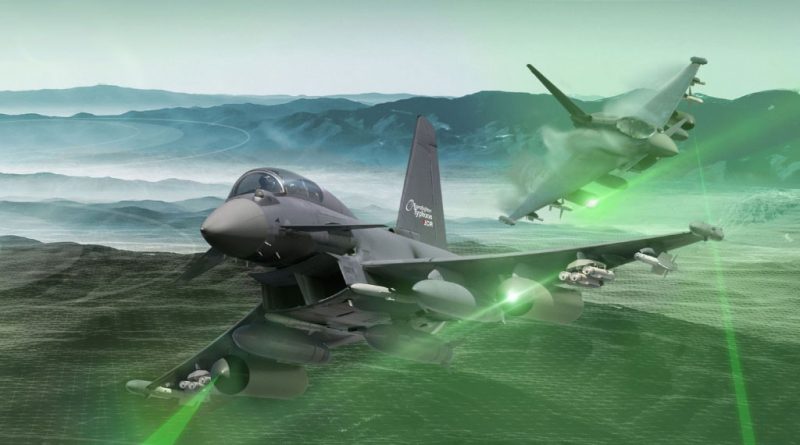 In a more and more contested environment, potential opponents are fielding increasing effective defences based on higher levels of connectivity which makes it difficult to understand who launched and who is guiding a SAM, penetrating air defences is becoming an increasingly difficult task. As the threat is being continuously updated, the platform EW system must also be updated rapidly, mission critical data being loaded during the turn around in order to launch the aircraft for the next mission with a fully updated data package.

That said, that of overcoming the A2/AD issue is something well in the mind of the German Armed Forces, and more particularly in that of the German Air Force. The concept was issued in 2018, the service having not much focused on the ability to engage in all hostile future environments, including Anti Access/Area Denial scenarios, as asymmetric situations dominated the recent past. Germany has now decided that it wants to dominate the Electro-Magnetic (EM) spectrum, and has adopted a strong determination and commitment, being willing to contribute to the NATO effort in this field, Brigadier General Christian Leitges, DCOS Plans and Policy and the German Air Force HQ explained during the International Fighter Conference organised by Defence iQ in Berlin in mid-November.

The German Air Force programme is known with the acronym LUWES (Luftgestätze Wirkung im Elektromagnetischen Spektrum), that is airborne action in the electromagnetic spectrum and includes three main elements, a Stand-Off Jamming attack platform, an Escort Jamming platform, and Stand-In jamming system in the form of an unmanned Airborne Launched Decoy (ALD). The expendable unmanned systems will be used when a high attrition rate is expected, that is in the no-escape zone, manned fighters in EA version operating in the enemy defended airspace, thus within lethal range of opponent’s weapons, escorting manned attack aircraft, while stand-off systems will remain away from risks, outside the confined space. The LUWES is designed in order to deal with the threat expected in 2030, the linear front becoming now a bubble with an increasing density, integrating many air defence assets not only in the classic domain.

The solution adopted for the Stand-Off capability will very much depend on technology and physics. According to Brig.Gen. Leitges, should a podded system provide the required energy needed for ensuring the right range, this should obviously be an option. If this will not be the case, a bigger aircraft would be needed; the only major platform in service with the Luftwaffe is the A400M, which is not considered suitable for this role, a modified business jet being the most probable solution.

As for the Escort Jamming mission, this will inevitably fall upon a fighter, which will also be the one to carry the ALD. And here the Eurofighter comes into play.

Currently the Luftwaffe is about to receive its last Eurofighter, while the first Tranche 1 aircraft are being put out of service due to obsolescence. The Air Force looks forward to a further order to replace the retiring aircraft, these being equipped from inception with the new Captor-E AESA radar, the first aircraft fitted with the new sensor being expected to enter service in 2024, bridging the service towards the Future Combat Air System which is expected in 2040. EDR On-Line understood that the Luftwaffe is looking for around 10 Stand-Off Jamming platforms and 12, that is a squadron, of Escort Jamming aircraft, the Luftwaffe officer underlining that the service considers separate missions ECR and Electronic Attack.

During the International Fighter Conference Raffael Klaschka, Head of Strategic Marketing at Eurofighter, announced the future ECR version of that aircraft, a two-seater version that is being developed by a team of companies including Hensoldt, MBDA, MTU, Premium Aerotec, Rolls Royce, BDLI, BDSV, and Airbus, the latter being the leading company of this programme.

In the company plans the Eurofighter ECR will be available in three different configurations: Electronic Attack (EA) with Stand-in Jammer, Electronic Attack (EA) with Anti-Radiation weapons, and Suppression of Enemy Air Defence/Destruction of Enemy Air Defence (SEAD/DEAD). The key element for the two EA configurations is the Escort Jammer, a pod under development by Hensoldt.

The centre of the pod is occupied by power generation elements, the ram air turbine power generator and the low voltage power supply, as well as by the cooling unit. Forward and aft and then come the ESM/ECM modules, including ultra-wideband digital ESM receivers, providing accurate targeting (DF)as well as accurate target identification, and finally come the Gallium Nitride (GaN) solid state AESA transmitters ensuring jamming functions. The Escort Jammer is capable to deal with multiple targets thanks to its digital radio frequency memory (DRFM), and is being designed to be compatible with other aircraft as well as with the future FCAS. The two Escort Jammers are fitted under the two wing pylons usually occupied by fuel tanks; on the ECR version the two underwing pylons forward and closer to the centreline will therefore be wet, the three extra fuel tank capability, including the centreline one, being maintained even when Escort Jammers will be fitted.

Another key effector in the Electronic Attack version is the Spear-EW. Announced in September 2019 and under development for the UK Royal Air Force, it leverages the work done by MBDA on the Spear family. Its core will be Leonardo’s advanced, miniaturised Digital Radio Frequency Memory (DRFM), which offers one of the most advanced and future-proof electronic jamming and deception currently available on the market. Turbojet powered, the Spear-EW will have an improved flight time of 37 minutes, during which it can loiter over targets while carrying out its jamming mission. The Eurofighter EA will be able to carry six such missiles under two pylons, thanks to the three-pack Spear launcher developed by MBDA.

As for sensors, the Eurofighter ECR in its three configurations will exploit all what is on board, including obviously all those passive part of the Escort Jammer, of the Defensive Aids Sub System (DASS), of the Emitter Locating System located in the wing tips, and of the radar, active sensors being those of the jammer, DASS and radar.

The core of the ECR version, and thus of the new rear mission cockpit which core will be the central multifunction panoramic touch display. The control of weapons will be made through a HOTAS (Hands-On-Throttle-And-Stick) command, the cockpit design ensuring an extensive visibility of escort jammer functions and electronic combat tasks. The new cockpit allows the pilot and the EW officer to operate in cooperation or independently, and should become the basis for the Eurofighter Long Term Evolution programme.

Until now the EJ200 jet engine has remained unchanged. Eurojet has already considered an upgraded version that should increase thrust by around 15%. Most of the engine components would be improved, the low-pressure compressor diameter being increased and having a higher number of revolutions, which should increase throughput by 10%, while the high pressure compressor will also contribute with a 5% increase provided by a speed increase and aerodynamic optimisation. The stator outlet temperature in the high pressure turbine will be increased and, together with some other modification, should allow a 5% improvement in performances, the low pressure turbine being also optimised. Fuel consumption will be reduced modifying and optimising the digital engine control & monitoring unit as well as the engine nozzle, the combustion chamber and the afterburner being also part of the upgrade programme.

While the briefing by the German Air Force seems to concentrate the service efforts to the Electronic Attack version armed with the ALD, the proposed ones being the aforementioned Spear EW, the new ECR version is proposed by the industry in two other configurations, one fitted with the two Escort Jammers but carrying two anti-radiation missiles in place of the six Spear EW, and the SEAD/DEAD version. The latter keeps the two anti-radiation missiles, which are carried in place of the fuel tanks, which are now replacing the EW pods, two three-pack pylons carrying six Spear 3 missiles, the stand-off SEAD/DEAD effector under development by MBDA. The Spear 3 is fitted with a dual-mode seeker is jammer resistant and has a stand-off range of 80 Nautical Miles. The final aim is to create a swarm of Spears of different types that will saturate opponents capabilities. All three configurations carry two short-range and four long-range air-to-air missiles, the Eurofighter ECR maintaining outstanding air-to-air capabilities. The company foresees a initial Escort Jamming capability starting from 2026, compatible with the Luftwaffe plans: 2019 saw the launch of the Escort Jammer Pod and of the Eurofighter ECR version, the coming years seeing the development of the stand-off technologies to be used in the pod, the prototype of the pod being then integrated into the Eurofighter to get to the initial capability, 2029 being the forecast date for the LTE version initial capability that will bridge the Luftwaffe towards the FCAS. 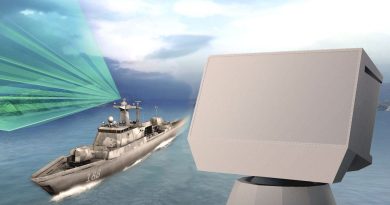 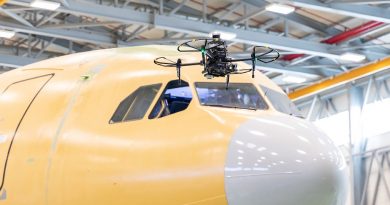