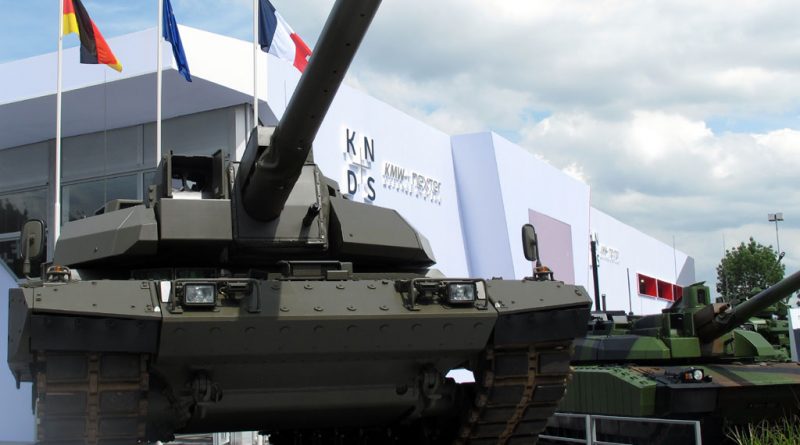 A hybrid tank can be one with a diesel-electric power pack, however it can be also one made of elements from two different MBTs: this was the case of the demonstrator exhibited at the entrance of the KNDS chalet at Eurosatory, made of a Lepard 2A7 chassis and a Leclerc turret, thus nicknaming it “Leo-clerc” became instinctive, so much that this definition has apparently already been used in the past. What was the aim when the work started over one year ago? Probably more than one. On one hand the law limits for the time being a close cooperation between the French and German souls of KNDS, the joint venture formed in 2015 by KMW and Nexter; putting together two existing elements allows however to avoid those limitations. This was also the way to verify the capacity of the two nations teams to work together on a common programme, the “human interface” being often more important than physical ones, such as that installed on the demonstrator to cope with the higher turret basket of the Leclerc turret compared to that of the Leopard 2.

In October 2017 EDR Magazine was told that possibly something on the future European tank, known with the acronym MGCS (Main Ground Combat System), might emerge in “mid-2018”, thus considering Eurosatory it was obvious hoping that this might become reality at the show. The same source, met in the exhibition aisles, told us that some more time would be required before releasing any information.

So, for the time being, let us look at our “Leo-clerc” as the first attempt to merge two nations tanks to obtain something that might go beyond the demonstrator stage. As KNDS officials told our magazine, coupling the Leopard 2 chassis with the turret of the French MBT allows considerable weight saving: we should not forget that the Leopard 2 has a tree-man turret while the Leclerc has only two crew members, an automatic loader being adopted. The 6 tonnes weight reduction gives a free payload in the order of 10% of the GVW, which is slightly more than 60 tonnes, compared to the over 67 tonnes of the Leopard 2A7. The demonstrator proved to be able to move and fire: following the assembly at Nexter’s Roanne plant it was tested in a southern France range. With over 8,000 tanks in the NATO/EU countries, some of them to be replaced, especially in former-Warsaw Pact countries, a tank able to cope with these nations streets and bridges might be of interest. KNDS considers that the demonstrator takes the best elements of both MBTs, and might be a solution for nations with limited financial resources, probably taking the elements from mothballed MBTs. Should any serious sales opportunity show up, according to KNDS the company would need three to five years to fully develop, produce and deliver the system.

Awaiting the future European Main Battle Tank, which is foreseen not earlier than 2030-35.