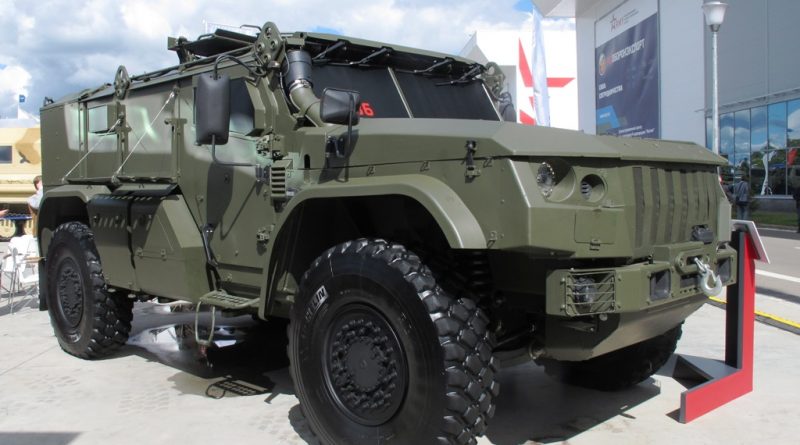 Syria has definitely become one of the main test grounds for the Russian military and defence industries. Among the equipment recently adopted by the Russian Army, the Middle East operational theatre saw in action Remdizel K-53949 Typhoon 4×4 armoured personnel carrier, which was of course also exhibited at Army 2018. Designed to counter ballistic and mine threats, some sources call for a Level III ballistic and Level IVa against mines, the basic version has a 14 tonnes curb weight and a 2 tonnes payload. It is powered by a 6 cylinder in line diesel engine providing 350 hp, can reach 105 km/h, it is fitted with independent suspensions, climb over 60% ramps, and is fitted with 14.00 R20 tires. The Typhoon is 6.76 meters long, 2.55 meters wide and 2.84 meters high, the vehicle on exhibition was not fitted with a weapon system, but a number of RCWS can be easily integrated.

Remdizel developed a lighter and shorter version devoted to airborne troops, known as K-4386 Typhoon-VDV; this is shorter, it is 6 meters long, and lower, 2.615 meters, and of course is lighter, with am 11 tonnes curb weight and a 2.5 tonnes payload. It maintains the same engine, thus top speed is higher, up to 130 km/h. The ground clearance is 420 mm, versus the 433 mm of the baseline version, however suspensions allow modifying the vehicle height from the ground according to terrain and mission. At the 2018 edition of Army the company unveiled a derivative of the K-4386 fitted with spring suspensions; this means that he vehicle is no more air droppable, but according to company sources this allows to lower the price and to increase reliability.

At the Remdizel stand we could also see a baseline Typhoon fitted with an antitank turret armed with Kornet-D weapon station armed with eight Kornet-EM missiles.