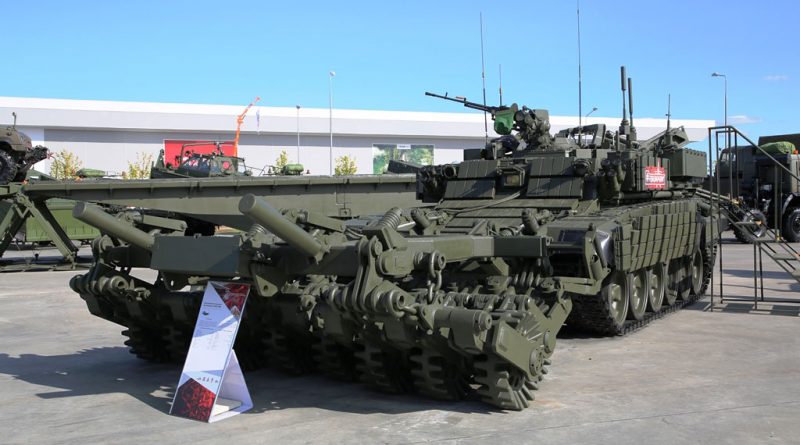 At Army 2018 new engineer systems where exhibited that are being introduced in service in the Russian Army. Traditionally the Russian Army engineers are equipped with top class systems, mobility and counter-mobility being key tactical capabilities of the service. The amount of engineer systems on show at the Patriot Expocentre is unimaginable, rows trucks carrying different types of boats and bridges and of mine-clearing systems being deployed on the external exhibition area.

The first newcomer, the BMR-3A, is a heavy obstacle-clearing vehicle based on the T-90A chassis, heavily protected by ERA tiles all along the sides. The chassis is fitted with a TMT-S mine roller system to which an electromagnetic countermine system is added, the overall system being thus able to detonate mechanically and magnetic fused mines. The overall mine roller width is 3.9 meters, mine-clearing speed being 15 km/h. The BMR-3A was exhibited in the Russian Army area, which should mean that the new mine-clearing system has entered service with the engineers corps. The BMR-3A weight, without rollers, is of 35.5 tonnes, 43 tonnes with the mineclearing kit, the crew being of two soldiers plus three sappers. It is armed with a 6P49 12.7 mm Cord heavy machine gun.

The second vehicle seen at Army 2018 was the UBIM, a multirole engineering vehicle. The base chassis can be either a T-72B3 or a T-90M, which is fitted with a dozer blade at the front and a crane boom on the right side of the vehicle. The latter can be fitted with different tools at its extremity. According to data provided at Army 2018, the UBIM is capable to advance under fire and in NBC contaminated areas clearing tree entanglements at 400-450 m/h or stone roadblocks at 350-400 m/h.

When preparing defensive positions, it can move 300-400 m3/h using its dozer blade or 100-120 m3/h with its excavating equipment. Its crane boom can lift a maximum load of 7.5 tonnes. Automatic self-diagnosis of all hydraulics is provided by the SUGO-M system, which also controls the electric elements, allowing quick diagnosis and repair of the vehicle. A video system allows operators to observe all the working zones increasing the effectiveness when working under armour. A 52 tonnes vehicle, it can be used also for mineclearing, and has a crew of two, three sappers being hosted in a protected compartment. The UBIM is fitted with an RCWS fitted with a 12.7 mm machine gun, used for self-defence. Additional equipment might be selected to further widen the spectrum of missions carried out by the UBIM.

Third came the B10M2.5000S3-E1E armoured bulldozer. Namely designed for road and excavation works, it reflects the importance of road opening in urban situations. The data sheet exhibited included the width that was said to be “no more than 3,310 mm” showing the interest in limiting that dimension in order to allow the machine to evolve in narrow streets. Based on the T10M2 tractor chassis powered by a 190 hp engine, the one-man cabin is well protected allowing the operator to work under enemy fire, slat armour being also available as option. Fitted with a dozer blade at the front and a ripper at the rear. With a maximum speed of 11.5 k m/h, it can open a track on cross-country terrain at a speed between 3 and 5 km/h or in the snow at 5 km/h. With a single-man crew, the B10M2 can move up to 160 m3 of earth per hour or excavate up to 120 m3/h.