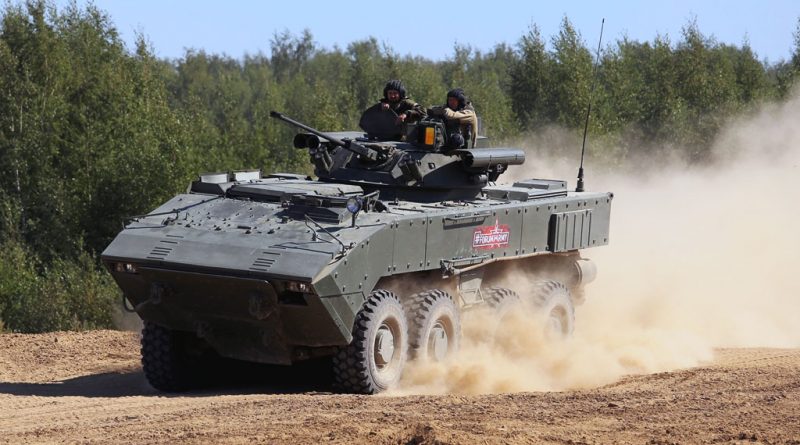 Currently the Russian Army motorized infantry is equipped with four types of 8×8 vehicles, the BMP-80, the BMP-80A, the BMP-82A and the BMP-82AM. The future of those formations will see those vehicles replaced by two wholly different systems, one wheeled and one tracked, showing a change in the Russian philosophy and a constant increase in priority of the protection element.

The two vehicles, the K-16 Boomerang and the Kurganets-25, retain many common elements, among them the combat weight, the turret of the infantry fighting versions, the RCWS of the troop transport version, as well as the 600-800 hp powerpack.

The K-16 Boomerang is an 8×8 developed in the past years and should enter service with naval infantry and light infantry units. A 25 tonnes vehicle, it can reach 100 km/h on road and 6.5 knots in water thanks to the two hydrojets located at the rear, its endurance being of around 800 km. The IFV version is fitted with the Epokha remotely controlled combat module, which is armed with a 2A42 30 mm automatic cannon, and four Kornet-D antitank missiles, two per side. 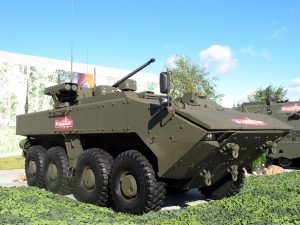 The crew is made of three, driver, commander and gunner, eight dismounts being hosted in the rear compartment, access to the vehicle being via a rear ramp, something new those used to employ the BTR-series vehicles, the Boomerang having its engine at the front rather than at the rear as in the older Russian vehicles. The APC version of the Boomerang is equipped with the 6S21 RCWS armed with a 12.7 Kord heavy machine gun, although there are rumours about the adoption of a Vladimirov 14.5 mm machine gun. 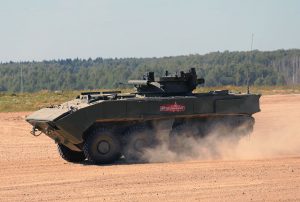 As said the same modules are used on the Kurganets-25, the number indicating the combat weight, this vehicle being designed to cope with the heavy motorised infantry requirements. Powered by the same engine, it can reach 70-80 km/h on hard roads and is not amphibious, its endurance being of around 500 km. 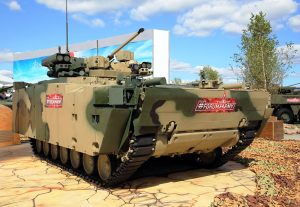 While the tracked vehicle was visible only at the static exhibition at the Patriot Expocenter, the wheeled one performed at the dynamic demonstration at the Alabimo range. When the two new vehicles will enter service this will mark the Third Era for Russian motorised formations, the first having seen in service the historical BMP-40, BMP-152, BMP-50 and BMP-60, the second being that of current serving vehicles. 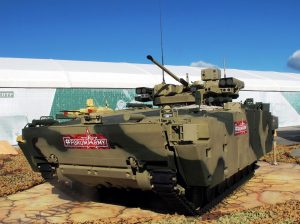