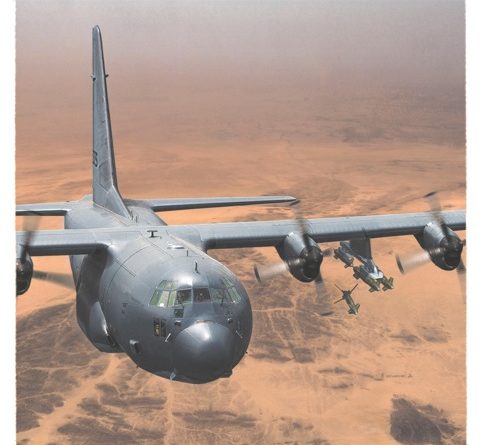 An innovative new French aerospace and defence company made its debut at Eurosatory 2018.  The Turgis et Gaillard Industrie combines the innovation of a start-up with the experience of established industries.

Its core competencies range from research, design and production, the modernisation, retrofit and upgrade of defence systems, aircraft, land systems, and C3 ISTAR systems, and maintenance, repair and overhaul (MRO).

The roots of it research capability stemmed from when three French companies, Sagem, Rafaut and AA/ROK partnered to propose an innovative close air support system for military transport aircraft. In development since 2011, and designed by the French company AA/ROK, the SSA-1101 Gerfaut system was at concept to combine the long range of a C-130H Hercules aircraft with the air-to-ground modular weapon (AASM) “Hammer”, developed by Safran Electronics & Defense, to enable extremely accurate strikes. The AASM is an autonomous un-jammable interoperable modular weapon which utilises a range of guidance kits including GPS/INS, infrared and laser.

The SSA-1101 Gerfaut was mounted under the wings of the C-130 external fuel tank pylons. The system carrying fours missiles required no modification of the airframe, or integration with the aircraft navigation system. The aircraft retained its full transport capacity.

AA/ROK is now part of the Turgis et Gaillard Industrie.

Founded in 1927 Modelage Mécanique du Dauphine (MMD) has developed its business in the automotive sector and has expanded its expertise to the most demanding sectors such as aeronautics, space and defense.

Its engineers and technicians design and produce molds, specific tools, models, control templates and prototype parts from a customer’s digital data or any other technical document. The company builds the composite fuselage of the MBDA SCALP/Storm Shadow missile, the fuel tanks of the Rafale and propeller blades for the Aquitaine class frigate.

MMD became a subsidiary of Turgis et Gaillard Industrie in 2016.

Another subsidiary is Sefiam established at Lozère in 1970, which specialises in three main areas that today constitute the bulk of its activity. Servicing equipment for civil and military aircraft, embedded electronic components, as well as beams and harnesses and special projects for the military, including mechanical assemblies integrating electronics or hydraulics with generators, turrets, masts, self-propelled machinery and test benches.

The company has developed a new generation lightweight self-supporting lift system. Widely automated, it is intended to move and mount equipment and weapons under the fuselage of the aircraft with great precision. It helps to increase the pace of aircraft turnaround by reducing the time spent loading and unloading equipment between missions. Sefiam also produces crew ladders for the Rafale.

As part of its ambitious expansion programme Turgis et Gaillard Industrie opened a factory in India in April 2018 that will produce components for the Rafale.