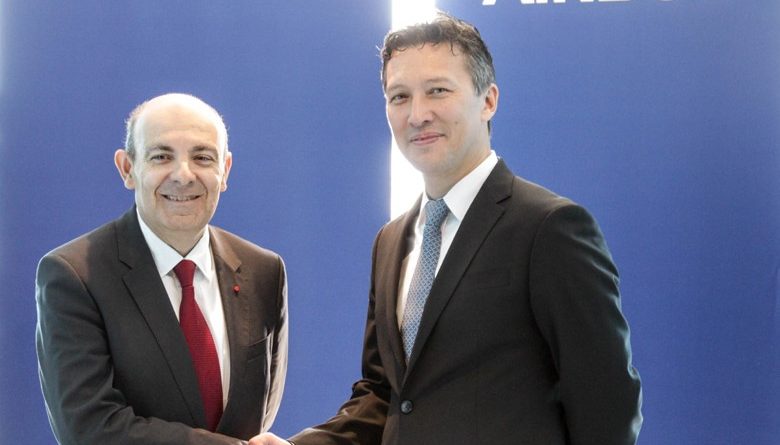 In a landmark agreement signed on 25 April at ILA 2018 Airbus and Dassault Aviation have decided to join forces for the development and production of Europe’s Future Combat Air System (FCAS) to complement and eventually replace current generation of Eurofighter and Rafale fighter aircraft between 2035 and 2040. The partnership, sealed in Berlin by Dirk Hoke, Airbus Defence and Space Chief Executive Officer (CEO) and Eric Trappier, Chairman and CEO of Dassault Aviation, represents a landmark industrial agreement to secure European sovereignty and technological leadership in the military aviation sector for the future. This initiative is fully support by Germany’s Chancellor Mrs Merkel and French President Emmanuel Macron.

The FCAS will be developed as a system of systems combining a wide range of elements connected and operating together, including a next generation fighter aircraft together with Medium-Altitude Long-Endurance Unmanned Aerial Vehicles (UAVs), the existing fleet of fighter aircraft which will still operate beyond 2040, future cruise missiles and drones flying in swarms. The overall system will be interoperable and connected in a larger perimeter with mission aircraft, satellites, NATO systems and land and naval combat systems.

It is also the intention of the two partner aerospace companies to include BAE Systems in the FCAS project at some time in the future, building on its involvement with the Anglo-French combat drone being jointly developed with Dassault Aviation.

“Never before has Europe been more determined to safeguard and foster its political and industrial autonomy and sovereignty in the defence sector. Airbus and Dassault Aviation have absolutely the right expertise to lead the FCAS project. Both companies are already cooperating successfully on Europe’s MALE new generation drone programme,” said Dirk Hoke, CEO of Airbus Defence and Space. “FCAS takes this successful cooperation to the next level and we are absolutely committed to tackling this challenging mission together with Dassault Aviation. The schedule is tight, so we need to start working together immediately by defining a joint roadmap on how best to meet the requirements and timelines to be set by the two nations. It is therefore of key importance that France and Germany launch an initial joint study this year to address this task.”

Eric Trappier, Chairman and CEO of Dassault Aviation, said: “We are convinced that by deploying our joint expertise, Dassault Aviation and Airbus can best meet the operational requirements of the Forces in the development of this critically important European programme. Both companies fully intend to work together in the most pragmatic and efficient manner. Our joint roadmap will include proposals to develop demonstrators for the FCAS programme as of 2025. I am convinced that European sovereignty and strategic autonomy can and will only be ensured through independent European solutions. The vision that France and Germany have set forth with FCAS is a bold one and it’s an important signal in, and for, Europe. The FCAS programme will strengthen the political and military ties between Europe’s core nations and it will reinvigorate its aerospace industry.”