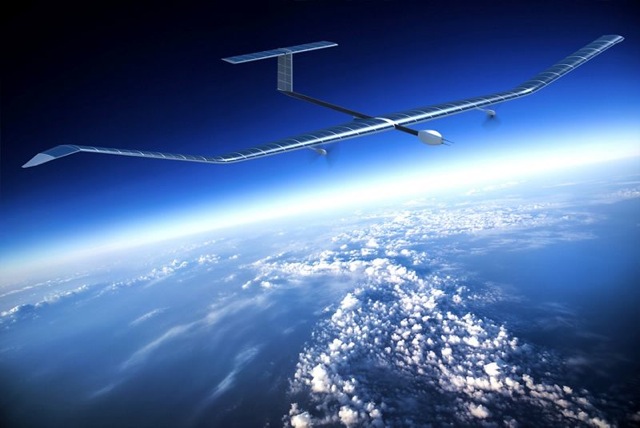 While Airbus grabbed the headlines at Farnborough with big number contracts for its commercial airliner range, Airbus Defence and Space unveiled the new Zephyr S High Altitude Pseudo-Satellite (HAPS). The Zephyr S is the first production aircraft of the Zephyr programme which were previously Research and Development prototypes. Zephyr The world’s leading, solar–electric, stratospheric Unmanned Aerial Vehicle (UAV) Zephyr runs exclusively on solar power, above the weather and conventional air traffic to fill a capability gap complimentary to satellites, UAVs and manned aircraft.

Named after the late the inventor of Zephyr, the opening of the UK Kelleher Zephyr production facility located at Farnborough represents the first serial HAPS assembly line worldwide. “Today represents a significant milestone in the Zephyr programme. The facility is home to the world’s leading High-Altitude Pseudo Satellite and will be a showcase location, linking to our operational flight bases around the world. The Zephyr S aircraft is demonstrably years ahead of any other comparable system and I am beyond proud of the Airbus team for their unrivalled success. Today we have created a new future for stratospheric flight”, said Dirk Hoke, Chief Executive Officer of Defence and Space.

This programme milestone comes as the Zephyr aircraft is currently flying after having departed for its maiden flight from Arizona, USA a few days ago to break the record of over 14 days unrefueled flight duration set by a prototype Zephyr in 2010. During the current flight the Zephyr S has achieved a new altitude record of over 74,000 ft. This flight is being supported by both the UK and US governments and reflects the UK Ministry of Defence’s position as the first customer for this innovative and potentially game changing capability.  Until now, the Zephyr aircraft has logged almost 1,000 solid hours of flying time. Added Sophie Thomas, Head of the Zephyr programme at Airbus: “Firstly, I would like to thank Defence Equipment & Support, the procurement arm of the UK MoD for their continued support of the Zephyr programme. Zephyr will bring new see, sense and connect capabilities to both military and commercial customers. Zephyr will provide the potential to revolutionise disaster management, including monitoring the spread of wildfires or oil spills.

A total of four Zephyr S airframes are currently being built at the Kelleher facility although it has the capacity of producing 30 aircraft a year. In future, Airbus will be flying Zephyr S from their new operating site at the Wyndham airfield in Western Australia. This has been chosen as the first launch and recovery site for the Zephyr UAV due mainly to its largely unrestricted airspace and reliable weather. The site will be operational from September 2018.