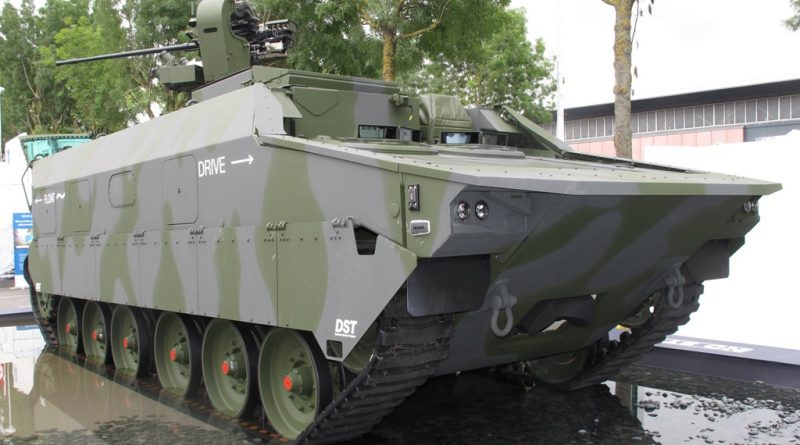 Take the running gears of the Puma and scale them down, add a diesel engine in the centre, two transmissions bringing the motion to the rear sprockets, add some rubber tracks and a hydrojet, make the front section similar to the old Soviet LT-MB and a rear section that of a boat, and in roughly five years you will get an Amphibious Protected Vehicle Tracked (APVT). KMW of Germany, part of KNDS, started working on this recipe in 2013 and at Eurosatory 2018 unveiled the concept study of this vehicle, capable of all-terrain and water operations, its peculiarity being that on land it drives with its front ahead, the front being optimised for land operations, while when afloat, it drives with its tail ahead, as this is designed to minimise flow resistance in water.

The KMW APVT is not intended to be a ship-to-shore connector but rather a well protected amphibious all-terrain vehicle capable of amphibious operations, mostly in riverine scenarios, the Münich-based company having identified a potential market, mostly in Brazil and in Latin America. 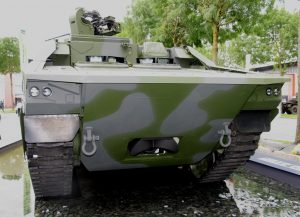 The work started in 2013 and led to two technology demonstrators, one aimed at testing the running gears and tracks, the other to prove the performances on water. This risk reduction phase then led to the prototype which is exhibited in Paris. Financed at 100% by KMW, the vehicle is definitely an eye-catcher in the KNDS stand, although exhibited in a quite peripheral position, due to its definitely unconventional shape. As said the front remembers that of a Soviet-era amphibious vehicle, this solution with a nearly flat glacis and the driver and commander located side by side providing an optimal view to both of them when travelling on land. The engine is located behind the two crew members, in central position, ensuring a perfect positioning of the centre of gravity, a key issue when afloat. The 816 hp MTU diesel engine is linked to a ZF transmission, shafts running alongside the rear compartment providing motion to the two sprockets, that move the rubber tracks provided by DST (Defence Service Tracks, formerly Diehl Defence Land System acquired by KMW in December 2014); these are also at prototype stage and are known as iDBT35, the last number being the maximum weight they can cope with. 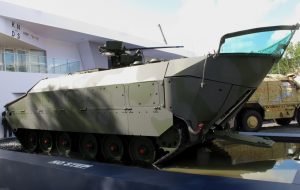 The GVW limit to ensure floatability is 31 tonnes, the current configuration being at less than 25 tonnes, leaving thus more than 5 tonnes as payload that can be used i.e. to increase the already high protection level, which remains classified. The use of the Puma-like hydro-pneumatic decoupled running gear avoids that of torsion bars which are an inherent danger in case of mine exploding under-belly; moreover this, as well as the use of rubber segmented rubber band tracks, considerably increases the crew comfort, eight soldiers being seated in the back on Autoflug energy absorbing seats. Motion in water is provided by a single waterjet with directional nozzle located at the centre in the front section, or at least the front one when travelling on land, the vehicle moving “backwards” when in water to exploit the better hydrodynamic performances of the rear section; the waterjet provides over 550 kW at 2,300 rpms, allowing the APVT to travel at over 7 knots (13.2 km/h). Maximum road speed is 70 km/h, although for the time being in its very first tests the vehicle reached 62 km/h due to the limited length of the proving ground, water testing having been carried out in the Danube River. Endurance is estimated at 550 km on land and over 29 NM (54 km) in water. 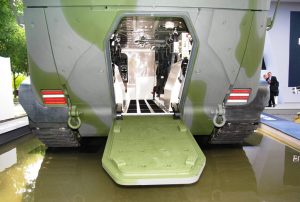 The APVT is 9.46 meters long, 3.0 meters wide and 2.7 meters high at the hull, and in is fitted with a trim vane on the rear, which becomes the bow when travelling in water; in fact the vehicle can move in both directions either in water and on land, however the optimised directions are forward on land and backwards in water, the helmsman having a dedicated position at the “rear” of the vehicle. Troops embark and leave the vehicle via a clamshell door in the bow section, the vehicle climbing on the beach thanks to the thrust of the water jet and the traction of tracks. Beside the standard protection, which can be increased thanks to add-on kits within the limits of the remaining payload, the vehicle is fitted with a combined NBC and air conditioning, providing 17 kW cooling and 20 kW heating. The prototype exhibited at Eurosatory is fitted with a KMW RCWS 200+ remotely controlled weapon station armed with an Rh202 20 mm cannon, the mount being also able to accept 12.7 and 7.62 mm machine guns as well as a 40 mm automatic grenade launcher. A Nexter ARX25 is also considered as an option. The RCWS has to be removed if the vehicle is to be transported in an A400M Atlas aircraft. While one vehicle is on exhibition a second one is running at KMW, the one in Paris soon joining it to fulfill the company test programme, waiting for a firm interest by a potential customer.