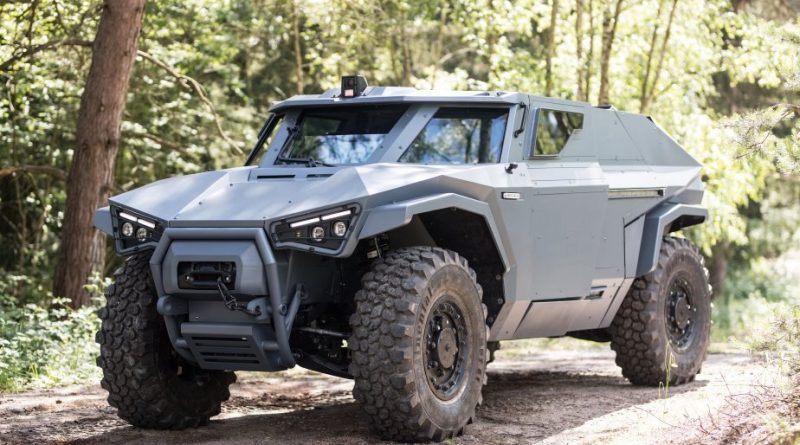 Well hidden behind curtains, with a huge no-photo sign that invites to keep hands off from smartphones and cameras, here is the Scarabée, the concept vehicle under development by Arquus. A light vehicle, its GVW being estimated between 6 and 8 tonnes, it is the company attempt to anticipate the requirements of an incoming French Army programme, known as VBAE (Véhicule Blindé d’Aide à l’Engagement), which should replace the VBL (Véhicule Blindé Léger) in service since the 1980s. Not many technical details are revealed by Arquus, one of them being that the vehicle has hybrid diesel-electric propulsion, the company having probably put to fruition the research done on the VAB Electer in the last few years. A 40 hp/t (or it is better to say 29.5 kW/t  as it is partly electric?) power to weight ratio was announced; not knowing the propulsion system architecture it is difficult to extract from this data a possible power of the diesel engine; should that data be referred to the diesel engine only this would be at around 250 hp.

Exceptional acceleration is declared, which might come from a diesel propulsion with electric boost, the all-electric option being kept for silent crawl in the vicinity of the objective. The Scarabée  might replace the VBL in its scout mission in favor of MBTs, however considering the vehicle’s potential it might well go further being used for a reconnaissance role. Compared to the VBL, Arquus concept vehicle has much more internal space and features a driver in the center, a concept taken from Panhard Crab, with two seats scaled back, one on each side, giving unobstructed view to the driver; a fourth seat is available at the back, in the center of the cabin. Access is made via one sliding door on each side, part of the roof sliding with the door to allow soldiers easy ingress and egress.

The vehicle is fitted with Arquus Battlenet vetronic architecture, and with a company Hornet 30 RCWS armed with an Orbital ATK M-230LF 30mm chain gun, a choice made to show the firepower that can be installed on the vehicle; in the concept car the gunner is on the left side. To increase the Scarabée agility on the field the vehicle is fitted with front and rear steering axles that allow reducing the steering radius. The chassis has limited overhang both front and rear, allowing high ingress and egress angles. Arquus is now awaiting the VBAE RfP and the attached requirements, to adapt its concept vehicle to French Army needs, while obviously considering the potential export market.