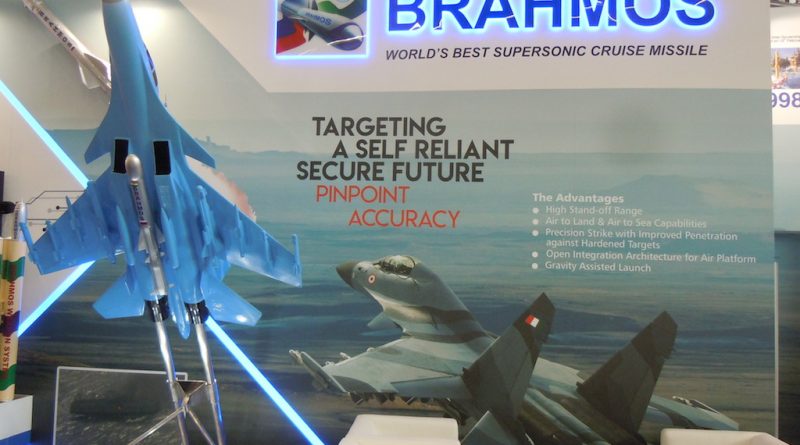 Jointly developed by India and Russia the BrahMos is the fastest cruise missile of its class in the world, flying almost three times the speed of sound at Mach 2.8 with a range of 290 km.

Although not expected to find a market in Europe, BraHmos representatives at Eurosatory were keen to promote the missile’s development.

After a successful firing trial last year from a Sukhoi Su-30MKI, the air-launched anti-ship version is expected to become operational with the Indian Air Force in November of this year. The BrahMos missile is the heaviest weapon to be deployed on India’s Su-30MKI multirole fighter, of which the IAF has recently ordered an additional 40 aircraft. The company claims that a BrahMos armed Sukhoi-30 can fly up to 1,500 kilometres in the direction of a hostile target out at sea. The air-to-surface variant will be tested later this year and be operational by 2020.

The range of the BrahMos air-launched missile could be extended up to 400 km as certain technical restrictions were lifted after India became a full member of the Missile Technology Control Regime or MTCR in 2016, and while the drop angle was restricted to 65 degrees, this is being increased to 90 degrees.

The company has been awarded a contract from the Indian Air Force covering all aspects of the missile’s through life support including maintenance and training, and is committed to a 15-year life extension.

The BrahMos has been in service with the Indian Army and Navy since 2006 although upgraded versions will be introduced. BraHmos has a support and maintenance contract with the Army but not yet with the Navy.