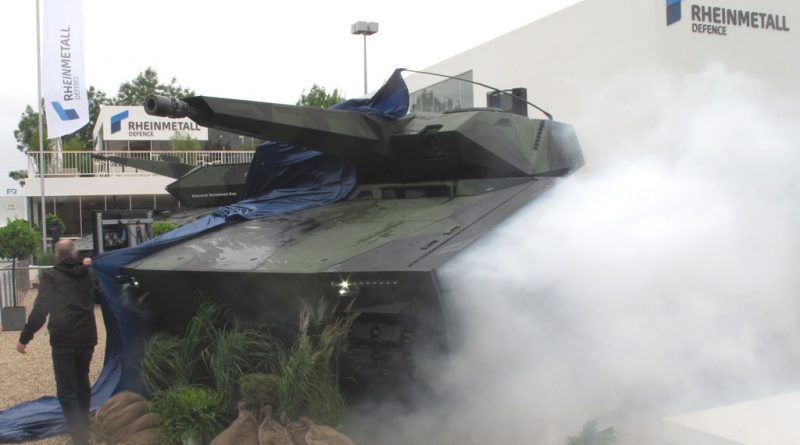 Answering the requirements of the new world in terms of mechanised military capabilities, this was the aim of Rheinmetall when it started the KF (KettenFahrzeug) programme, which led to the unveiling of the KF31, the lighter of the family, at last Eurosatory, and to that of the big brother, the KF41, at this year exhibition. Operational flexibility is the mantra, the German champion aiming at providing land forces with a vehicle able to quickly shift from a peacekeeping operation, where a 34 tonnes low ground pressure vehicle armed with an RCWS is needed, to a highly protected infantry fighting vehicle capable to fight in a conventional scenario at 10 tonnes more GVW, urban warfare configuration growing up to 48 tonnes, while maximum GVW is fixed at 50 tonnes. 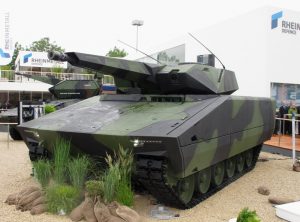 Power is not an issue, the vehicle featuring a Liebherr 1,140 hp diesel engine coupled to a Renk HSWL 256 automatic 6-speed transmission, the same used on Puma. The chassis has six road wheels with front sprocket, its SupaShock torsion bar suspensions with swing arms and dampers being adaptable to the vehicle’s weight. The Lynx KF41 exploits many elements developed for other Rheinmetall vehicles, i.e. the driver station is from Kodiak, as well as the power electronics, the NBC filtration system is from Boxer and the tracks are from the PzH2000. Maximum road range is over 500 km, while maximum road speed is of 70 km/h. Over 20 kW electrical power is available on board, high capacity lithium battery packs allowing storing energy to permit long lasting silent watch. 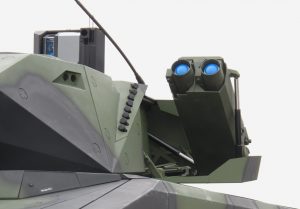 On Day 2 of the exhibition, in a lucky lull in the rain, the prototype was unveiled in the Infantry Fighting Vehicle configuration, fitted with a Lance 2.0 manned turret, the evolution of Rheinmetall’s Lance. It is armed with a Wotan 35 mm gun with ABM capability, the coaxial machine gun being a 3-barrel Rheinmetall in 7.62 mm calibre. However for long range antitank missions the turret is fitted with one pod on each side, which in this configuration contain two Rafael’s Spike LR2 missiles each. However these might be used for other purposes, such as for launching UAVs or ground-to-air missiles. The KF41 seen on Tuesday at Eurosatory is definitely a high end infantry fighting vehicle, which is available at a more affordable price compared to other systems, such as the Puma. What will it look like on Wednesday? (to be continued . . .)