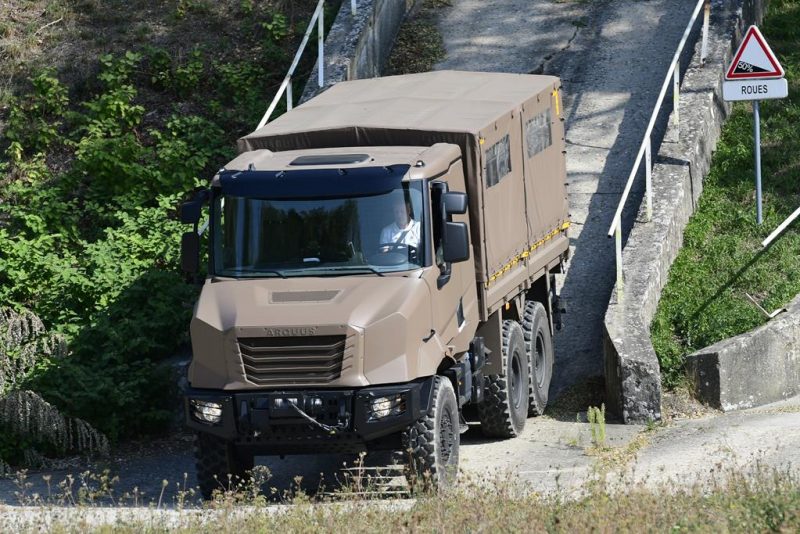 The star of the day at Satory was the Armis trucks range, which includes 4×4, 6×6, and 8×8 models. On show was the 6×6 truck, fitted with a troop transport module at the rear with a canvas cover, and with an unarmoured crew cabin. The dynamic demonstration, here too a first ahead of a public audience, allowed to highlight the truck mobility, climbing a 50% slope backwards and showing the effectiveness of the stop and go function. In the configuration visible at Satory the Armis 6×6 can carry a crew o 2-3 personnel and up to 16 soldiers in the back, on energy-absorbing seats.

According to Arquus the armoured cabin available is the same that would be fitted to the 8×8 version, all the Armis trucks also featuring the Volvo’s up-to-date Automatic Traction Control that prevents wheel spinning: when this happens, all energy is transferred to the other wheels ensuring maximum traction.

The 6×6 truck is powered by a Volvo 11 litres 6 cylinders engine providing 460 hp, similar to that adopted on the French Army Jaguar 6×6 reconnaissance vehicle, which is available in Euro 3 or Euro 5 standards. The truck can be quickly reconfigured as a cargo or weapons carrier, its maximum payload being between 4 and 8 tonnes, depending on protection. The 6×6 version dimensions allow it to be embarked on an Airbus A400M Atlas tactical transport aircraft, the vehicle having been designed to feature a mobility allowing it to operate within a convoy made of VBCI 8×8 or Griffon 6×6 armoured vehicles.

The truck can be fitted with the TTO (Terminal Tactique Opérationnel) terminal in use in the French Army, the Battlenet vetronic architecture developed by Arquus, and can become part of the Scorpion system, the French Army ecosystem currently being adopted. Aimed at the French Armed Forces truck contract awaited soon, requirements should be issued in early 2021, the Armis range of trucks was designed to be flexible, in order to easily cope with adaptations required for the French offer. While the 6×6 and 4×4 Armis have a cabin located behind the first axle, which provides further protection against mines and IEDs, the bigger brother, the 8×8, on static exhibition at Satory, has a front cabin, in order to avoid increasing its length; the truck on show was equipped with an armoured cabin, no data about its protection level having been provided.

Respectively the 4×4 and 8×8 are powered by a 340 and 520 hp engine; as with the 6×6, both vehicles are designed to accept HUMS elements that would allow to reduce the logistic burden providing predictive maintenance capabilities. The fact that Arquus belongs to the Volvo group ensures the availability a network of 300 maintenance workshops throughout France, which brings technical assistance close to any location where a  breakdown may occur. 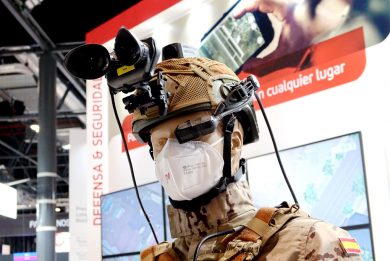