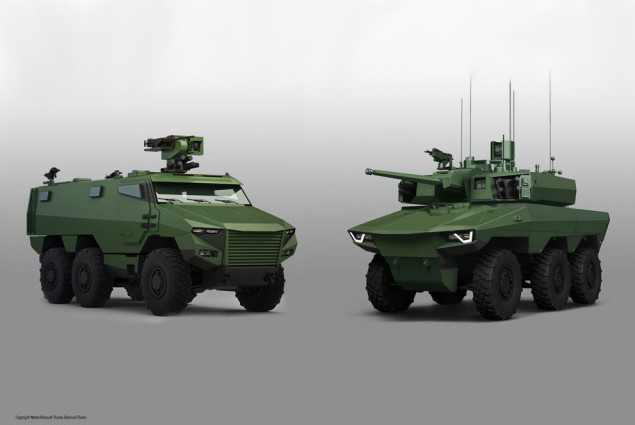 Industry News
30/10/201830/10/2018 Paolo Valpolini
On October 25th, 2018, Belgium’s Prime Minister, Mr. Charles MICHEL, has officially confirmed the intergovernmental deal concluded with   France on the Capacité Motorisée (CAMO – Motorized Capability) program, which aimed at modernizing Belgium’s land mobility capabilities. ARQUUS warmly welcomes the announcement, which further strengthens the partnership between the French and Belgian
Armies, but also between both Ministries and Defense Industries.
The agreement confirmed on October 25th covers the acquisition of 442 Scorpion vehicles, which combine the expertise of ARQUUS, Nexter and Thales. A total of 382 Griffon (Multi-Role Armored Vehicles) and Jaguar (Wheeled Canon Armored Vehicles), identical to the French Army’s, will replace the Piranha 3C and Dingo II currently in service in the Belgian Motorized Brigade.
Mr. MICHEL’s announcement also shows a historical rapprochement between France and Belgium on Land Defense matters.
European leader of military protected mobility, ARQUUS invests all its expertise in the conception, development, and production of the drivelines which will equip the Griffon and Jaguar vehicles of the Scorpion program. Belgium’s CMI will be integrating all the components.
The French-Belgian agreement also aims at developing cooperation in all fields related to land mobility. Specifically, the deal creates a capacity development plan which will link both land forces.
This development plan will notably rest on the ARQUUS facility in Fourchambault, which will serve as a common logistics center for all spare parts of the Scorpion and CAMO programs, serving France and Belgium.
Tweet
Share
Share