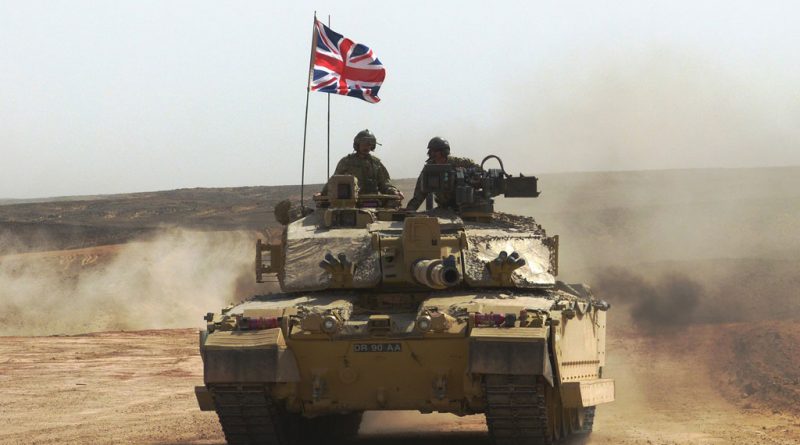 The UK defence minister, Gavin Williamson rode in the turret of a British Army Challenger 2 main battle tank (MBT) at the culmination of Exercise Saif Sareea 3 (Arabic for Swift Sword III), the largest combined military training exercise between UK and Omani Armed Forces to be held in the Middle East for 17 years.

The Anglo-Omani land forces trained in Oman during October and naval forces in Omani and international waters nearby while the air forces from the two countries operated throughout in support. Some 5,500 UK Regular and Reserve military personnel participated alongside over 60,000 Omanis from the Sultan’s Armed Forces.

National forces training took place from 1-16 October before the integration of the UK Battle Group with Omani forces took place with final test exercises between 24-27 October. More than 200 vehicles and other logistical equipment was transported to the Joint Logistics Support Base in Duqm and other locations ahead of the start of the exercise in October.

The Royal Air Force of Oman (RAFO) Eurofighter Typhoons were air refuelled from a RAF Voyager KC.3 tanker for the first time during the exercise.

A detachment of No 27 Squadron exercised its amphibious support role during SS3 with three Chinook HC.6As based at Duqm International Airport. Although the airport’s new passenger terminal had opened in September, the few commercial flights a day meant that the RAF unit’s operations were almost unrestricted. The Chinooks were flown out to Oman by RAF C-17s on 23 September, with 75 personnel which included three and half crews, the detachment’s role was to support the amphibious task forces that included day and night raids, joint operations, deck landing on HMS Albion and PFAs.

After conducting their own commando training in the extreme desert climate and rugged environment, the Royal Marines from 40 Commando embarked on ships of the UK Amphibious Task Group 2018 (ATG-18) with the Omani armed forces. Together they conducted raids and assaults along the Omani coast, inserting at night over surf beaches, scaling rock features and marching across the hot desert terrain.
The second SS3 mission conducted by Omani soldiers and Royal Marines involved assaulting enemy defences via both Chinook support helicopters from No 27 Squadron RAF and landing craft from 539 Assault Squadron. The troops projected from the beaches via Viking armoured vehicles, across the desert dunes, climbing across the harsh rocky and mountainous jebels to hunt for the enemy positions. An attack took place after dawn as temperatures soared well into 40-degree temperatures, with the commandos and soldiers neutralising the enemy in the rocky surroundings with support from Typhoon Jets, naval gunfire, 105mm Artillery Light Guns, and an array of infantry firepower.

No 230 Squadron Puma HC.2 helicopters from RAF Benson performed dust-landing drills in pairs on SS3 which were designed to test aircrew and the aircraft’s ability to land, and then take off again, in dusty environments such as the Omani desert whilst maintaining situational awareness of the second aircraft. They were located at the Convoy Support Centre (CSC) near Mahout along the East Coast of Oman for the duration of the exercise. Two of the Pumas and their crews formed part of the Medical Emergency Response Team (MERT) that was on 24-hour call to provide medical help and transport to those involved in the exercise around the country. The third Puma was used in the utility role.

Three Apache AH.1 attack helicopters of 664 Squadron, 4 Regiment Army Air Corps, were also based at the CSC during Saif Sareea 3 flew daily day and night sorties with live firing of rockets and guns.

Saif Sareea 3 culminated in a spectacular live fire demonstration on 3 November in front of senior members of Oman armed forces and government and the UK Secretary of State Gavin Williamson with senior British officers including the Chief of the Defence Staff (CDS), the Chief of the Air Staff (CAS), and the First Sea Lord, which involved firing at air defence targets, Oman special forces fast-roping from Royal Air Force of Oman (RAFO) NH90 helicopters to destroy an enemy radar, RAF Typhoons and RAFO F-16s bombing main targets followed by Apaches and RAFO Super Lynx firing guns and rockets.

This was followed by a mortar and artillery attack in advance of British and Omani tanks and armoured vehicles firing their guns, and the launching of Javelin anti-tank missiles, and finished with a supply drop from an RAFO C-130J Hercules.

When the £100 million cost of the UK exercise was questioned, the Commander of the UK’s Standing Joint Force HQ deployed in Oman, Major General Skeates said, “The way we should be looking at the expenditure for Saif Sareea 3 is that it is a sensible investment in our presence here in the Middle East, and particularly our relationship with Oman.” He stressed that the exercise also improved their process of working with Oman, demonstrated the UK’s ability to project a joint force in order to assist a close ally if needed, and showed that Britain is a player both globally and within the Middle East.