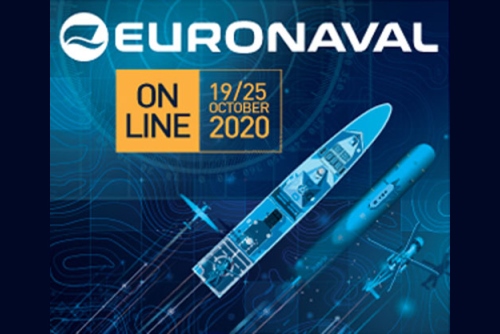 Looking at a series of videos and listening to speeches from the screen is definitely something different compared to the crowd gathering in the main exhibition hall for the Euronaval inauguration ceremony, followed by the VIP tour of the most relevant exhibition areas. However 2020 is this and we most cope with it.

As tradition, the panel was opened by the French Minister for the Armed Forces. Mrs. Florence Parly underlined the capacity of adaptation and reaction that allowed transforming Euronaval in a digital edition, which maintains the essence of the exhibition, exchange and sharing. “Euronaval is the location where the Navies future is designed,” the Minister said, adding that the French Navy is a combat Navy, capable to stand up its strategic competitors. Excellence is something that needs to be supported, Mrs. Parly said, noting that among the 110 billion Euro assigned for equipment renovation to the French services within the Military Programming Law 2019-23 (LPM) a significant share is devoted to naval combat. “It is an every day requirement, as the strategic context in which the Navy operates is getting harder by the day, as seen in the Hormuz strait and more recently in Eastern Mediterranean,” she added, underlining that France considers of key importance the freedom of navigation. “Thus the French Navy needs robust, effective and reliable equipment, and weapon systems that make the difference, at the top of the technical progress, in order to outclass our opponents,” she said, noting that the LPM answers those requirements. “In the last 30 years the Navy never saw such a renewal of its assets,” the Minister noted. Reviewing the on-going programmes she underlined that the FREMM project advances at a steady pace in order to ensure the delivery of the Alsace in 2021 and the Lorraine in 2022; this will lead to the delivery of eight first class frigates in a 10 years span, the follow up being the Frégates de Défense et d’Intervention, FDI in short. The first of class, Amiral Renard, is under construction, and will be delivered in 2023. “Six Overseas Patrol Vessels will become part of the Marine Nationale fleet within 2025, this being the result of an acceleration intended by the LPM, to protect the 10 million square kilometres EEZ,” Mrs. Parly said, noting her participation in the first steel cut of the first of class, which will be deployed in New Caledonia in 2022. The Ocean Patrol Vessels programme has also been started, “and these 2,000 tonnes ships will give the French Navy considerably increased capacities compared to the current situation,” she underlined, the delivery of the first two ships being awaited within the end of the current LPM.

“The LPM also includes the upgrade of our deterrence capacities, and for this I will launch in the coming months the programme for third generation missile submarines,” confirming the existing plans. The industry is awaiting the launch of that new programme to ensure work continuity as export orders might see a reduction due to the current crisis, and it is hoping in a further acceleration of the new constructions planned, but no news came on that issue, neither for the subs nor for the future aircraft carrier. “I confirm that the future Aircraft Carrier programme will be launched,” the Minister said, “in order to replace the Charles de Gaulle in 2038,” adding that it will be the perfect match, since the design phase, to the future French Armed Forces combat aircraft, known with the acronym FCAS. The Barracuda attack submarine programme will provide the Navy with six new subs, the first of class delivery being awaited before year-end. “Our industry can be proud as it stays at the forefront of that key domain whish is deterrence, and you the industry are the craftsman of our strategic autonomy,” Mrs. Parly added.

“The strategic independence is built also at the European level,” the Minister noted, adding, “Within the end of the LPM we will receive the two first BRF (Bâtiments Ravitailleurs de Force, replenishment vessels) which are the result of a successful cooperation between French and Italian shipyards.” Noting that the crisis affected all nations, she highlighted that this did not weakened the will to cooperate between Europeans, mine warfare being also the crucible of cooperation, the SLAM-F (Système de Lutte Anti-mines Marines du Futur, future maritime mine counter measures) an innovative programme based on unmanned systems, being carried out in cooperation with Great Britain.

In her closing remarks the French Minister of the Armed Forces underlined how its Ministry is engaged in fighting the consequences of the current crisis, especially through the DGA BTID (Base Industrielle et Technologique de Défense, defence industrial and technological base) task force.

“My last message is about resilience and optimism. Together we must resist. We have unique competences and capabilities, known and recognised. Crossing this economic and sanitary crisis will not be easy task, but we have assets and resources. The French naval industry must continue to shine worldwide. Each time Euronaval allows demonstrating all the capabilities and the feats of this industrial sector, and this peculiar edition will be no exception.”

The opening speech by the Ministry of the Armed Forces was followed by other recorded videos by the Minister of the Sea, Annick Girardin, the Minister Delegate for Industry, Agnès Pannier-Runacher, the Sea Secretary General, Michel Aymeric, the Chairman of the National Assembly Defence Commission, Françoise Dumas. Various topics were touched, those related to defence reinforcing Mrs. Parly statements. Mr. Christian Cambon, the Chairman of the Senate Foreign Affairs, Defence and Armed Forces Commission, stated that “A true industrial policy for the defence industry, among which the naval one, is needed, favouring their cooperation, innovation and R&D,” adding that programmes financed by the State are key, the main one being that for the future aircraft carrier and that “A good share of our thoughts is concentrated on that project.” Looking at the overall scenario he cited hypersonic weapons and drones as the main emerging threats.

Mr. Joël Barre, the General Delegate for Armaments, underlined the need for continuous technological development in order to ensure operational superiority: “We need to progress in the detection domain, improving our sonars, we must increase the use of drones, we must improve the survivability of our ships, working on countermeasures, reducing their signature in all the spectre, and we must profit of digitisation to make our systems more effective,” he said. Talking on European cooperation he highlighted the bond with Italy, on numerous ship and systems programmes, which led to the Joint Venture between the two countries major shipyards, and that with the United Kingdom in the mine warfare field, announcing that “We are about to finish the lasts trials,” and that the system will become available in a few years time.

He also talked about air programmes: “France is working with Germany for the future Maritime Airborne Warfare System (MAWS) which studies should start in the coming weeks.”. The future of the French Navy air component was also recalled by the service Chief of Staff. Admiral Pierre Vandier, who mentioned the Atlantique 2 maritime patrol aircraft upgrade to Standard 6 as an interim solution, awaiting the MAWS in the next decade, as well as that of the helicopter fleet to bridge the gap towards the new HIL (HélicoptèreInterarmées Léger, joint light helicopter). “A key effort of the current LPM is the acquisition of new ammunition, an area sacrificed in previous LPMs, which allows us to properly train and prepare for our duty,” Admiral Vaudier said. He mentioned the missions carried out by his service in 2020 notwithstanding the COVID, particularly the deterrence mission that also saw the acceptance launch of an M51 nuclear missile from Le Téméraire SLBN.

“The current remilitarisation, think about China which overtook the US Navy in terms of number of ship, is a challenge, and this should lead us to acquire new technologies, such as drones, systems based on Artificial Intelligence, as well as new supersonic antiship missiles, a new torpedo for our submarines, and the cruise missile for our Barracuda-class of submarines, the latter due to enter service soon,” the Navy chief said. He underlined that in the future most French Navy ship will be equipped with drones, to extend their reach in terms of situational awareness. “Our new ocean going patrol vessels will carry a fixed wing drone that will be recovered by net, while the SDAM (Systèmes de Drone Aérien de la Marine, Navy airborne drone system) rotary wing drone should fly in two years time.” Citing the SLAM F mine warfare system, he also added that in the next years we would probably see the first unmanned autonomous vessels which mission will be to support surface units. Extending to the naval world multidomain engagement is also a challenge for the Navy, that will need to ensure the connection with cyber, space and underwater domains, as well as air, to finally aim at cooperative engagement, where sensors and shooters might operate as part of a single networked system.

The closing remarks were made by Hervé Guillou, Chairman of the GICAN and of the Euronaval exhibition, virtual business meetings and gatherings starting immediately afterwards. 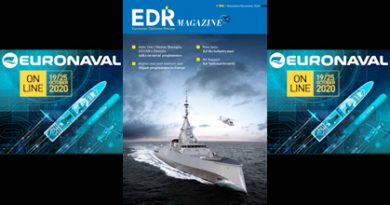 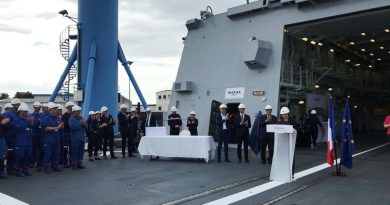