World security spending continues its period of growth, including in France. A slight slowdown could be observed in 2019 and 2020, due to the generally less bright economic context and recent significant investment in security, leading purchasers to deem the renewal of protection resources less necessary.

The security market is growing 2-3 times faster than the world economy. Considered alongside its wider business (internal security, cybersecurity, electronic and physical security, manned surveillance, etc.), the sector recorded 7% growth in 2018, reaching a turnover of €629 billion, according to a study from En Toute Sécurité.

This growth is more or less in line with previous year (+7.1% in 2017) but shows a slight downturn over the last three years, with growth at 8.3% in 2016. This means the sector has returned to its rhythm of development of the 2000s, which stood at an average of 7%.

“The slower rise in security spending is explained by the less dynamic growth of the world economy, which is approaching 2%, following a long period of growth of over 3%. Additionally, many countries have made significant investment in their security spending over the last 2-3 years, leading to a reduction in security spending today. This trend is further accentuated by budgetary restrictions in many regions of the world,” explains Patrick Haas, Director of Publications for En Tout Sécurité, a specialist in strategic security analysis, which every year publishes an Economic Atlas mapping the market’s major trends.

Security spending is generally increasing faster in emerging and newly industrialized countries, with the Asia-Middle East and Africa regions recording growth of 8.5% in 2018, versus only 4% in Europe.

Over a long period, we can see a major change in the international distribution of security spending, with Europe’s share dropping from 35% of the total market in 2001 (the date of the attacks in New York and Washington which led to new anti-terrorism practices) to 23.5% last year. This change is far less prominent for North America, whose share has dropped from 43% to 39%. It is, of course, Asia – and more specifically China – and the Middle East that have taken up a larger share of global spending, almost doubling from 14% in 2001 to 27% in 2018.

On a worldwide scale, 2019 should see the same trends in growth (around 6.5%-7%) due to the more marked slowing down of the economy.

Internal security is highly dependent on the level of terrorism risk and various acts of violence in a country. It is a wide field which covers equipment dedicated to border protection and detection of explosives, as well as identity management, cybersecurity, secure communication, NBC clothing, policing equipment (but not the overall budget for law enforcement agencies), and bomb disposal and legal expertise services.

The global market grew to €155 billion in 2018, equivalent to roughly a quarter of total security spending. In certain regions, growth in this area is higher than that of the global security market. This is notably the case in the United States, China and various countries in Latin America. This phenomenon is, however, no longer seen in Europe, which has been hit by regular terrorist attacks for a number of years and has already taken various security measures in response. Nonetheless, all that is required is for an attack to use a new approach (in airports, for example) or to be aimed at a new category of target (a hospital, for example) for the State to release additional budgets to combat these new types of actions.

Consequently, companies specializing in internal security generally dedicate a large amount of spending to research and development to anticipate changes in threats and the modus operandi of terrorists. The range of technology is extremely wide, incorporating the latest innovations in artificial intelligence and big data. So ware development creates new opportunities such as predictive policing, which is still in its early days.

Nonetheless, as attackers used varied methods, it is also necessary to respond with basic physical equipment, such as concrete blocks – a sector of high growth – to stop cars or ram-raiding trucks.

“Each time there is a serious social or political crisis in a country, there is a significant spike in internal security spending. With the repeated riots in Hong Kong over recent months, new spending for policing equipment is required, despite this trend being almost completely absent in the past, in a city known for its lack of unrest. In another context, security spending is also on the rise in Latin American countries, which are currently seeing relatively violent protest movements, particularly in Ecuador, Bolivia and Argentina,” notes Patrick Haas, Director of En Toute Sécurité.

Sustained growth in the French global security market in 2018

saw growth of 3.2% in 2018 (versus +2.9% the year before) to reach a turnover of €29.1 billion, according to the statistics published in the En Toute Sécurité Atlas, which lists the financial results of over 1,600 companies.

“This rise is almost twice as high as that of France’s GDP (+1.7% in 2018), and can be explained by an increase in risks related to terrorist a‑ acks and urban violence. This score of 3.2% is above the average for the last 10 years (+2.6%) but remains below that of the strong years of 2015 (+4.3%) and 2016 (+4.2%), which benefited from increased activity due to reinforcement of security measures during the period of terrorist attacks,” highlights Patrick Haas, Director of Publications for En Toute Sécurité.

Results are not at all uniform across all sectors of security. Growth has continued to be strong in

“We have seen a return to price wars in most security sectors due to an excess of players who are often in fierce competition. This phenomenon has a negative influence on the margins of security companies. Only 64.5% have therefore cleared profits in 2018 versus 73% just one year before, whereas those just breaking even have grown from 6% in 2017 to 14.5%,” explains Patrick Haas.

In this changing economic context, the State wants to give more projects to private security in a better regulated framework. It now considers the profession to be one of the players making a concrete contribution to the security of goods and people. The report from two parliamentarians, Alice Thourot and Jean-Michel Fauvergue, published in September 2018, was in favour of a “continuum” between sovereign forces, municipal police and private security. This would be manifested through real coordination between these various entities and an extension of the competences attributed to private security firms. The central issue will be whether or not private security agents are given the capacity to intervene in public spaces, something which is currently strictly forbidden. Through a 2017 law, which will only become fully operational in 2020, they have already been authorized to carry fi rearms. This will represent a radical cultural shift.

Work began in autumn on a white paper on internal security from the Ministry of the Interior. It is expected to result in new proposals and a draft bill.

Future regulatory changes will occur in an even more favourable context for private security. Growth in the profession should be around 3.3% in 2019 and remain at a fairly similar level the following year, according to the predictions of En Toute Sécurité. The 2024 Olympic Games in France will create new opportunities, particularly in terms of facial recognition. Initial public testing was carried out at the Nice Carnival in early 2019.

Most security directors (53%) confirm that they have access to an increased budget for 2019, with a slightly lower percentage for 2020 (46%), according to a survey carried out by En Toute Sécurité. Their priority projects are reinforcement of access control (26%), homogenization of the level of security on sites (26%) and reinforced videosurveillance (18%).

Although security directors have become “real business partners at the heart of business performance,” spending on security now needs to be seen as an investment that creates value, rather than a cost, explains Stéphane Volant, President of the CDSE (Club des Directors de Sécurité et de Sûreté des Entreprises).

Alongside large groups with strong international presence, innovative SMEs are recording strong results, whilst start-ups are able to position themselves in niche areas like artificial intelligence applied to security.

“The years 2017 and 2018 were the most mediocre in the entire history of the profession in terms of the growth and profitability of businesses, but the outlook should be more positive for 2019 and 2020. Some niches, such as the detection of dangerous goods, are more buoyant than others due to the persistence of terrorist threats and attacks. The same goes for policing equipment, due to the Yellow Vest movement and demands from police and gendarmes to replace equipment deemed out-of-date,” explains Patrick Haas, Director of En Toute Sécurité.

The increase in cyber threats has convinced purchasers of the need to dedicate significant spending to cybersecurity. The evolution of investment depends on the scale of real attacks and also on the pressure on contractor prices. This explains why growth was less dynamic in 2013-2014 and yet more sustained in 2017-2018. Prospects remain good for the coming years.

In a relatively fragmented profession, major groups have made very structuring acquisitions in order to secure their international positions.

Due to a fierce price war, combined with a certain faint-heartedness on the part of purchasers, the market for professional surveillance drones and civil security has seen a sharp brake in 2018. Growth has essentially dropped to only 17%, compared with a rise of 43% in the previous year and even +118% in 2013.

This situation is the logical consequence of a still immature market, with li le volume, in which technology is constantly evolving, marked by a surplus of businesses, most of which are of a very small size. Even more seriously, less than half of all businesses turn a profit and the bankruptcy rate is extremely high, standing at 18%.

2019 should see a slight improvement, with growth of 20%, resulting from larger contracts signed by large purchasers, notably the French military. Growth is also driven by international sales. 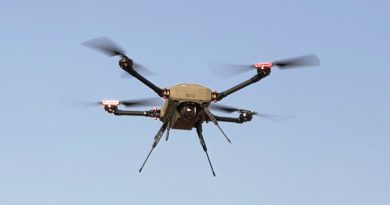 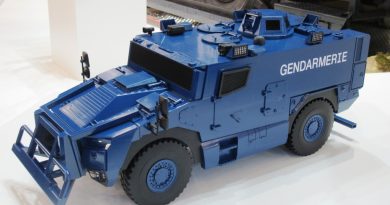 21/11/2019 Paolo Valpolini Comments Off on Nexter: the Serval goes blue 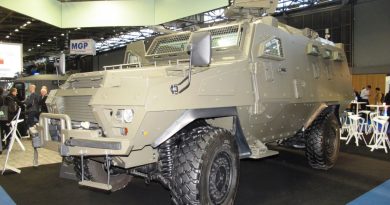