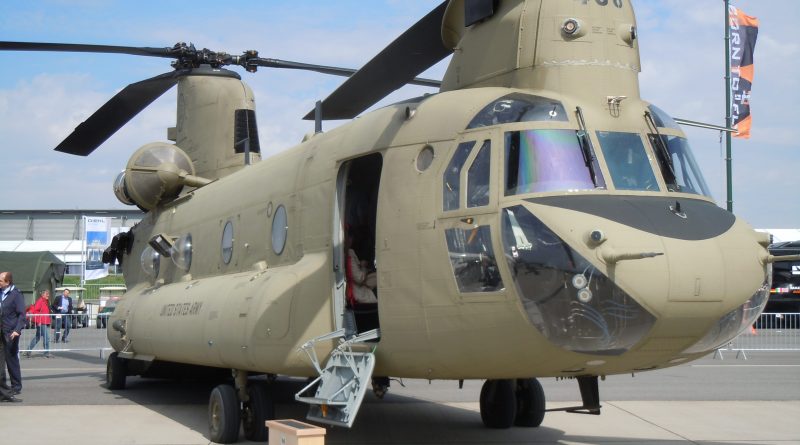 US defence giants Boeing and Lockheed Martin went head to head at ILA Berlin 2018 in their efforts to replace Germany’s existing fleet of CH-53G heavy-lift helicopters. Boeing is offering the proven CH-47F/G Chinook while Lockheed Martin is promoting the new Sikorsky CH-53K King Stallion. With a potential order for between 40 and 60 helicopters, both the US manufacturers have been building teams of German industrial partners which were revealed at ILA.

Lockheed Martin’s CH-53K pitch was boosted by US Marine Corps Assistant Commandant Lieutenant General Glenn Walters and Colonel Hank Vanderborght, USMC CH-53K program manager. They outlined the CH-53K’s superior lifting capability, it has a maximum take-off weight of 88,000 lb, fly-by-wire controls, triple hook systems capable of carrying a 36,000 lb load, a top speed of 207 kts, and large cabin facilitates loading/unloading of cargo without reconfiguring and removing troop seating. Col Vanderborght said that the CH-53K was a completely new design, it was well into its test programme and 12 of the 200 required by the US Marine Corps, were in production. The unit cost of the US Marine Corp’s CH-53Ks was quoted at US$87 million. He added that the helicopter meets all NATO heavy-lift requirements.

Sikorsky President Dan Shultz was on hand to discuss his company’s commitment to Germany and German industry. He emphasised the King Stallion’s composite construction and low maintenance and said, “It is a smart aircraft for Germany able to hold a Fennec armoured vehicle”. The first production CH-53K made it air show debut at ILA 2018 and took part in the flying programme.

With the German Request for Proposal (RfP) expected at the end of 2018 or early 2019, for between 40 and 60 helicopters, the heavyweight contestants have all to play for.