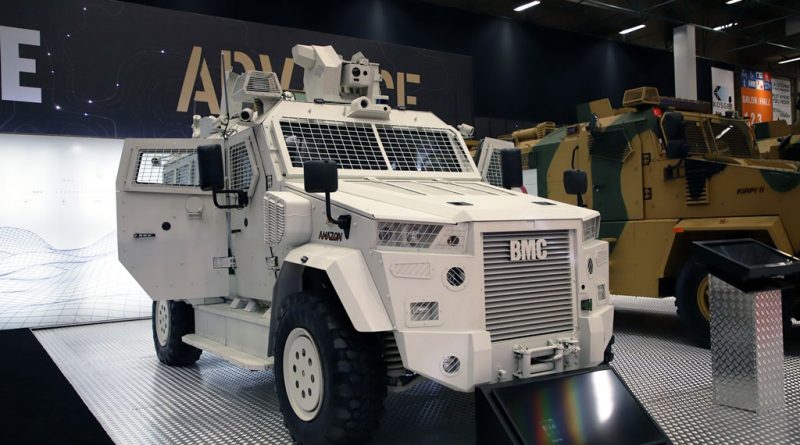 Hybrid and autonomous are the two drivers towards the future of military vehicle. BMC, the Turkish company that started producing military vehicles in 1999, unveiled at the Istanbul exhibition a version of its Amazon 4×4 multi-purpose armoured system that aims at quickly acquiring a considerable degree of autonomy.

A 14 tonnes GVW vehicle powered by a 360 hp diesel engine, the Amazon can transport up to seven people, the protection level of the vehicle remaining classified. Its mobility is ensured by independent suspensions front and rear, the vehicle being fitted with AxleTech ISAS 3000 series axles. 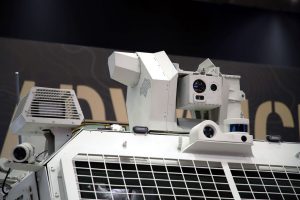 BMC chose this vehicle for developing its autonomous driving capabilities considering its mass and dimensions, and installed a front looking 3-D LIDAR (Light Detection and Ranging) coupled to a day/night camera, other cameras providing 360° situational awareness. The data provided by those sensors are fed into a computer which software allows obtaining autonomous real time mapping, tracking 150,000 points per second, providing both the map of the area as well as the potential obstacles. A screen in front of the vehicle was showing what the system was providing in term of image, with all the by-passers clearly identified. Embedded artificial intelligence would find alternative routes for the vehicle should an obstacle appear along its path. All this avoids the need to have an off-line map on board, however this is usually kept as a crosscheck item.

BMC planned to start operational testing at the end of the IDEF exhibition; this should run until late 2019, when lessons learned will be analysed allowing evolving the sensors package and the algorithms.

Before moving along the path of autonomy, BMC had already developed a remotely controlled version of the Amazon, aimed at urban and asymmetric scenarios. This allowed developing the interfaces needed to allow handling the vehicle without a driver, making it a first step towards the new solution seen at IDEF. The remotely controlled version could be operated in line-of-sight conditions up to 5 km in open terrain and 1 km in urban areas. 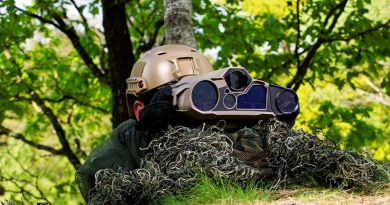 Thales: the Sophie family grows up

22/06/2018 Olga Ruzhelnyk Comments Off on Thales: the Sophie family grows up 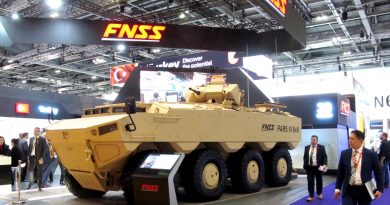