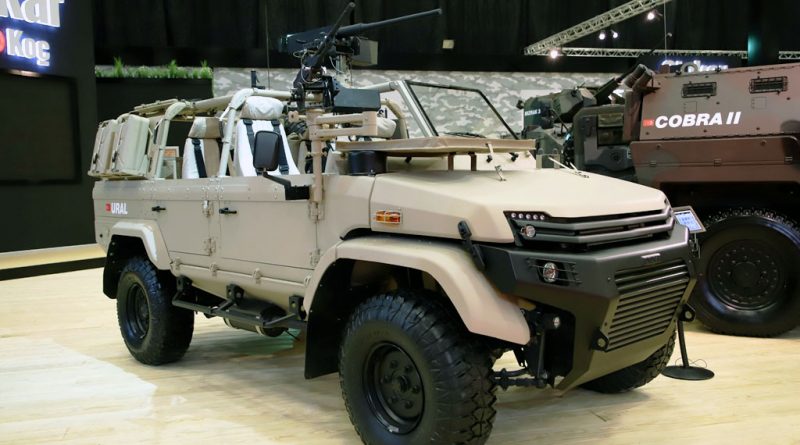 Unveiled at IDEF six years ago, the Ural light armoured tactical vehicle is now in service in Turkey, with the Police, and in other nations. When developed the aim of the company was to add to its portfolio a vehicle that was easy to fix and that represented value for money. The double wishbone with telescopic dampers independent front suspensions and the rigid rear axle with parabolic leaf springs and telescopic dampers represent a good compromise between mobility and cost. 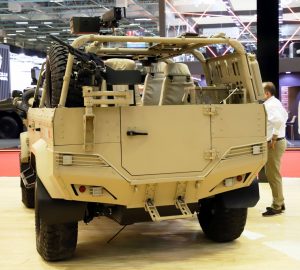 Long time ago Otokar produced soft skin vehicles, mostly Land Rover Defenders under license, and the company wants to remain in that segment. As fighting on price matters with Japanese 4x4s is quite impossible, Otokar decided to play on modularity, using the Ural chassis as the basis for a series of tactical variants. The first one is the Special Operations Vehicle unveiled at the Istanbul exhibition; the vehicle can be fitted with modular armour kits, depending on requirements, The SOV exhibited at IDEF featured an open top with roll bar while armoured panels of undisclosed level, probably Level 2, was fitted up to waist level. No instrument panel is fitted, thus no secondary projectiles would form in case of mine incident, al the electronics being under the central console between the driver and the commander. The vehicle could host up to five SF operators, two at the front, the driver and commander, the latter with a pintle-mounted 7.62 mm machine gun, a similar weapon being installed at the rear, while the main weapon was the 12.7 mm M2HB installed over the roll-bar. The vehicle was developed on company specifications, as no firm requirement has appeared yet, however according to Otokar the inquiries from the export market justify working on a similar solution. 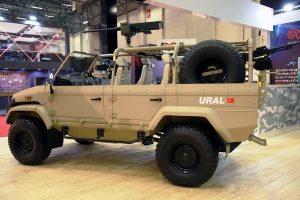 The development of the Ural into a modular platform is aimed at generating a series of tactical variants. One of the current problems of Turkish forces operating along Syria is the need of utility vehicles able to refuel and resupply the tanks which are deployed some 2 km apart from each other, light and mobile general purpose and refuelling vehicles being required, which currently lack in the Turkish Land Forces inventory. Other versions, still on CAD screens, will be devoted to indirect fire support, Otokar being busy in designing variants armed with 81 mm, 120 mm and 120 mm remotely controlled mortars.

Remaining in the firepower arena, a new turret was fitted to the Akrep IIe; known internally as Modular Turret it does not have yet a commercial name and is designed to accept Northrop Grumman Armament Systems (formerly Orbital ATK) 25, 30 and 35 mm cannons, as well as Rheinmetall 35 mm cannons. The one visible at IDEF was the first prototype and was armed with a 25 mm cannon, different versions being envisaged, with and without a commanders’ independent sight, and with modular armour protection to answer different customer’s requirements. 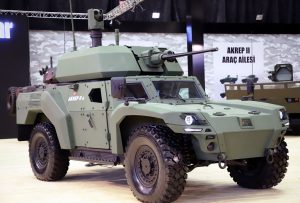 Most of those are looking for unmanned turrets, therefore Otokar is giving priority to this version, although a one-man configuration with turret basket can be derived. The idea is to combine the Mizrak-30 and the Bozok-25 turrets into a single product, with a much lower profile. A custom-made slip-ring has been adopted to minimise the inside protrusion, the prototype having the inside interface with a relatively small diameter but with a considerable height, this being changed into a greater diameter but much lower height to increase inside available space. The coaxial machine gun on the right side of the main cannon can go up to 12.7 mm, however the standard one is 7.62 mm; the Modular Turret has been designed from inception to accept a remotely controlled weapon station on its roof, under the Turret-on-Turret concept.

This, as well as the main cannon and the coaxial machine gun can be reloaded from the inside, Otokar currently working on the ammunition load, which should be of 210 rounds in the 30 mm version, with double feed and thus the possibility of using two different types of rounds. Otokar is looking at its Ucok as ToT RCWS, although this will need some changing to be rechargeable from inside. The ToT requirement comes mainly from internal security forces. For military users the company is also working on adding antitank missiles, the plan being to install one twin launcher per side.

The current weight estimate is around 2,000 kg, designers aiming at a 10 per cent weight reduction for the base version, maximum weight for up-armoured versions being set at 2,500 kg. Otokar plans to have the running prototype ready by year-end, with first firings to be carried out in early 2020, aiming at the qualification by late 2020. 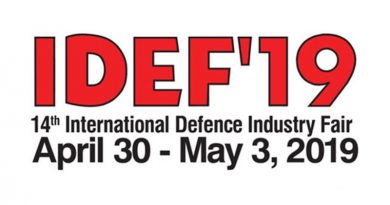 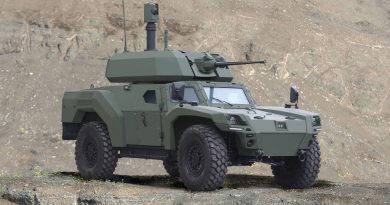