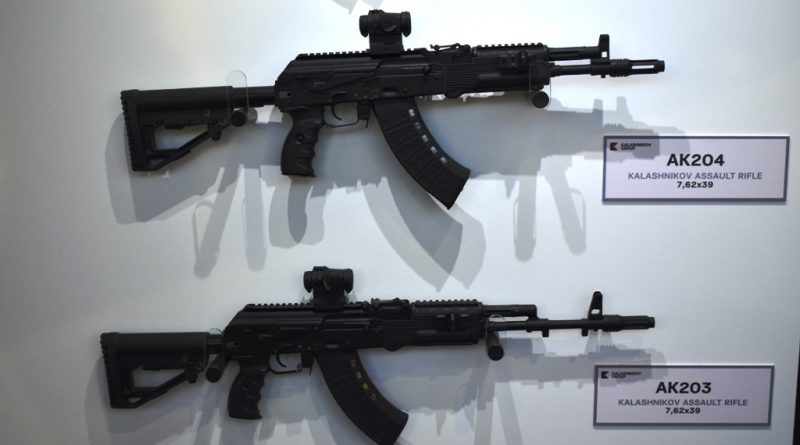 Russia`s leading manufacturer of small arms, the Kalashnikov Group (a subsidiary of State Corporation Rostec), has developed the AK-200 family of assault rifles. The new firearms have been unveiled at the IDEX 2019 defence show being held in Abu Dhabi, the United Arab Emirates, on 17-21 February.

According to Kalashnikov, the new assault rifles are designed to replace the venerable AK-100 family and the organic firearm of the Russian military, Kalashnikov AK-74M.

The AK-200 5.45 mm assault rifle is the baseline firearm of the AK-200 family. As mentioned above, it is chambered for the M74 cartridge that is the organic type of ammunition of the Russian military. According to the manufacturer, the assault rifle is 705 mm/880-940 mm long (with folded/unfolded telescopic stock, respectively), weighs 4.1 kg with empty magazine, and is fitted with a 415 mm barrel. The AK-200 is fed by 30-round polymer magazines that are interchangeable with previously developed bakelite and plastic box-type magazines of the AK-74 and AK-74M. The new firearm features a rate of fire of 600 rounds per minute and fires in automatic and semi-automatic modes.

The AK-201 is a modification of the AK-200, which is chambered for STANAG-compatible ammunition. Except for the calibre, the specifications of this firearm are equal to those of the AK-200.

The AK-202 is a shortened variant of the AK-201 with more compact dimensions and lower weight: it is 775-835 mm long (590 mm with folded telescopic buttstock) and features a 314 mm barrel. The carbine weighs 3.8 kg with empty magazine.

The AK-203 is designed to replace the venerable AK-103 7.62 mm assault rifle. The specifications of the weapon are almost identical to the baseline AK-200 firearm.

Unlike the AK-74M, the members of the AK-200 family are fitted with Picatinny rail interfaces for sight and tactical accessories, folding telescopic buttstocks, and ergonomic pistol grips. The organic muzzle brake has been replaced by a slotted one. The cleaning rod has been removed in order to facilitate installation of an under-barrel grenade launcher.

At the IDEX 2019, the Kalashnikov Group has demonstrated the AK-203 assault rifle and the AK-204 carbine, as well as the AK-15 assault rifle. The firearms have been fitted with optical-electronic scopes by Infratech; the AK-203 features a magazine of increased capacity. 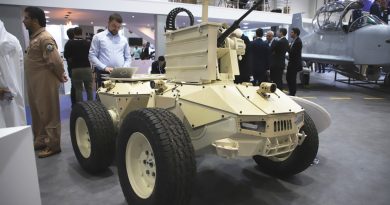