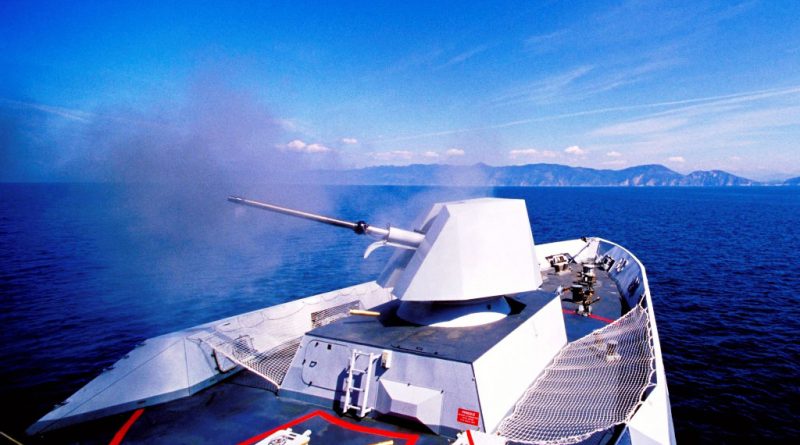 Rome, 31 October 2018 – Leonardo signed a contract with the Bundesamt für Ausrüstung, Informationstechnik und Nutzung der Bundeswehr, the German Federal Office in charge of defence acquisitions, to provide seven OTO 76/62 Super Rapid systems that will equip the new K130 corvettes of the German Navy. The contract also includes training and spare parts supply.
With this new acquisition, Leonardo’s naval gun becomes the reference defence system for the German Navy, which has already tested the capabilities of the compact version of the system, integrated on the first batch of corvettes following a previous contract.
The signing of the contract strengthens the historical collaboration with the country and with the Agency. Leonardo has indeed provided the first naval artillery systems, in particular the 76/62 Compact, starting from the 70s; the most recent supplies include the 127/64 Vulcano naval guns and the Hitrole 12.7 turrets currently on board the F125 Frigate.
The OTO 76/62 SR system, part of Leonardo’s naval artillery offer, represents a commercialsuccess. In service with almost 60 Navies worldwide, the system is the only medium-calibre, together with compact version, capable of sustaining a fire rate of up to 120 strokes per minute, a fundamental requirement for defence in asymmetrical war scenarios.
It is characterised by the lightweight, accuracy and use of guided ammunition. The flexibility of use makes it particularly suitable for anti-aircraft and anti-missile defence and for point defence. It can be integrated on any type and class of ship, including smaller units.
Depending on the configuration, the OTO 76/62 Super Rapid could include the STRALES capability to fire DART guided ammunition specifically designed for the engagement of fast manoeuvrings targets, the VULCANO GPS-guided long-range ammunition able to engage a target with an excellent accuracy as well as the Multi Feeding (MF) device for the ammunition automatic handling.
Recently, the OTO 76/62, which has been developed more efficient and effective, has successfully completed a cyber assessment that guarantees the product against any hostile cyber-attacks, particularly threatening in increasingly sophisticated systems.