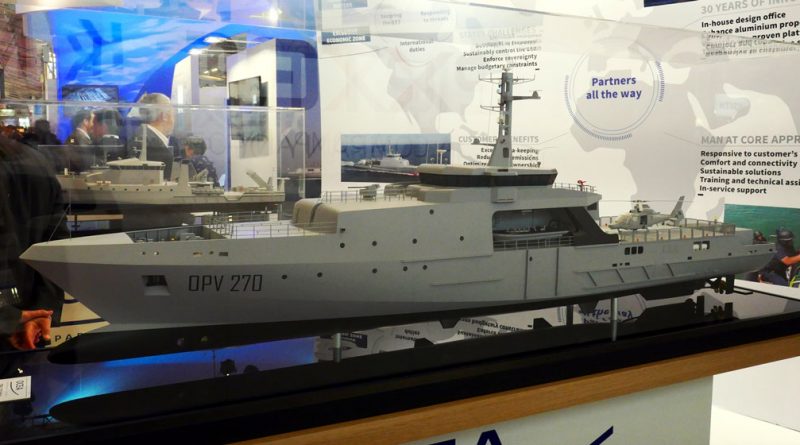 Specialized in the design, building and support of aluminum vessels up to 85 meters, Ocea has rapidly expanded since its establishment in 1987, gaining an important position on the international market. With 95% of the turnover coming from export, the Ocea shipbuilding company has rapidly expanded its family of aluminum-built OPVs, unveiling at Euronaval 2018 a new 72-meters design known as OPV 230. Based on the previous OPV models development, shipbuilding experience and operational feedback, including the OPV 190 Mk II (58 meters) and the OSV 190 SC-WB in service with the Senegal and Indonesian navies, in addition to the largest-built aluminum 84-meters model OPV 270 under construction for the Philippines Coast Guard, Ocea shipbuilder has developed the 72-meters design OPV 230 which so-far completes the shipbuilding family between the 46-meters of the OPV 150 model to the 84 meters of the OPV 270 platform.

With an optimized fuel consumption and CO2 emissions thanks to the reduced weight (compared to steel) of aluminum-built platform hulls, which according to data provided by Ocea and based on trials of the Fouladou OPV 190 Mk II (58 m) delivered in 2016 to Senegal navy could generate savings of 5 million liters of fuel and 13,500 tonnes of CO2 over 20 years compared to equivalent OPV in steel, the OPV 230 is characterized by important innovations. With a 36-member crew with accommodation for additional 30 personnel, this 72 -meters OPV offers high performances and controlled environmental footprint and cost of ownership thanks to its hybrid propulsion allowing to achieve speeds up to 28 knots and to use electric motors 60% to 70% of the operating time, reducing drastically the cost of operation. In addition to the exterior design and interior comfort fully in line with the OPV 190 and OPV 270 model designs, the new OPV 230 versatility is enhanced by the incorporation of a closable mission bay ahead of the stern area, capable to accommodate up to two 8.50 m RHIBs and allowing the boarding of additional equipment or containerized mission modules, a convertible and versatile area fore of the helicopter deck able to host UAVs, special forces or survivors, in addition to a reconfigurable multipurpose stern area under the helideck. The latter platform can accommodate a 5-tonnes helicopter. Moreover, the OPV 230 integrates all the detection, communication and situation awareness capabilities to fulfill all the maritime safety missions in the Exclusive Economic Zone (EEZ), in addition to an armament fit compatible with constabulary missions, notably a 40 mm gun mounting. Among the smaller fast boats production family, Ocea also unveiled a new family of interceptors including the ordered four C-Falcon for the Nigerian navy, which modular design is capable to accomplish a variety of missions, from fast transport to anti-surface operations.

In addition to the new OPV 270 design, Ocea representatives provided during Euronaval 2018 an update on acquired contracts and on-going shipbuilding and delivery programmes. On April 2018, Ocea delivered the 58-meters OPV 190 Mk II platform to the Senegal navy while later on the company began the construction of the 60-meters OSV 190 hydrographic vessel (based on the two-vessel same design for the Indonesian Navy) to be delivered by the end of 2019 for the Nigerian navy. The latter has also received in April two 35-mters FPB 110 MkII fast patrol boats which adds to the four 24-meters FPB 72 MkII (for a total of seven with one additional to be delivered in 2019) and one 32-meters FPB 98. African continent’s undisclosed orders count for 10 FPB 98 Mk I boats. During the 2017-2018, Ocea has also completed the delivery of four 24-meters FPB 72 MkII to the Philippines Coast Guard. The latter has also ordered the biggest OPV 270 design OPV so far being built by the company for delivery in August 2019. On last September, Ocea has also acquired an order from the French Ministry of Finance to equip the Customs service with two FPB 100 MkII, with option for an additional one, while new tenders for both national military and law enforcement services could open to potential sales of its aluminum OPV family.