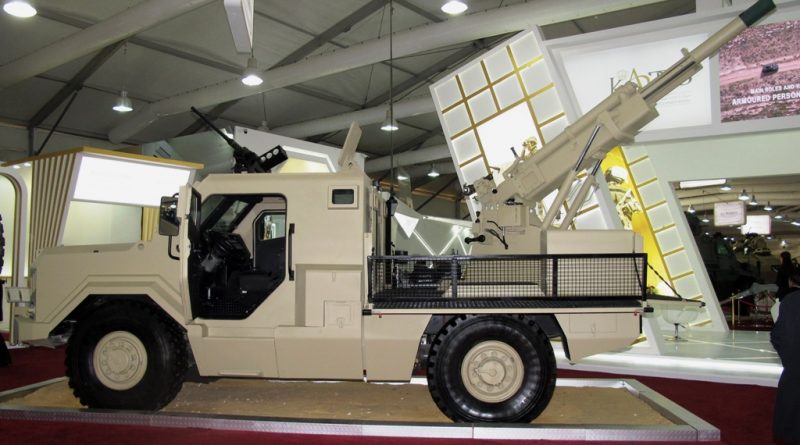 How much indirect fire might become part of Special Forces inventory remains under discussion, integral firepower fighting with heavier logistic footprint and reduced mobility. That said, two light 105 mm artillery systems installed on light chassis were challenging each other at a few hundred meters distance. The weapon system installed on an AM General HMMWV was developed by the Mandus Group that developed a hybrid special recoil system capable to reduce recoil efforts to a level sustainable by light platforms.

The barrel is the same of the M119 US Army light howitzer, produced by BAE systems, which can reach over 19 km using RAP assisted projectiles, shorter ranges being reached when using M101 ammunition. The HMMWV is fitted with rear spades that stabilise the vehicle during firing, traverse being on 360° while rate of fire is of eight rounds per minute for three minutes. AM General and Mandus teamed in late 2016, the artillery system developer having before installed its system on a European chassis. AM General is now Mandus exclusive partner and is the worldwide distributor for Hawkeye. The US is looking at the technologies and tests and demonstrations are being carried out with the Amy, while a requirement for a system of that category has been issued in at least two countries. 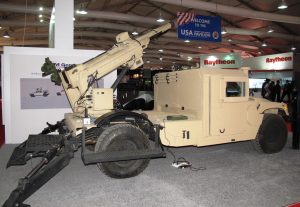 The second contender in this field that was present at SOFEX could be seen in the KADDB pavilion. Four years ago at SOFEX KADDB unveiled a truck mounted system in the form the firing element of an M102 towed howitzer installed on a DAF 4×4 truck. Two years ago a Chinese howitzer was shown installed on an Al-Wahsh 4×4 armoured vehicle. In 2018 this has further evolved, and an M102 was seen this time on the Al-Whash. Based on a Tatra 4×4 cross country chassis, powered by a Cummins engine providing 370 hp coupled to an Allison 6-speed automatic transmission, the system is clearly much heavier than that proposed by AM General, being derived from an armoured vehicle, GVW being set at 14.5 tons. 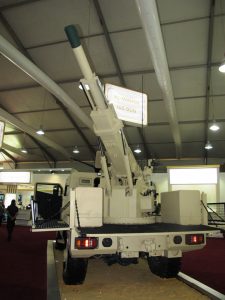 The howitzers points backwards and can fire on a ±90° azimuth arc, while elevation is between -5° to +75°, which allows to use it not only as an indirect fire system but also against targets such as buildings and light vehicles i direct fire mode. The four-man crew is hosted in the cabin that provides a Level 1 protection that can be increased to Level 2. Two doors in the back part of the cabin allow artillerymen to reach immediately the gun platform as soon as the vehicle stops. No outriggers are needed to stabilise the chassis during firing. Currently laying is manual, however KADDB is ready to install an automatic laying system, possibly in cooperation with a foreign third party; in the current version the Al-Whash 105 carries 22 rounds. This artillery system has been fully tested by KADDB and is under testing by the Jordanian Army.