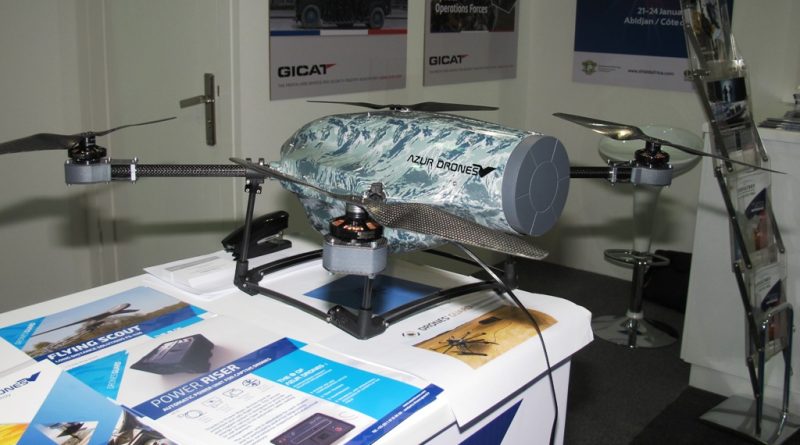 A major player in the civilian drone sector in France, Azur Drones is proposing its equipment and services to the Middle East, considering the number of critical infrastructures present in the area. Its solution comes under the name of Drones Guard and includes three different flying elements, one fixed and two rotary wing. The fixed wing element is the FS-420, a flying wing with a 4.2 meters wingspan and an MTOW of 25 kg. Powered by a gasoline engine, it has a cruise speed of 80 km/h, maximum speed being 130 km/h, and can reach a maximum altitude of 4,500 meters. With an 8-10 hours endurance, it can travel up to 1,000 km, the data link having a LOS range of around 60 km. Built in carbonfiber, it takes off with a catapult and is recovered by landing.

It is fitted with an Asio 155 payload with two channels, the electro-optic having a FoV from 1.7° to 57.8°, while the thermal channel has a fixed FoV, either 17.7° or 32.8°. Detection and recognition ranges are respectively 10 km in E/O and 2 km in TI, and 3 km in E/O ad 750 meters in TI, daytime identification range being 750 meters. The same sensor, which weighs 1.5 kg, is installed on the FG-800, the eight-rotor VTOL captive UAS which has an MTOW of 8 kg; the system is installed in a vehicle, preparation time being less than 20 minutes. The advantage of such system is its persistency, as power is provided by a ground unit, known as Power Riser, the tether also allowing a 100 Mb/s data transfer between the sensors and the ground station.

The PW-100D, purposely developed for the FG-800, provides 1,800 W and its optical fibre cable is 100 meters long. It  features a smart reeling system which automatically deals with the cable tension and which launches and recovers the system. The theoretical endurance of the FG-800 is obviously unlimited, the UAS electric motors being powered from the ground. The same applies to the smaller FG-210, a four-rotor, 6.14 kg VTOL UAS, when used in the tethered mode. It can however also be used as stand-alone, with a maximum endurance of 24 minutes. It can be fitted with two payloads, uncooled thermal camera weighing 270 grams. Transmission distance varies between 2 and 7 km, depending on local regulations. Azur Drones is ready to provide not only the hardware but also training and technical assistance, as well as trained personnel to operate the systems.