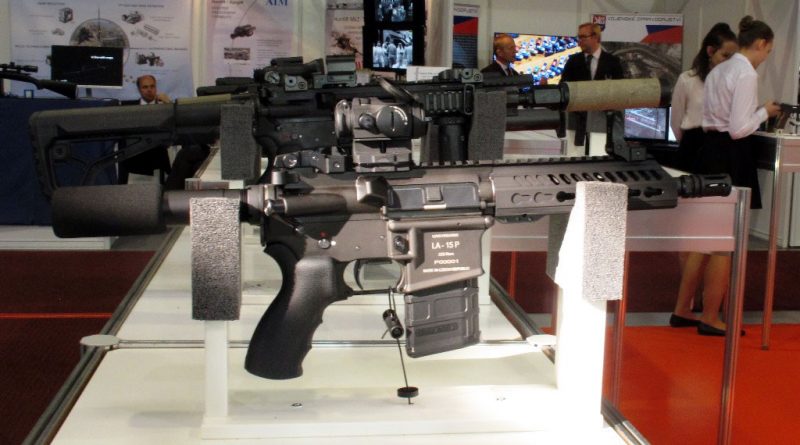 The Czech company started its development due to some requests by Police forces outside the European Union, the length of 590 mm and the lack of a stock allowing qualifying it as a pistol, notwithstanding the calibre, which is definitely the same of assault rifles and carbines. 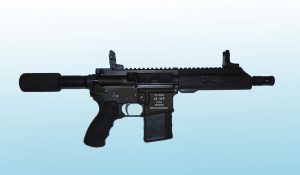 The LA-15 P is based on a direct gas impeachment mechanism and is fitted with a 7.5” (190 mm) cold hammered barrel with blue finishing and a 1 turn in 7” rifling twist; the barrel ends with a 1/2 “-28 UNED thread allowing the mounting of the standard “M4” like flash hider or of a suppressor. According to Luvo Prague the barrel has a life of approximately 26,000 rounds, precision being 2 MOA at 100 meters range. The upper and lower receivers are built in forged 7075 T6 aircraft aluminium with hard anodised surface finishing; the pistol features a full length Picatinny rail on the top and shorter Keymod rails on the side of the handguard, flip-up sights being provided as standard, the weapon on exhibition being fitted with a red dot sight.

The two positions selector is located above the pistol grip while the magazine the magazine catch is aft of the trigger guard; the pistol is provided with a standard 20 round magazine, however 5, 10 and 30 round-magazines are also available. The weapon on show was the very first prototype, marked P00001, Luvo Prague having finished the first shooting tests of the new weapon two days prior the opening of Future Forces Forum.

Beside the new pistol, at the Prague exhibition the company also announced that it is starting producing silencers, flash hiders and compensators for the whole range of its firearms.