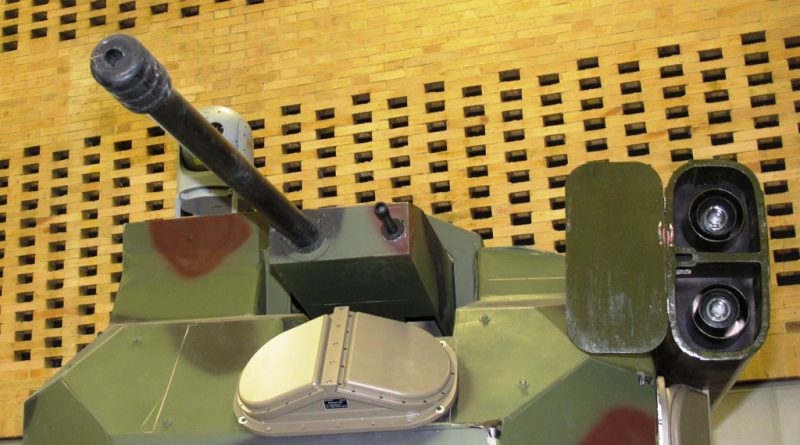 While the Textron Commando 4×4 in service with the Colombian Army was exhibited in the outside area, inside another vehicle of that type was visible at the Thor stand, fitted with a new unmanned turret currently under development. Known as Pegaso in Colombia, this vehicle is currently equipped with the UGWS one-man turret armed with a 40 mm AGL and a 12.7 mm machine gun.

To considerably increase its firepower Thor is developing the new T30 Myolnir, for which it has obtained a contract by the Colombian Ministry of Defence. Unmanned, is main weapon is the Orbital ATK Mk 44 Bushmaster Automatic Cannon in 30 mm calibre, with a coaxial 7.62 machine gun at the left. The gun elevation is between –15° and +60°, the turret having full traverse. Top right we find a Controp optronic stabilised system, allowing sighting and surveillance, while all round four RADA’s Compact Hemispheric Radar (CHR) antennas ensure detection, tracking and classification of all relevant threats such as RPGs, ATGMs, and gun rounds.

On the left side a twin launcher for Spike missiles is fitted. The total weight of the T30 is if of about 900 kg. The Colombian Army will probably take a further decision on acquisition once all qualification tests will be concluded. Thor is the Colombian turret specialist, and its systems are fitted to many of the Colombian Navy ship.