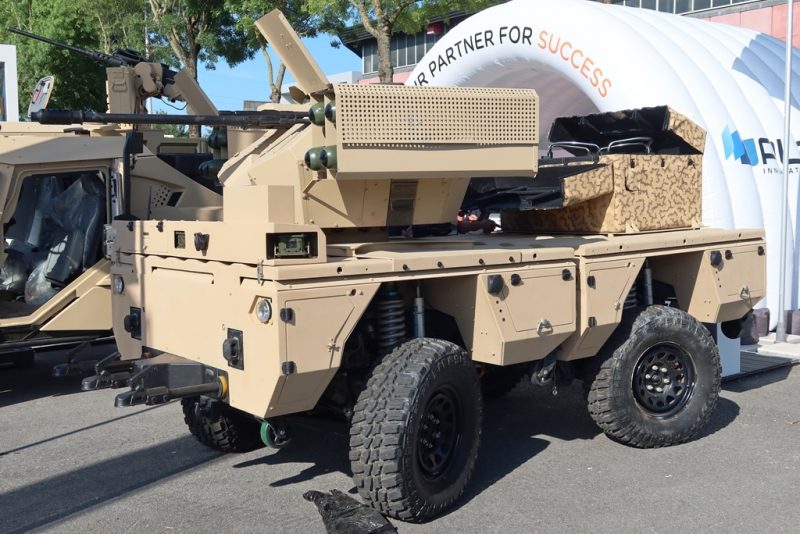 A benchmark in the armour world, Plasan of Israel unveils at Eurosatory a product in a wholly different field, that of energy, but not only.

The ATeMM, acronym that stands for All-Terrain electric Mission Module is a multi-mission electric vehicle platform that can be easily configured according to the mission. The single module is fitted with a single axle and has a curb weight of 1,600 kg with a 1,150 kg payload. It is 1.8 meters long, 1.9 meters wide, and ground to bed it is 1.2 meters high. It is electrically powered, a permanent magnet synchronous motor providing 200 kW of power, equivalent to 190 hp, providing a 5,150 Nm torque at the axle. The motor gets the energy from a 47 kWh power pack: in the prototype Li-Fe batteries are used, however production versions will be getting Li-ion batteries. The portal axle is designed for off-road operations, the ATeMM being fitted with independent airbag suspensions and with 285/70 R 17 Run Flat tires.

Having a single axle, the ATeMM is attached to a vehicle, total length with tongues being 2.3 meters; “attached” not “trailed” is the right word, as the ATeMM has its own propulsion, therefore a 4×4 vehicle is in fact transformed into an articulated 6×6, increasing its mobility rather than being hampered by a typical trailer, the Plasan module featuring synchronised steering, braking and driving. The link between the vehicle and the ATeMM has a limited rotation on the pitch and roll axis, while it is fixed on the yaw axis, three tow hooks ensuring rigidity. “It is all about manoeuvrability, especially in reverse where trailers tend to ‘jackknife’. The lack of yaw freedom is compensated by the ATeMM steering axle, and moreover with a rigid coupling the module contribution to the overall mobility is higher,” Nir Kahn, Director of Design at Plasan, explains to EDR On-Line. At Eurosatory the ATeMM was exhibited aside the Wilder, the light armoured vehicle also unveiled by Plasan at the Paris exhibition, which is already fitted with a triple tow hook to be coupled with the ATeMM as it can be seen in the following VIDEO. Linked to a hybrid propulsion vehicle the on-board power can considerably extend its range in electric-only mode; that same power can however be exploited in many other ways, to ensure long silent watch operations, recharge soldiers batteries, etc. The battery pack can be reloaded by regenerative braking as well as by coast regeneration, using the towing vehicle energy to move the wheels which are no more engaged and act as a dynamo, allowing the ATeMM to reach its destination with a fully loaded battery pack, even if the trailer powered some devices during the movement. On the other hand the ATeMM considerably increases the payload, as it can transport over one tonne on its flatbed. This can be exploited to install various types of systems, think about a SATCOM terminal that would be powered by the trailer battery pack, a lighting system, or any other type of application, the off-board vehicle power being 20 kW.

Until now we considered only a single ATeMM module. Let’s put two together, length, curb weight and payload are doubled, as well as power and battery capacity. But now the system can stand by itself, or again be towed by a vehicle. The coupled modules can be considered as a two-axle add-on platform that generates an 8×8 vehicle, further increasing the platform capabilities in terms of endurance and payload, as well as mobility.

However this is not the only way the ATeMM can be used. The coupled modules are autonomous-ready, which means that a “brain” can be added in terms of sensors and processing capacity, transforming the 4×4 electric platform obtained by joining to ATeMM Modules into an unmanned ground vehicle with considerable payload and on-board energy. This allows it to be fitted with payloads of various kinds, ranging from ISTAR sensors as well as RCWS armed with automatic weapons up to 30×113 mm cannons, or it can be used as a logistic vehicle to carry a considerable load on the frontline and eventually bring back casualties to the nearest dressing station.”

At Eurosatory the ATeMM is packed with firepower, as the front module is equipped with an RCWS armed with a 30×13 mm cannon and eight Rafael Spike missiles, four per side. Moreover on the rear module a HoverMast Lite Platform is installed, the tethered quadcopter being able to carry a 10 kg payload up to 300 meters hovering height.

The level of autonomy will depend on the complexity of the system installed, the lower one being remote control. “We already tested a 4×4 with a full autonomy package,” Nir Kahn says, “and on this issue we are working with partners. Moreover I would like to point out that we can put together up to four ATeMMs, generating an 8×8 vehicle with 4.6 tonnes of payload capacity.” The ATeMM being easily transportable undersling, he figures out an airmobile manoeuvre where four helicopters transport the same number of ATeMM modules, these being then linked together and used as a fighting vehicle. Plasan has already launched a pre-production run of its ATeMM, some units being currently under test n Israel and in the United States. “We consider the ATeMM at TRL 7, and Eurosatory is the perfect opportunity to launch it on the market, in front of a high number of foreign delegations and experts,” Nir Kahn concludes. 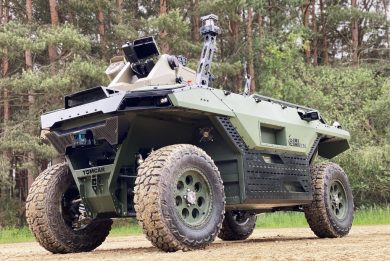 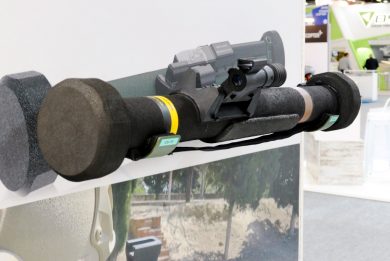 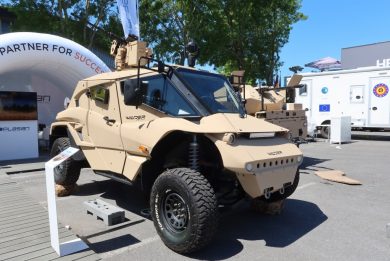